Threats to the freedom of speech and privacy of citizens, NGOs and businesses are on the rise in an increasing number of countries, as more governments attempt to stymie dissent and control the public narrative around their actions.

Freedom of Expression and Right to Privacy issues to watch

Our annual Human Rights Outlook reveals that attacks on these basic freedoms are getting worse. We’ve identified a significant uptick in the number of countries rated ‘extreme risk’ in our Freedom of Expression and Right to Privacy Indices over the last two years, which are endangering the rights of 3.38 billion people, equivalent to 45% of the world’s population.

The global rankings, which rate 198 countries on issues such as the erosion of data privacy, mass surveillance, crackdowns on protest and the jailing of journalists and activists, point to a rising tendency for governments to adopt more extreme measures to protect their own interests.

In 2019 our Right to Privacy Index showed a total of 58 countries were categorised as ‘extreme risk’ compared to 53 in 2017, representing a 9% increase. Similarly, there is an upward trend in ‘extreme risk’ countries in our Freedom of Opinion and Expression Index, up from 52 in 2017 to 58 in this year’s index – an increase of 11%.

Why should companies pay attention to a decline in free speech?

Why should companies pay attention to a decline in free speech?

Worryingly, the erosion of these rights is creeping beyond the most authoritarian states, such as North Korea, China, Saudi Arabia and Russia, as more countries adopt the autocratic playbook for controlling dissent and solidifying power.

The countries dropping into the ‘extreme risk’ category of the two indices over the last two years include: Djibouti, Somalia, Zambia, Tanzania and Kenya for the right to privacy, and Venezuela, Qatar, PNG, Kyrgyzstan, Uganda, Morocco and Mozambique for freedom of expression.

Cambodia was the only country to fall into the highest risk category across both issues. Key reasons behind the increase in risk include a crackdown on free speech by the Hun Sen government in the lead up to national elections in 2018. This saw extensive online surveillance put in place, including an order to transmit all internet traffic through a state-owned data management centre. The country has also seen a sharp increase in arrests and prosecutions for dissenting online speech.

We've used an aggregate of our Freedom of Expression and Right to Privacy indices to show the trend in scores for 10 ‘extreme risk’ countries, that are highly autocratic or have growing authoritarian traits. Countries that already have a significant grip on the rights of citizens, such as China, Saudi Arabia and Egypt, register little movement, while those trying to exert more control, including Cambodia, Laos and Turkey, have seen a significant rise in risk over the last two years. 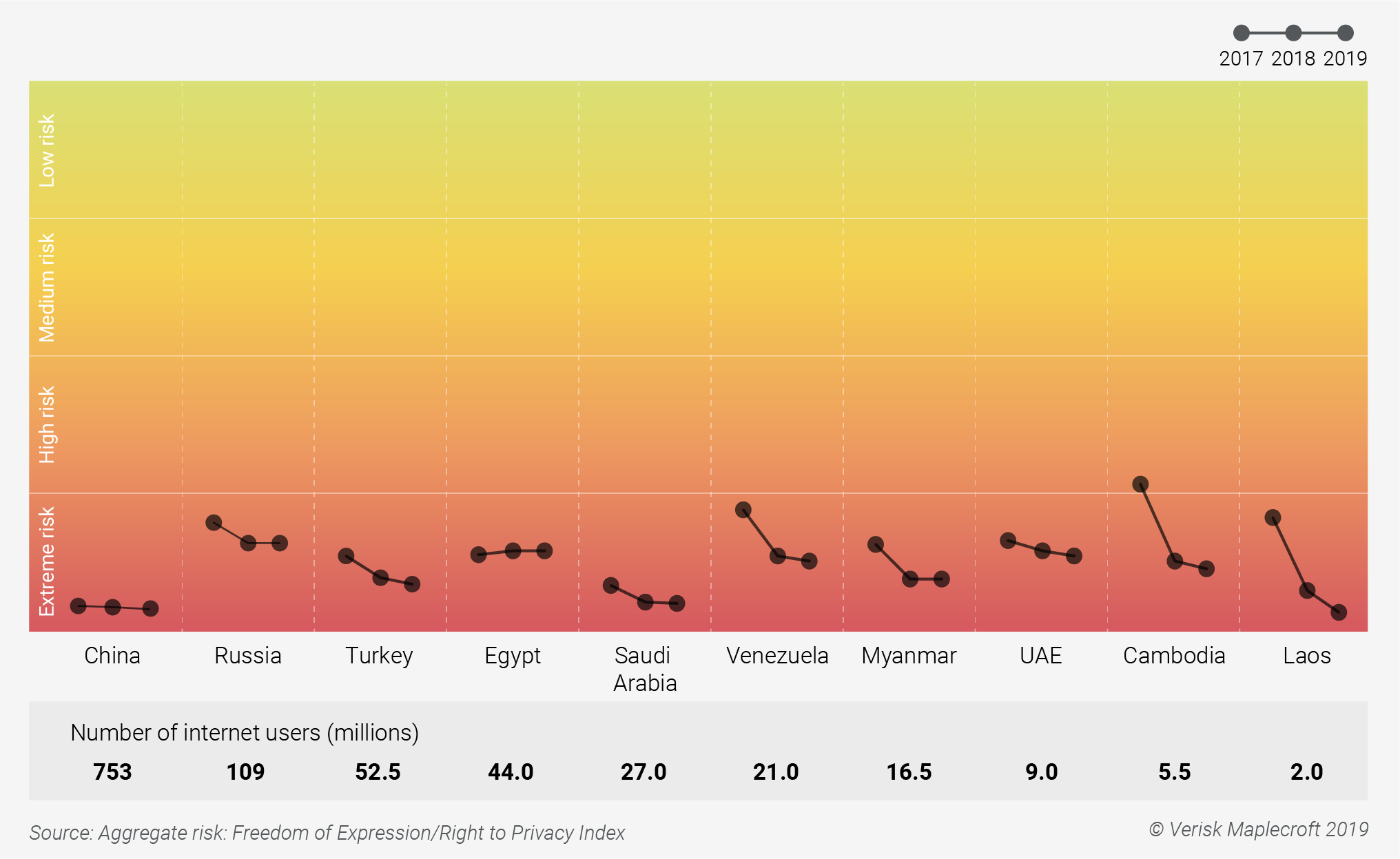 The data illustrates the number of internet users that face extreme risks of online restrictions. China, home to a fifth of the world’s internet users, faces the most severe internet restrictions and has the lowest aggregate score for Freedom of Expression and Right to Privacy among the 10 selected countries. China was also the focus of our recent Supply Chain Risk Outlook, where we looked at the US-China trade war and new pockets of manufacturing hubs opening up around Southeast Asia. Read more on labour violations in China and Southeast Asia.

Operating in jurisdictions where the internet is tightly controlled presents significant operational and reputational risks to business. The protection of online data, including browsing history, is crucial to ensure the safety of citizens who can be targeted for their political or religious views and for securing private company information and intellectual property.

The business challenges related to freedom of speech and privacy are most obvious for ICT, tech and media firms, but there are direct and indirect implications for all foreign companies.

Declines in privacy and freedom of expression can signify where the rule of law may be under threat from governments, which can undermine the overall business environment. A red flag for this is the targeting of media organisations and journalists by governments to silence criticism and remove scrutiny of their actions. According to the Committee to Protect Journalists (CPJ) 250 journalists were imprisoned in 2018, with China, Egypt, Saudi Arabia, Turkey and Vietnam responsible for 167 of these.

Under the leadership of President Erdogan, Turkey jailed more journalists than any other country in 2018, which is reflected in its ‘extreme risk’ rating and fall from 31st to 22nd highest risk in the Freedom of Expression Index.

While these risks are undoubtedly spreading, some authoritarian states are now entering a dangerous phase of consolidation. China, which features in the top 10 highest risk countries for both freedom of expression and the right to privacy, is currently developing the world’s most sophisticated mass surveillance system, which will have significant implications for citizens and foreign businesses operating there. The controversial Social Credit System, expected to be implemented nation-wide by 2020, has already been used to restrict free movement of those deemed to be critical of the state. It will also be used to monitor organisations, which could result in companies with poor social credit scores losing market access.

China’s status as one of the world’s highest risk countries for these issues is not likely to improve.