As more reports emerge about ongoing human rights abuses in China’s Xinjiang region against the indigenous Uighur population, the likelihood of more companies being swept into controversy over the use of forced and child labour in Xinjiang increases.

The supply chains of apparel brands have already been linked to labour rights abuses, but there is evidence to suggest these violations could move beyond the sector and even China’s borders, as raw materials produced in Xinjiang are being used in manufacturing in other countries.

Number of mass detentions camps expanded over the last 2 years

Ethnic tensions have simmered in Xinjiang for decades, but bloody riots in 2009 marked the beginning of a new chapter of escalating violence that, in turn, triggered a heavy-handed security crackdown. These include: separating children from their families to indoctrinate them into Han Chinese culture and the mass detention of young adults in custom-built internment camps over government fears they may be susceptible to extremist activities.

Beijing claims that the forced labour engaged at these facilities is vocational training meant to help students integrate into Chinese society and improve their economic well-being. However, the government line on this won’t help the reputation of brands that are found to be associated with widespread violations of the rights of hundreds of thousands of Uighurs.

Estimates suggest that over a million people have been detained, though it is difficult to determine accurate numbers because of reporting restrictions in the region. There is evidence that can help gauge the scale of mass detentions. The Australian Strategic Policy Institute (ASPI) has created a database of known detention facilities in the region and tracked the build-up of existing and new facilities since 2016. The map shows a substantial percentage increase of known and suspected detention facilities in Kashgar, Hotan and Urumqi between Jan 2016 and Sep 2018. 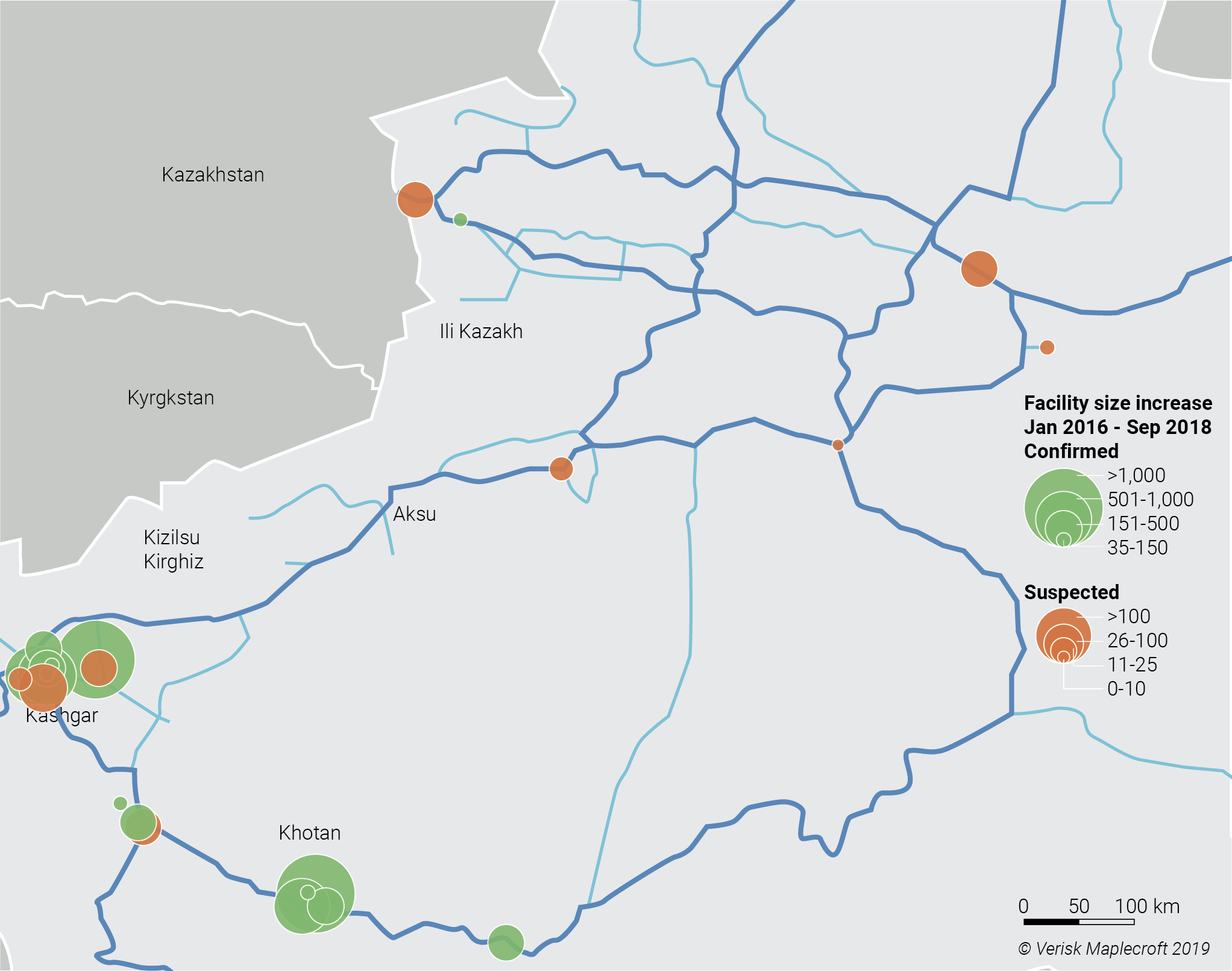 Given the lack of solid information emerging from the region, standard due diligence practices are unlikely to be effective in preventing links to violations in the manufacturing of goods in Xinjiang. So far, brands in the apparel and food processing sectors have been linked directly to factories using forced labour at the re-education facilities. However, there is evidence that suggests that all manufacturing supply chains linked to China are at risk of having association with forced labour and other abuses in the region.

Following the emergence of reports about the use of forced labour in the camps, the Chinese government has used state-run media to try and put a more positive spin on the facilities. We researched reports in Chinese language media that contained statements from government officials about the types of ‘vocational training’ detainees are receiving in the camps. These state that many of the re-education camps provide training in apparel and footwear manufacturing, food processing and electronics manufacturing. It is likely that if components for these sectors are being made by detainees, the government will do its best to make them untraceable to other supply chains.

Since 2018, news outlets have been uncovering greater details about the abuses carried out by the Chinese government in Xinjiang. As these reports have emerged, the public has become more aware of the situation and brands sourcing goods from China are starting to face criticism over their failure to address potential links of abuses to their supply chains.

To quantify the increased risk to brands, we used natural language processing to examine anonymised data from Twitter’s API to trace the volume of tweets about forced labour in Xinjiang’s detention facilities between January 2017 and June 2019.

Figure 2 shows there has been a sustained high-volume of attention on the issue since reports on the detention centres emerged at the end of May 2018, with mentions spiking at the end of 2018 following reports that forced labour has been linked to apparel supply chains.

The abuses against Uighur communities in Xinjiang go beyond the use of forced labour in re-education centres. The production of key raw materials from the region, many of which play an important role in all manufacturing in China, is also linked to abuses such as forced and Child labour.

The greatest raw material risk is linked to the production of cotton. China is the world’s largest producer of cotton and according to China’s National Bureau of Statistics 74.4% of its cotton is produced in Xinjiang. According to our commodity risk assessment, Chinese cotton has been directly linked to child and forced labour, as women and children have had to work in the cotton harvest to make up for the lost wages of detained men.

Due to the prevalence of Chinese cotton in the global apparel industry, China is a major exporter of cotton-based textiles to other garment producers in the region such as Bangladesh, Cambodia and Vietnam, links to abuses in Xinjiang are likely to spread well beyond China’s borders. Other materials to look out for include cashmere wool, which is often imported into the region from Mongolia to be processed in factories.

As China expands its Belt and Road initiative, Xinjiang will be a major springboard for Chinese economic activity into Central Asia. The region’s importance is one of the driving factors behind Beijing’s tightening grip over Uighur communities. Therefore, abuses faced by local communities are also likely to escalate.