What does a Biden presidency mean for Asia Pacific?

by Miha Hribernik and Hugo Brennan and Joseph Parkes and Sofia Nazalya, 23 November 2020

Although US President-Elect Joe Biden has yet to unveil his full foreign policy team, a range of policy priorities are already clear. A return to multilateralism and greater emphasis on climate change are just two significant departures from ‘America First’ under President Donald Trump.

However, Trump still has some 60 days remaining in office. Recent measures – including a ban on US investment in 31 military-linked Chinese companies – suggest that the outgoing administration will likely continue making foreign policy moves right up until inauguration day in January 2021.

We explore the implications of a Biden presidency, and a potentially messy transition in Washington, on Asia Pacific below.

US-China competition to endure under Biden

How US-China relations evolve under Biden will partially depend on the situation that the president-elect inherits. Reflecting the high potential for deterioration during the transition, we assign a 24% probability to the US and China engaging in a ‘militarised dispute’ – an event encompassing the threat, display or use of force – before President Trump departs the White House. A key driver behind our assumption is that we expect Trump to direct much of his ire towards China; the source of the pandemic that ultimately sealed his electoral defeat.

While a Biden White House is unlikely to escalate Trump’s trade war, pressure from Congress suggests that it is also unlikely to oversee an immediate rollback of import tariffs against Chinese goods. Nor is it likely to let up pressure on Huawei and other state-backed companies as the two superpowers battle for tech supremacy.

The South China Sea, Taiwan and human rights in Hong Kong and Xinjiang will all remain flashpoints. While strategic competition between the US and China will continue, the biggest change will likely be the tactics the White House deploys to manage China’s rise. We expect the Biden administration to adopt a multilateral approach and strengthen security cooperation with regional partners such as Japan, Australia and India.

Read Insight: APAC on the front line of Cold War 2.0

As an important counterbalance to a rising China, we expect India to remain one of the US’ most important strategic regional partners under a Biden administration. The recent signing of the China-backed Regional Comprehensive Economic Partnership (RCEP) – which India decided not to join – is likely to incentivise the two countries to bolster trade. While there is no indication of a revival of FTA talks, restoring India’s status under the Generalised System of Preferences (GSP), terminated under Trump, is a possible quick win for both countries. Climate change is another policy priority, and as reflected in a recent call between the president-elect and Prime Minister Modi, will likely play a role in any trade discussions.

Biden is also likely to differ from Trump is in his response to the deteriorating human rights situation in India. Having already criticised restrictions in Kashmir and the Citizenship Amendment Act (CAA), the new president is likely to use these issues as pressure points. An increasing likelihood of a resumption in CAA-linked civil unrest once the pandemic subsides is potentially the first upcoming test of Biden-Modi ties. As our Civil Unrest projections show, our baseline expectation is for extreme levels of unrest over the next two years (see figure below).

A Biden presidency promises to strengthen relations with Japan and South Korea. President Trump viewed diplomacy with Seoul and Tokyo as largely transactional, and his White House repeatedly threatened both countries with trade restrictions and requested more financial support for hosting US troops.

We expect multilateral cooperation on common challenges, including climate change, China’s rise and North Korea. Seoul and Tokyo’s recent commitment to carbon neutrality by 2050 is likely to go down well with the future president, who has made tackling climate change one of his top priorities. This focus will also add pressure on both countries – which have been slow to pursue decarbonisation – to take tangible steps towards their targets.

We also expect a Biden administration to take a more involved role in mediating in the trade dispute between its two allies, contrasting with Trump’s largely hands-off approach. We have accordingly revised our judgement-based forecast, and now expect a 22% probability of Seoul and Tokyo fully removing trade restrictions against each other by 30 June 2021 – up from the 14% forecast in September.

Australia to welcome return to multilateralism

Canberra has worked hard to increase cooperation with Japan and India over recent years and Biden’s desire to strengthen alliances will boost these efforts. The certainty of a more considered approach to strategy – not least in relation to China – will also be a plus, with Australia on the frontline of regional competition.

Climate change is one area where Biden’s win complicates matters in Canberra. Federal climate policy has been a graveyard of Australian prime ministers, and Trump’s exit leaves Australia as of one of the few remaining developed countries without an ambitious emission reduction target . Biden is unlikely to risk souring the bilateral relationship, but Prime Minister Scott Morrison can expect tough questions ahead of COP26 in November 2021.

Despite the change in outlook in Washington, we think it unlikely that the Australian government will adopt an ambitious climate policy ahead of the next general election in 2022, as the issue remains deeply contentious within the ruling Liberal-National Coalition government. Our latest judgement-based forecast accordingly designates a 46% probability that the Australian government will adopt a carbon neutrality target by the start of COP26.

The incoming administration will likely assign greater diplomatic importance to South-East Asia. The sub-region is a key battleground in the strategic tussle between Washington and Beijing, in which most states are doing their best to avoid picking a side (see map).

The Trump administration has lost ground to Beijing via its tendency not to show up for major ASEAN summits, failure to appoint key diplomatic personnel and tariff threats. An example of Trump’s ineffective diplomatic engagement was US Secretary of State Mike Pompeo’s recent trip to Indonesia, during which the Jokowi administration refused a request to host US spy planes. Meanwhile, Beijing was offering South-East Asia’s largest economy access to a COVID-19 vaccine and pledging to invest $20 billion USD in an integrated lithium battery production facility.

A Biden administration is unlikely to join either of the recently concluded regional trade deals – the Comprehensive and Progressive Agreement for Trans-Pacific Partnership (CPTTP) or the Regional Comprehensive Economic Partnership (RCEP) – due to domestic opposition. This lack of an economic string to the US bow will leave China as the trade and investment partner of choice for many South-East Asian states.

How are APAC states aligning amid increasing US-China rivalry? 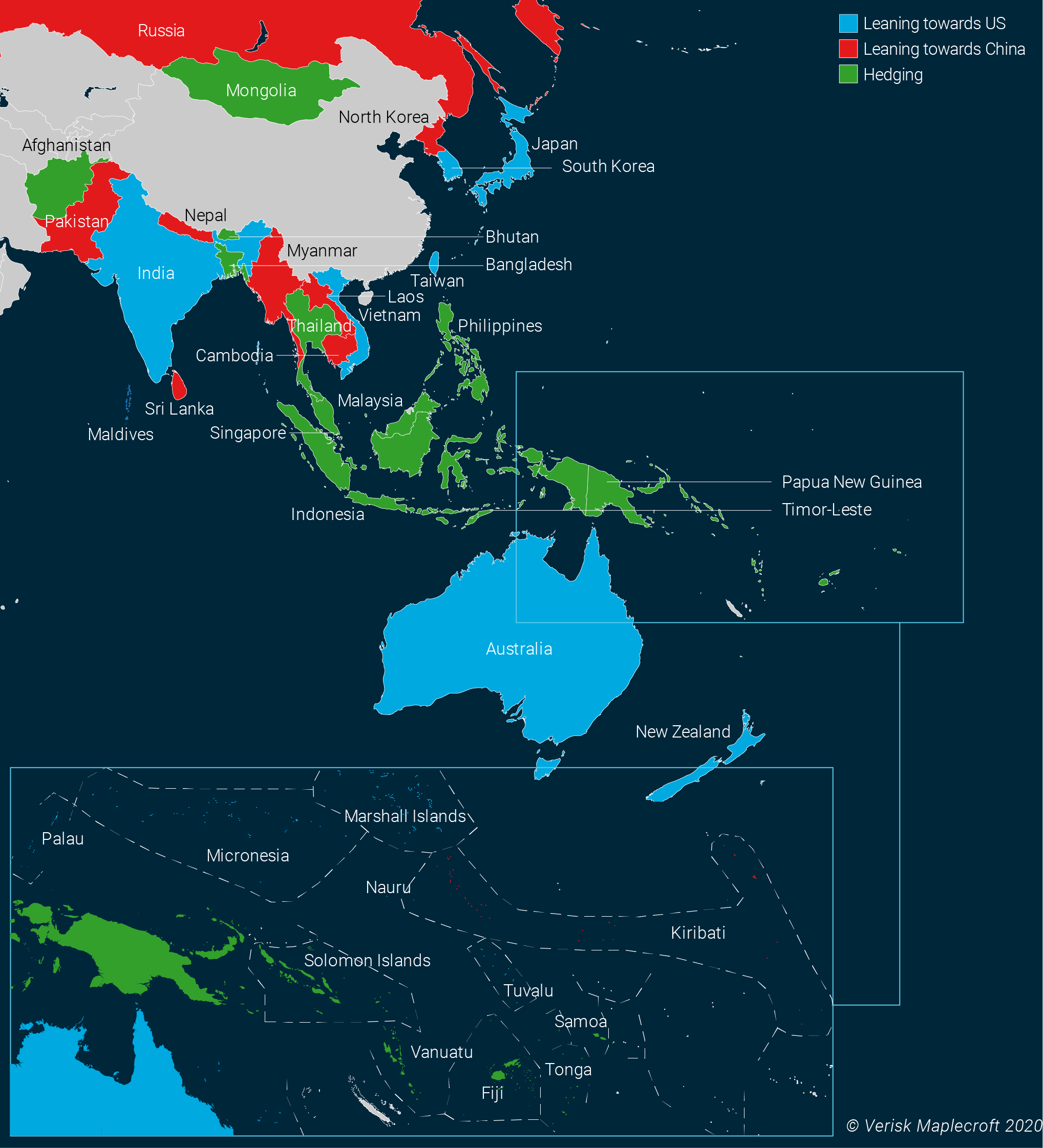 How are APAC states aligning amid increasing US-China rivalry?

Despite the promise of a partial reset of US policy toward Asia Pacific, Beijing and Washington are set to remain locked in a struggle for influence that is showing no sign of waning. The new president’s ability to balance between efforts to contain China vs working with Beijing on areas of mutual interest – such as climate change – promises to impact the entire region and set the pace for a geopolitical contest that is increasingly global in scope.