Public outcry over plastic pollution is driving investor interest in a circular economy.

Investors, legislators, and consumers are scrutinising corporate waste and packaging policies like never before, putting pressure on businesses to act or face the threat of fines, boycotts or even divestment.

Investors acting to limit exposure to plastic pollution by investing in circular economy solutions. The outcry only really started in 2015 with press pictures of pristine beaches caked in plastic. Then footage of dead and maimed sea creatures hit our screens which, along with growing alarm over microplastics in the food chain, fuelled the public backlash. Shareholder resolutions prompted global companies like Coca Cola, McDonald’s, and Starbucks to reduce plastic waste by ditching single-use plastics, putting pressure on their peers to follow suit. Today, regulators are sweeping up the laggards: our map shows the UK, EU, China and India are among more than 60 countries introducing national or regional legislation to limit plastic bags or other single use plastic materials. 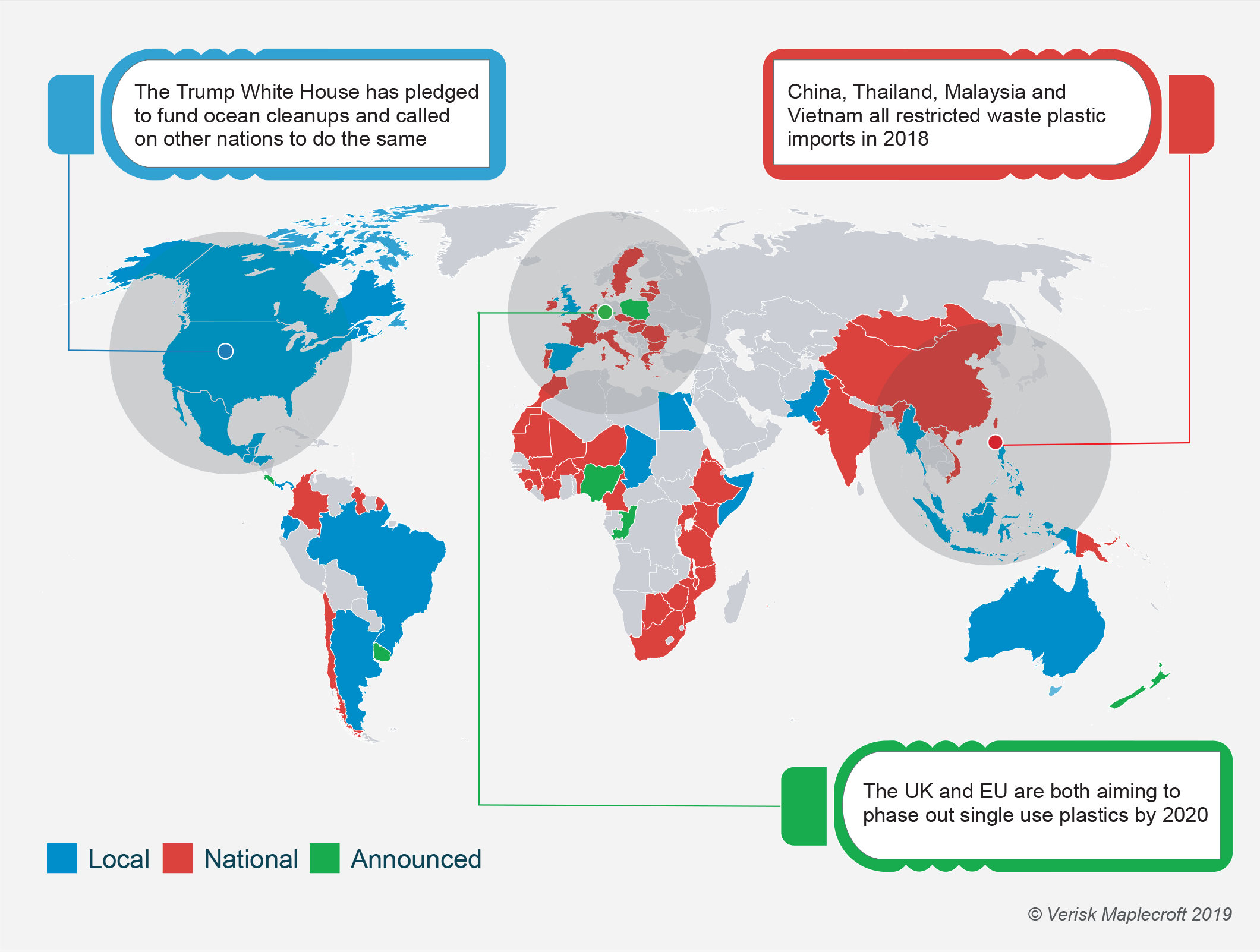 China and some of its neighbours have stopped accepting waste plastic imports; the spill over – estimated at more than 111 million tonnes by 2030 – will end up in countries that cannot deal with the influx, meaning responsible disposal cannot be guaranteed in western nations that relied on shipping their waste overseas. The 2018 G7’s ocean plastic charter and ongoing discussions at the UN Environment Assembly raise the prospect of a global treaty to address the issue, while at the start of this year an alliance of more than 25 major companies committed USD 1 billion to reduce plastic waste and improve recycling. Three years on from barely registering in popular consciousness, plastics and their consequences are now front and centre.

The risk to investors is significant: Norway’s USD1 trillion sovereign wealth fund has around USD25 billion invested in plastics producers alone. Seven of the world’s 10 largest plastic producers are oil and gas companies. The sector is accustomed to shareholder divestment campaigns relating to its contribution to climate change, but consumer concern around plastic pollution could start to add more fuel to those fires in 2019 – and give investors food for thought.

In 2019, it will be harder than ever for investors and corporates to overlook plastic pollution: a wave of shareholder resolutions and capital is poised to propel technological solutions and cross-sector partnerships into the mainstream. The investment opportunities in infrastructure needed to support a circular economy will be huge but, given the current lack of plastic alternatives, collaboration is the best way for industries to get smarter about the materials produced, how they are used, and what happens once they are thrown away.