The Trump presidency saw the EU move from a close American ally to an antagonist at times. In the event of a Biden victory in the upcoming US elections, transatlantic trade ties will likely improve as Biden is unlikely to deploy the same trade policy levers as the Trump administration, thereby reducing supply chain disruptions and trade volatility. This is a promising prospect for markets as the US and EU account for a third of global trade flows.

Figure 1: Will Donald Trump be re-elected as President on 3 November 2020?

Figure 1: Will Donald Trump be re-elected as President on 3 November 2020?

Under a Biden administration, Washington and Brussels would be likely to work more closely on thorny geopolitical issues like climate change and Iran’s nuclear programme. A key foreign policy focus will be China, where Trump’s unilateral strategy has failed to extract significant concessions from Beijing. A Biden administration seeking to mend frayed ties with the EU would be better placed to forge a united US-EU position on China that can more effectively put Beijing under pressure to make concessions. Beyond that, the EU’s ambition to be a geopolitical actor will, however, continue to suffer from internal divisions.

Under Trump, disagreements over industrial subsidies, defence spending, the role of NATO, and the Iranian nuclear programme have driven EU-US tensions. While we expect Biden to also advocate for increased EU defence spending and a reduction of the US bilateral agricultural trade deficit, his administration is expected to use less disruptive methods.

Trump has employed unilateral tariffs against European allies to achieve his trade policy goals. Such antagonist trade policy levers against EU states resulted in volatility and supply chain disruptions for the largest bilateral trade relationship in the world.

In contrast, with Biden expected to seek negotiations with European allies, his presidency would see less trade and supply chain disruption regarding US-EU relations. Markets’ favourable outlook at the prospect of a Biden presidency is reflected in the visuals below: European stock market volatility has decreased (following a spike in March amidst the pandemic crisis) and the USD/Euro forward rate has strengthened as Biden extended his polling lead over Trump across 2020. 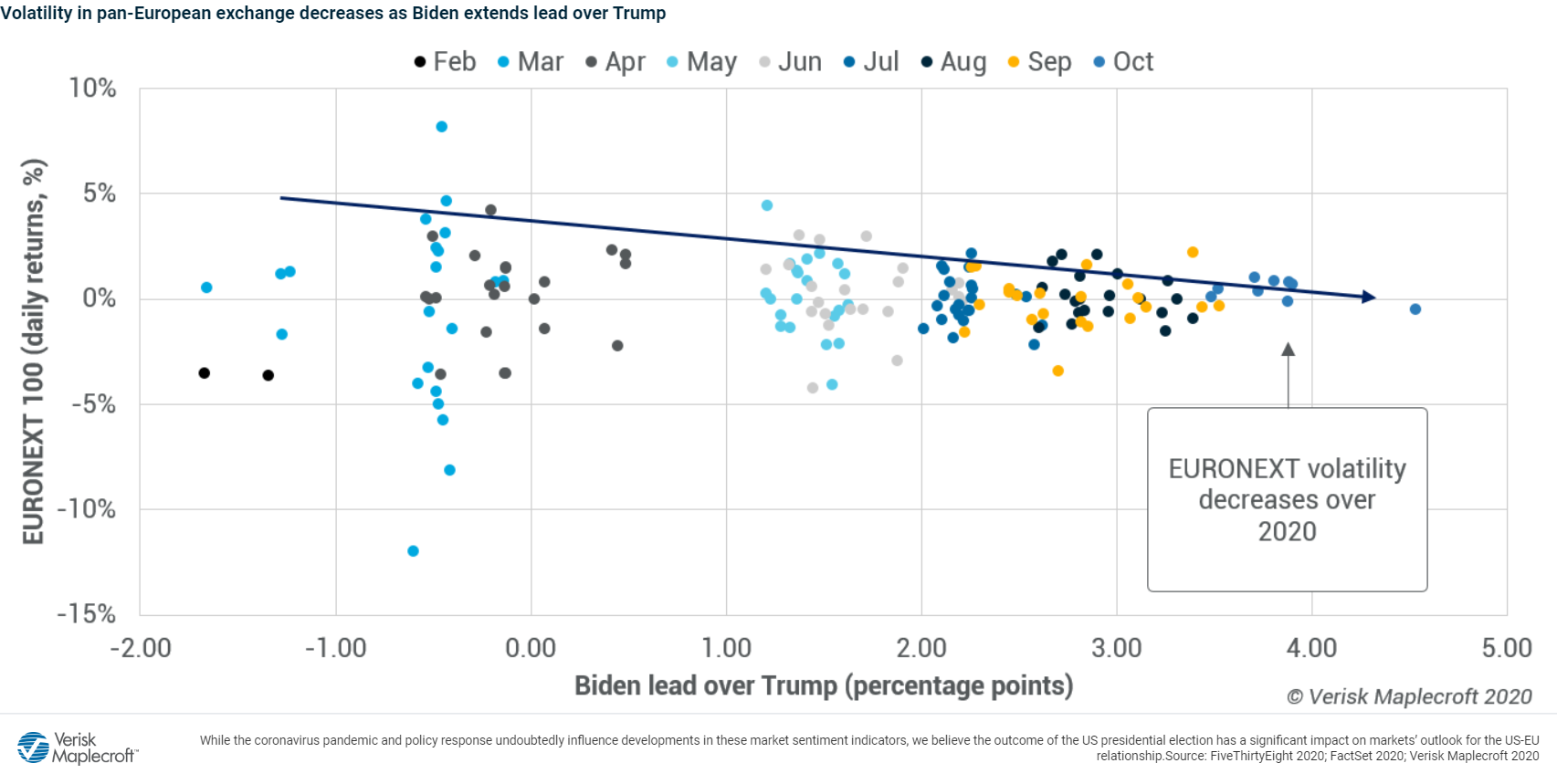 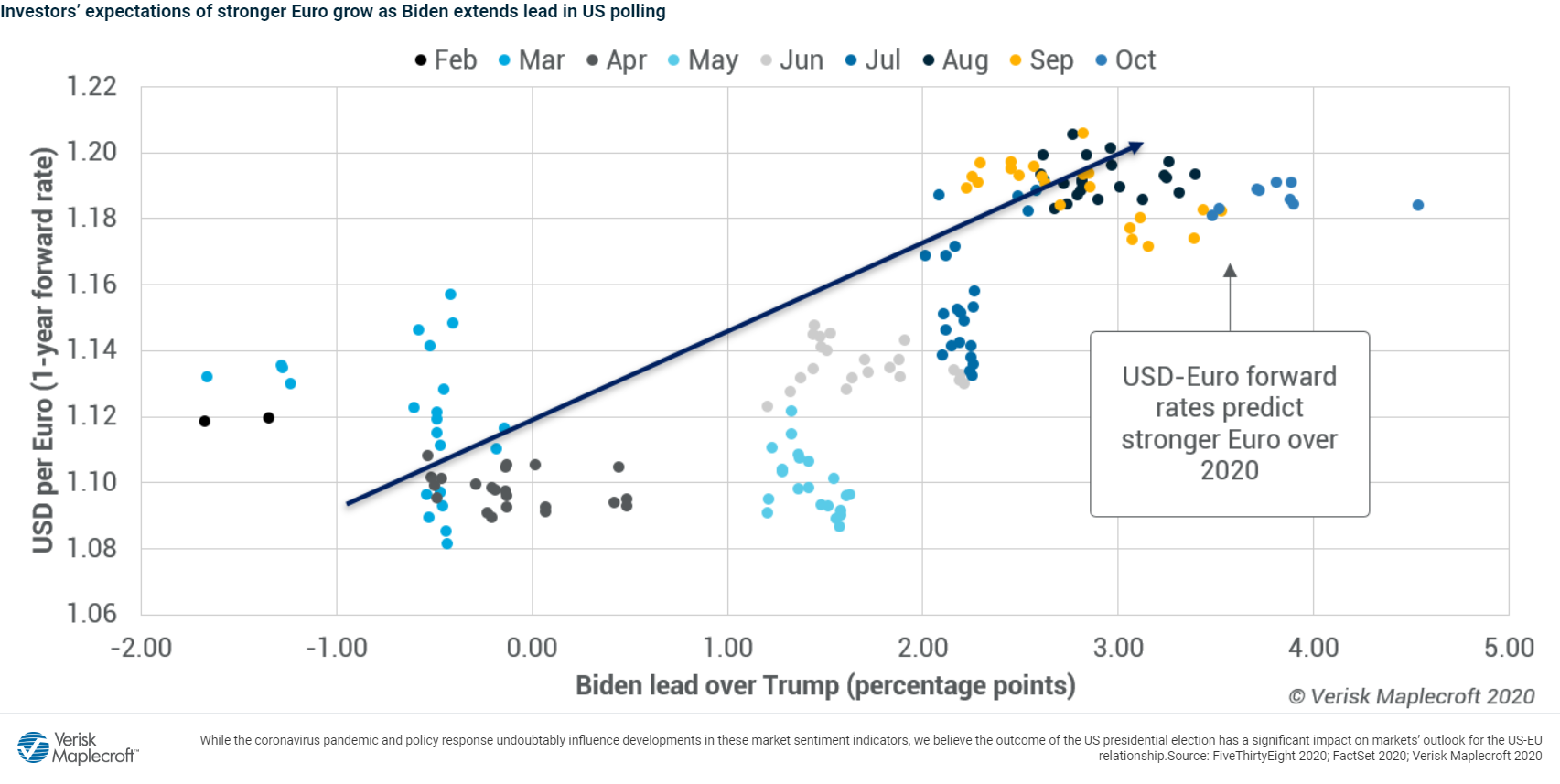 Trump’s non-traditional foreign policy provided the EU with added impetus to assume a more assertive role internationally, bolstered by the new EU Commission President’s plan for a “geopolitical EU”. However, this opportunity and appetite for a stronger European voice in international affairs has not been matched by results, as the EU has repeatedly failed to establish a united foreign policy on key issues. For example, the EU has lacked a united voice vis-à-vis Chinese human rights abuses in Xinjiang, Libya’s civil war, the Navalny poisoning and the bloc’s migration policy.

EU foreign and security policy ultimately lies with the EU member states, who need to unanimously approve most decisions within the European Council. The EU’s 27 member states have varying economic, political and cultural ties with non-EU states; they tend to prioritise national self-interest over the EU’s geopolitical clout, complicating efforts to find a common approach. A change in the US President will not fundamentally change that, meaning that the EU’s geopolitical ambitions will continue to suffer from internal divisions.

However, we would expect to see more collaboration between the EU and US under Biden on several important geopolitical issues, such as climate change, Iran and the pandemic.

A united US-EU strategy on China?

Key member states such as Germany, which have so far been wary of provoking a backlash from Beijing amid ongoing EU-US tensions, would likely feel emboldened to push for concessions from China under a Biden administration that placed greater value on transatlantic ties. At the same time, growing discontent in EU states over the failure of China’s BRI projects to yield significant economic benefits have already laid the groundwork for EU states to take a more assertive stance on China.

We assess that a concerted effort by a Biden-led US and EU to engage Beijing in trade talks would put China under unprecedented pressure to make concessions on issues such as investment reciprocity and respect for intellectual property rights. That said, some policy divisions are also likely to persist under a Biden presidency, such as Washington’s opposition to Huawei being allowed a role in 5G networks operated by US allies, as opposed to the EU’s more ambivalent approach of gradually reducing the bloc’s dependency on the Chinese telecoms company.

We see three areas where a Biden administration would lead to positive change in the transatlantic relationship.

Yet, a change in the White House will not change everything, and internal divisions between EU states will continue to hamper the bloc’s geopolitical ambitions.