In a little over three weeks, the US will settle its 2020 general election against the backdrop of COVID-19, a depressed macroeconomic landscape, and significant political upheaval. While many Americans will enter the polling booth on 3 November, millions will have already cast their ballots as mail-in voting has surged to record levels.

President Donald Trump’s re-election prospects are on thin ice. Our judgement-based forecast assigns him a 30% chance of victory (see Figure 1). Polls taken since the first presidential debate on 29 September, and Trump’s hospitalization from contracting COVID-19 in early October, show Democratic challenger Joe Biden widening his lead in national polls and in the battleground states that determine the Electoral College.

Our low probability forecast is driven by three main factors: Trump’s level of support, the macroeconomic outlook, and voter turnout projections. Each paint an increasingly bleak picture for the president. And although time is running out, Trump’s base of support remains firm and there is still scope for a major event to alter the trajectory of the race.

Figure 1. Will Donald Trump be re-elected as President on 3 November 2020?

Figure 1. Will Donald Trump be re-elected as President on 3 November 2020?

With approximately 7.5 million cases and 200,000 deaths from COVID-19, the US remains the hardest hit country in the world. Trump’s contraction of the virus in October - alongside several dozen White House staffers - has underscored a perception of an executive branch failing to effectively get a handle on the health crisis that has sharply upended the economy.

The Trump campaign had hoped to shift the focus of the race onto more favourable terrain. The opportunity to elevate a conservative justice to the Supreme Court following the death of Ruth Bader Ginsburg presented an opportunity to energize conservative voters. The campaign has in turn sought to tie Biden to interventionist regulatory policies, like the Green New Deal, to help close the gap.

But with a handful of weeks remaining, an average of polls compiled by the website FiveThirtyEight for battleground states shows Biden leading with varying margins (see Figure 2). Trump will need to carry most of these states to win the Electoral College, while former VP Biden has several pathways to victory. For example, if Biden were to win Wisconsin, Pennsylvania and Michigan, alongside the states carried by Hillary Clinton in 2016, he would be over the line to the White House. 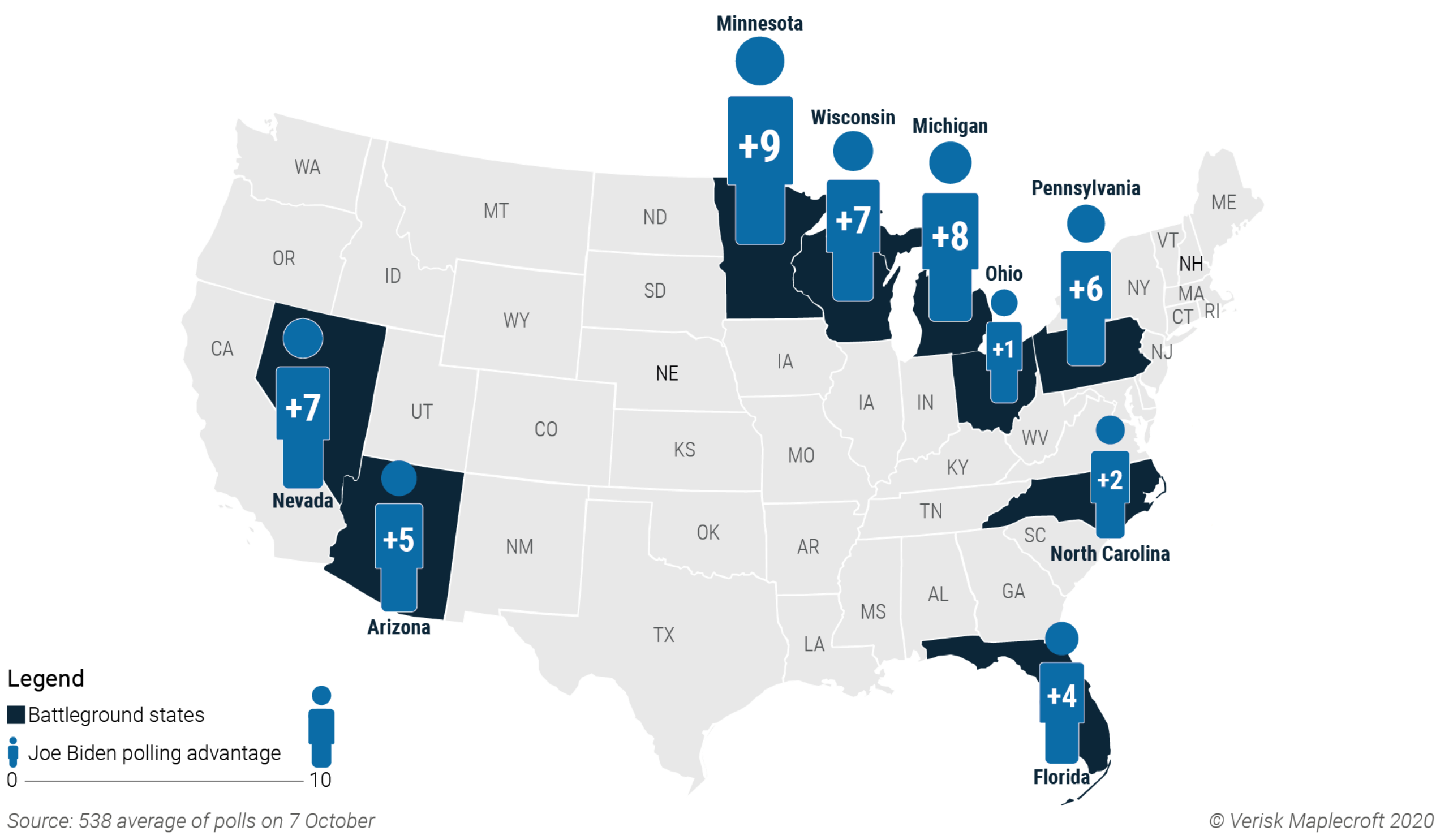 A weak macroeconomic landscape continues to weigh on the president’s chances. As the growth pillar of our Dynamic Macroeconomic Index shows, the US economy continued to underperform after a slight recovery in June 2020 (see Figure 3). After peaking in April at 14.7%, the unemployment rate stands at 7.9% (September), with monthly jobless claims remaining elevated. Consumer spending levels have declined as the USD2-trillion fiscal stimulus measures have begun to ease off.

The CARES (Coronavirus Aid, Relief, and Economic Security) Act - which provided USD600 a week in federally funded unemployment insurance to supplement state-level benefits for laid-off workers - expired at the end of July. A Census Bureau study found that approximately one third of Americans are having difficulties paying for basic expenses, including rent and utilities.

Prospects for another round of fiscal stimulus before the poll are low, as the parties remain far-apart on a host of issues. Democrats have called for a more expansive bill that includes transfers to state and local governments while Republicans are hesitant to commit significant new sums and favour a more targeted bill.

The COVID-19 pandemic has presented several challenges to voter turnout. While safety concerns will act as a deterrent for in-person voting, margins are likely to be made up by the sheer scale of votes being cast by mail. Early mail-in vote tallies appear to show a significant uptick from previous cycles, with records broken in numerous states that will be decisive in the Electoral College. Our forecast takes the current mobilisation of mail-in voting as a mitigating factor for a depressed turnout on Election Day. Higher turnout will benefit the former VP, given the track-record of Democratic victories in high-turnout elections. Trump’s 2016 vote share was less than what Mitt Romney garnered in a loss in 2012.

Nonetheless, spurred by the Trump campaign’s scrutiny of the legitimacy of mail-in ballots, we expect the vote-counting process to be delayed and riddled with judicial challenges. Hundreds of lawsuits have been filed and both parties have assembled ‘legal war rooms’ to contest results through the court system. In the event one candidate does not win by a landslide, we expect delays and threats to the legitimacy of the poll to raise the spectre of political instability in the immediate aftermath of the election.

Despite these significant headwinds, the president’s popularity amongst his base of supporters remains solid. His approval rating has never veered too significantly from the 40-44% that it has averaged throughout his presidency (see Figure 4). 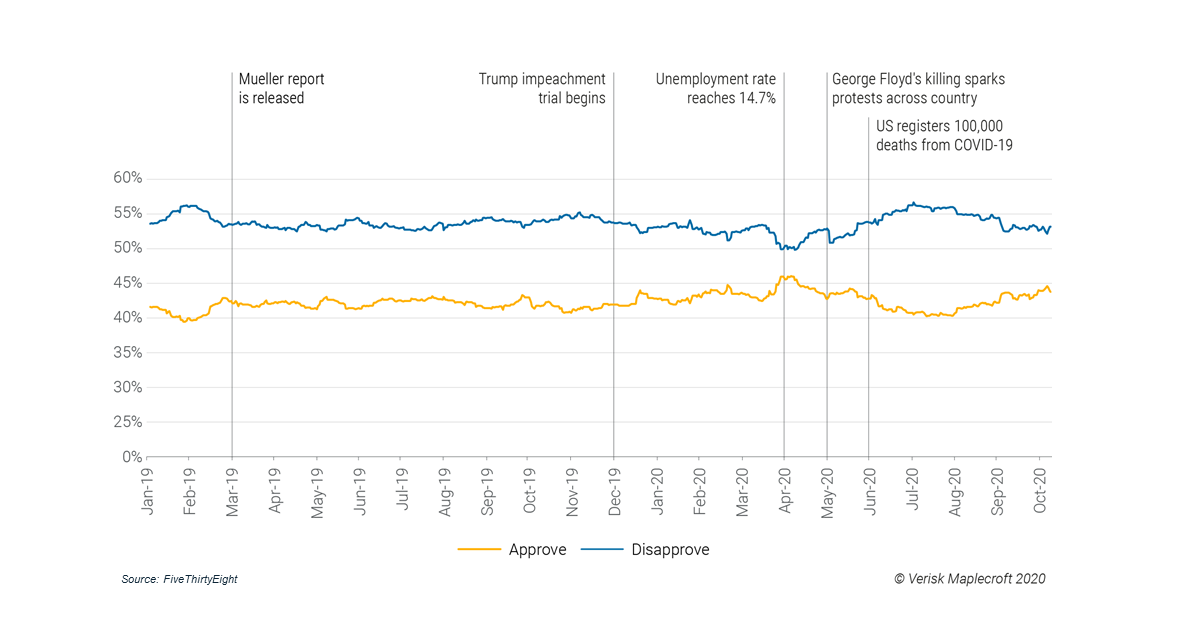 Trump’s rock-solid support from registered Republican voters has not wavered even amidst the significant events that have shook American life – such as the impeachment trial, widespread protests and civil unrest, the pandemic’s negative shock to the economy and escalating contagion in the run up to the ballot.

The sustained support, and the scope for another twist in an already eventful general election campaign, underpin Trump’s remaining chances to defy the odds.