Over the last two weeks, we have witnessed a corporate exodus from Russia in response to the Ukraine crisis. The global shunning of Russia echoes actions taken against apartheid South Africa throughout the 1980s, albeit at a far more accelerated pace, and with a unity in response rarely seen.

As institutional investors turn their backs on Russian assets and companies halt services and production in Russia, the impacts of divestment will be far-reaching – not just on companies and their workers, but crucially, future considerations on the importance of ESG.

Exits come at different costs; but reputational driver is clear

The pull-out from Russia is undeniably a clear signal of disapproval from the corporate world, but the material business implications vary. Increasing international sanctions and the unpredictability of the situation are clear drivers of the mass exit, particularly impacting those in the energy sector. For oil and gas majors, their announced departures could prove particularly costly as they offload stake and potentially leave billions in assets behind. However, the reputational cost of remaining is also undeniable. Dispelling any perceptions of directly causing or indirectly contributing to human rights or humanitarian law violations arising from the conflict in Ukraine has clearly become a black-and-white issue for companies that have left.

But even companies without such direct exposure, such as those in the retail and services sectors, are pulling out at breakneck speed. While there is no immediate legal need for many to do so, their exits reinforce a wider moral rejection of the conflict, and are in step with the current trajectory businesses are taking with respect to being better ESG performers. With observers – from consumers to governments – maintaining a critical eye on the corporate footprint in Russia, and with no immediate end in sight to the conflict, we expect more exits to be announced in the following weeks.

The global response to the Ukraine conflict reflects the prominence of ESG considerations of late, both at a state and corporate level, and the focus will only strengthen as the conflict highlights the stakes involved. From a recognition by the EU of the need to accelerate energy transition to reduce dependence on Russian oil and gas and the cutting off of Russia in the global financial system; these are measures that adopt an in intrinsically ESG-lens. At the corporate level, the conflict has forced companies and investors to put their money where their mouth is when it comes to ESG issues, and also approach risks from a non-financial, values-based perspective.

There is also much uncertainty of when, or if, companies that have left are able to resume operations in Russia. As discussions begin in Russia of the potential nationalising of assets of foreign firms that have exited, it becomes increasingly evident that companies ‘unfriendly’ to Russia are likely to face significant material consequences due to their decision to leave. The Ukraine conflict provides a wake-up call to investors and companies to recalibrate their assessments of the importance of human rights and good governance in their calculation of country risk.

The rapidly deteriorating civic space in Russia is only going to accelerate the momentum of companies leaving due to ESG concerns. The enactment of a law that criminalises what authorities deem to be false information on the Ukraine conflict further isolates Russia. The outright ban on free speech has seen a catastrophic collapse of an already severe rights environment, with journalists fleeing the country, the closure of independent Russian media outlets and the suspension of broadcasts from international news agencies.

For companies retaining a presence in Russia, the impacts are similarly far-reaching. Russia-based employees face heightened risks of imprisonment or arbitrary detention should they publicly voice out against the conflict – even on social media. Companies could also face the threat of closure if they are perceived to publicly challenge the Kremlin’s position on the conflict. As it stands, Russia is already the second-worst performer in Europe in our Freedom of Opinion and Expression Index, and the new law will only see its extreme-risk rating plunge further as restrictions on internal dissent escalates. Belarus is the only country to perform worse than Russia in the index, and is expected to see a similar deterioration, not just in free speech, but in other civil and political rights. 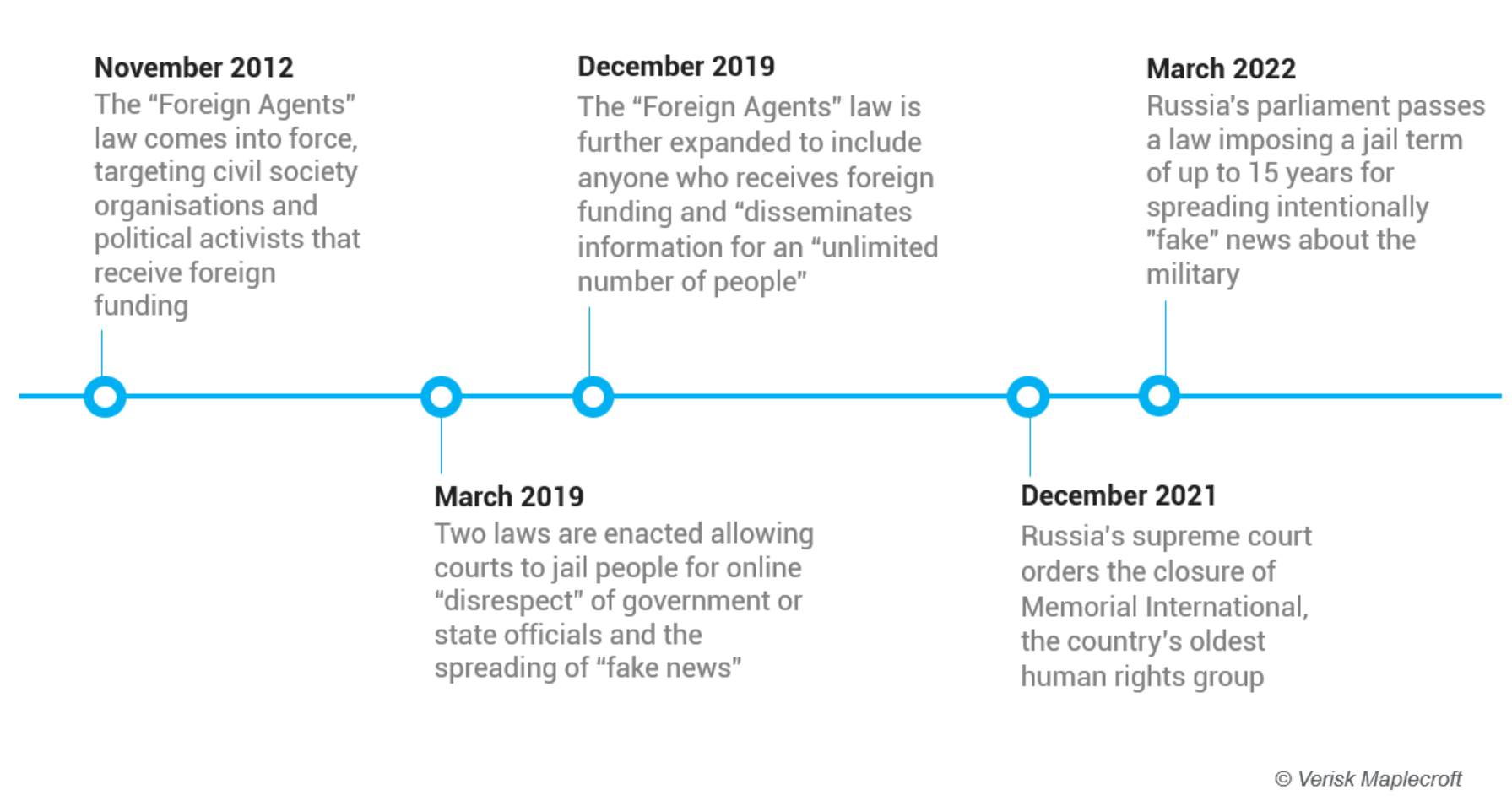 In the era of ESG underpinned by increasing mandatory reporting and due diligence, doing business in autocracies comes with an increasing price tag, whether that stems from reputational, legal, operational or geopolitical factors. Plenty of countries with weak democratic governance attract billions of dollars of international investment, but companies will increasingly require a large risk appetite. Mounting civil unrest and a spiralling humanitarian crisis in Myanmar saw a similar exit of energy majors and significant disruptions to the global garment supply chain. In China, US forced labour legislation targeting Uyghur forced labour, alongside international condemnation of human rights violations, threaten to uproot businesses from Xinjiang.

The Ukraine conflict does not fundamentally rewrite the business playbook, but it does strengthen the argument for adopting a greater ESG lens. International investment in autocratic countries – of which there are many – will likely be more closely scrutinised. Identifying red flags relating to human rights and governance risks sooner will be key to mitigating loss.