Trends to watch in 2022 - Climate and environment

by Will Nichols and Liz Hypes and Dr Rory Clisby and Charlotte Marcinko, 31 January 2022

COP26 may not have proved the decisive turning point in the battle against global heating it was billed as, but there is no question that awareness around climate risk – and broader environmental threats - is a key consideration for companies, investors, and governments today. Here, our analysts outline the topics coming to the fore in 2022.

Just like the rest of us, governments are prone to making new resolutions this time of year they don’t have any intention of keeping. But then we don’t have the force of the private, sector, investors, and the international community pressuring us to keep to our pledges. The US, EU, and China are among a host of nations with zero carbon targets (see map) and will look to hold each other accountable, while other countries may find trade and investment starts to intertwine with publishing tougher carbon goals ahead of this November’s COP27 in Egypt.

In the UK, home to one of the world’s most ambitious net zero strategies, the government is being sued for not pushing hard enough, part of a continuing global spread of climate litigation targeting governments. Shareholder revolts at companies not seen to be pulling their weight will proliferate and, while the Biden administration may struggle to introduce climate measures, the SEC is preparing the financial sector for greater climate risk oversight and disclosure this year.

So maybe not a sea change, but incremental shifts add up: by the end of 2022 Scope 3 emissions reporting, mandatory climate disclosures, and clean energy standards will be part of business as usual. 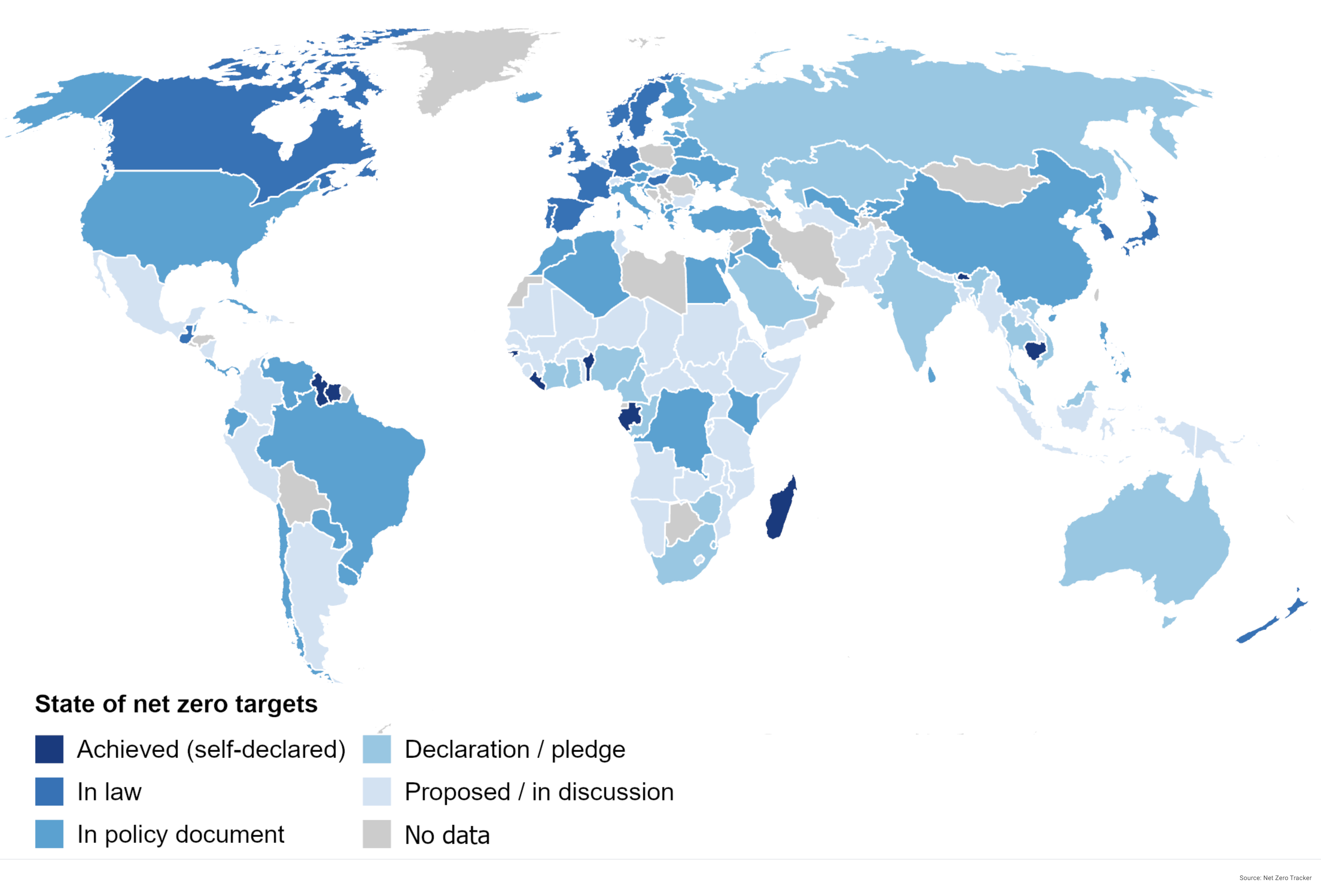 2022 looks to be another record-breaking year for green debt: forecasts indicate issuance will reach USD1 trillion over the year, of which a small but continually growing percentage will be from sovereign issuers. While we expect headlines will continue to herald the ‘greenium’ of European issuances in 2022, the area to watch is those from emerging and frontier markets like India, Greece and Uruguay, all earmarked for green or climate-related issuances this year.

COP 26’s rallying cry to accelerate climate finance will see green bonds become a bigger player in the sustainable development world, helping developing countries attract new investors and mobilise private funds for climate adaptation and beyond. We expect to see use of proceeds expand to include ‘just transition’ and natural capital alongside the rise of more direct engagement between investors and governments. But, with political stability projected to decrease across several current and potential issuers including Chile, India and Indonesia, understanding where corruption and political instability risks are high and what the KPIs are from the use of proceeds will help mitigate against greenwashing and ESG-related concerns.

Investors, regulators and consumers alike are becoming alarmed by the destruction of biodiversity and resilient ecosystems, which are vital for preserving societies and the markets in which businesses operate. With the imminent release of the beta version of the Task Force on Nature-related Financial Disclosures (TNFD) framework, alongside this year's 15th meeting of the Conference of the Parties (COP15) to the United Nations Convention on Biological Diversity (CBD), we expect 2022 to cement biodiversity’s place near the top of corporate and regulatory agendas.

Should COP15 finalise a Post-2020 Global biodiversity Framework and produce a Paris-style agreement for biodiversity, momentum will grow around regulations requiring corporate and financial institutions to recognise, assess and disclose their direct and indirect impacts on biodiversity and to mitigate nature-based risks.

Businesses will increasingly require access to accurate and granular geospatial data to assess the scale and loss of biodiversity and to understand location-specific issues associated with its degradation. Growth in demand for this information will see increased interpretation of existing data and drive the development of new biodiversity related metrics in 2022.

Pandemic-related supply chain issues and wider discussions around human rights and environmental due diligence have put trade in the sustainability spotlight. 2021 saw a slew of proposed carbon policies with direct implications for global trade, with the strongest example being the EU’s Carbon Border Adjustment Mechanism.

The EU is proactively using trade policy to tackle climate change, leveraging the Paris Agreement for future trade agreements, while mounting deforestation in Brazil could undermine the Mercusor pact. US-China dialogue is focused on climate action and Africa’s trade talks with the UK and Asia are likely to lean into the just transition.

Other efforts directly target supply chains like the UK’s Deforestation Law or the Agreement on Climate Change, Trade and Sustainability – an international trade agreement between New Zealand, Costa Rica, Fiji, Iceland and Norway focused entirely on climate change and sustainable development. UN bodies on shipping and aviation, WMO and ICAO, have been railroaded into tougher industry-wide emissions goals. With biodiversity entering climate discussions and forest loss accelerating, and the WTO signalling staunch support for a collective, coordinated response on climate change, the relationship between trade and climate change is clearly going one-way: low carbon.

With La Niña conditions set to continue into 2022 before a possible shift to neutral conditions between April and June, we can expect a repeat of the poor Northern Hemisphere harvests that contributed to a spike in food prices last year. But while the impact was reduced by very favorable southern hemisphere conditions, a mid-year shift could create a perfect storm of unfavorable weather conditions during the northern hemisphere key growing season, but without the bumper harvests in the southern hemisphere to cushion this effect later in 2022.

Yes, companies and investors are increasingly identifying and planning for physical climate risks by aligning with the recommendations of the Taskforce for Climate-related Financial Disclosures (TCFDs). But the lack of consideration for second order effects highlights a resilience gap likely to come under focus in 2022. 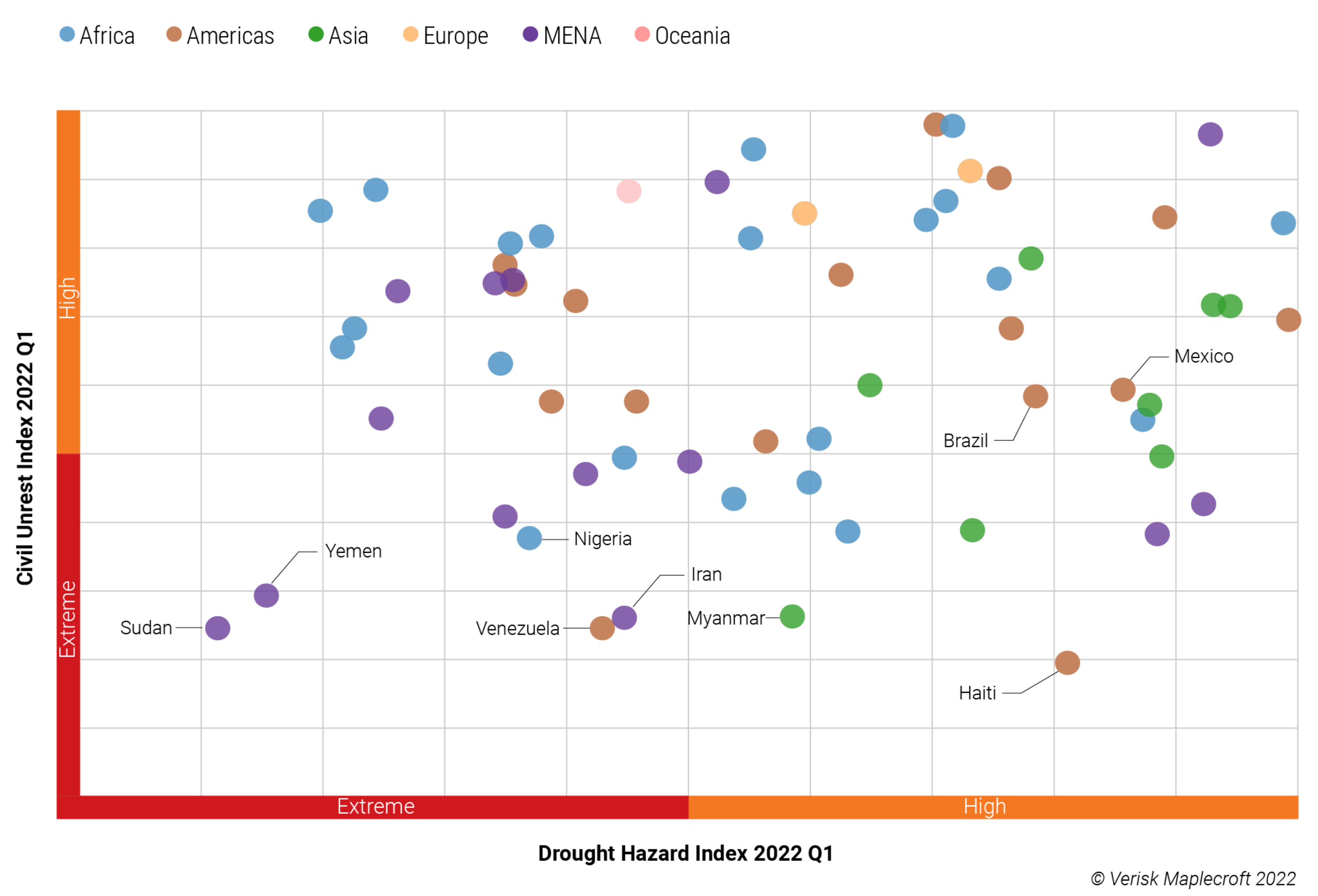