What was agreed, what wasn’t and why it matters

The conclusion of COP26 left as many questions as answers. Here are the key points for investors and corporates.

Keeping the Paris Agreement stretch goal in sight was a key element of making COP26 a success, and the fact that there is still a pathway to 1.5°C is a credit to the UK hosts. However, achieving this goal is going to require some sharp and inevitably disorderly policy shifts in the coming decade. Are businesses and investors prepared for the kind of abrupt change required? Well, even if the pledges made at COP are fulfilled, including a host of net zero commitments, the world is still looking at 2.4°C of warming. Another degree needs to be found by 2030 – meaning around 15.3 gigatonnes of GHG emissions savings, or a further 36% on top of COP26 pledges. Delegates and developing nations will hope this gap can be closed as countries submit strengthened plans ahead of next year’s COP27 in Egypt.

But, in reality achieving 1.5°C will require a wide-ranging rewiring of the global economy, impacting power, transport, agriculture and industry. Countries are already pointing to wording that would allow them to avoid updating plans due to “differing national circumstances”. Major emitters like India and China need to be on board with the process, not trying to dodge their responsibilities . And the agreement to “phase down” rather than “phase out” coal power – a last-minute wording change effected by China and India – suggests they are choosing the darker path.

An inconsistent pace of transition acts as a brake on the low carbon investments needed to get to 1.5C and increases the potential for ‘carbon leakage’ of heavy-duty industry from areas with stringent emissions mitigation policies to laxer jurisdictions. Displacing emissions is not the same as removing them. That said, this is the first time coal has been singled out in a COP text which, along with agreements on methane, deforestation and to halt public financing for “unabated” coal power abroad, do show a general direction of travel that will offer some succour to unsettled investors.

Equally, agreeing rules for global carbon trading raises the prospect of linked carbon pricing systems and – potentially – even a worldwide carbon price. Economists have long recognised the potential for carbon markets to drive investment and innovation that can in turn accelerate cuts to emissions. The agreement in Glasgow on Article 6 puts rules in place for bilateral deals that would be supervised by the UN, ensuring countries and companies play by the same rules and standards. Some estimates suggest this could be worth up to USD100bn. Right now, we have a hotch-potch of 66 carbon trading systems, covering less than a quarter of the world’s GHG emissions. The prices of allowances varies hugely, diluting the schemes’ effectiveness, while the potential for double-counting of credited emissions is extremely high.

The Glasgow pact purports to eliminate double-counting and will cancel around 2% of newly issued credits, which lowers the amount available for polluters and in theory helps to reduce emissions. The ‘but’ you hear coming though; some credits will be transferred from the old system, so any emissions savings are debatable, and the potential for fraud remains. Plus there are real questions about how effective oversight of double-counting can be. So, much like the rest of COP26, investors and corporates will see some positives in terms of standardisation, but will rightly remain suspicious that the bad practices of previous systems could infect the new setup.

Finally, what has been described as the ‘start of a breakthrough’ around mobilising cash to help poor countries deal with the impacts of climate change and lower their emissions. Famously, developed nations have made slow progress towards an annual USD100bn fund promised to their less well off counterparts. The lack of urgency has undermined trust throughout the COP process and the delays mean even more funding is required: escalating extreme weather has highlighted just how much the pace of emissions reductions must accelerate. In Glasgow, there was an acknowledgement of the toll on developing nations.

But the actual money…? Well, that will be dealt with in next year’s COP. With China and India railroading through a deal with the proviso on coal, developing nations had to drop claims for specific funding. Not only does that cement the trust issues bedevilling COPs, setting COP27 up for another row, but it creates threats to investments and operation in the countries and cities most threatened by climate change. Typically, climate change vulnerability is greatest in Africa but, as the graphic below shows, there are at-risk zones across all continents. Countries most at-risk will find it difficult to attract investment, while industries such as agriculture, construction, power, and mining will face threats ranging from extreme heat to water shortages and weather-related disruptions. 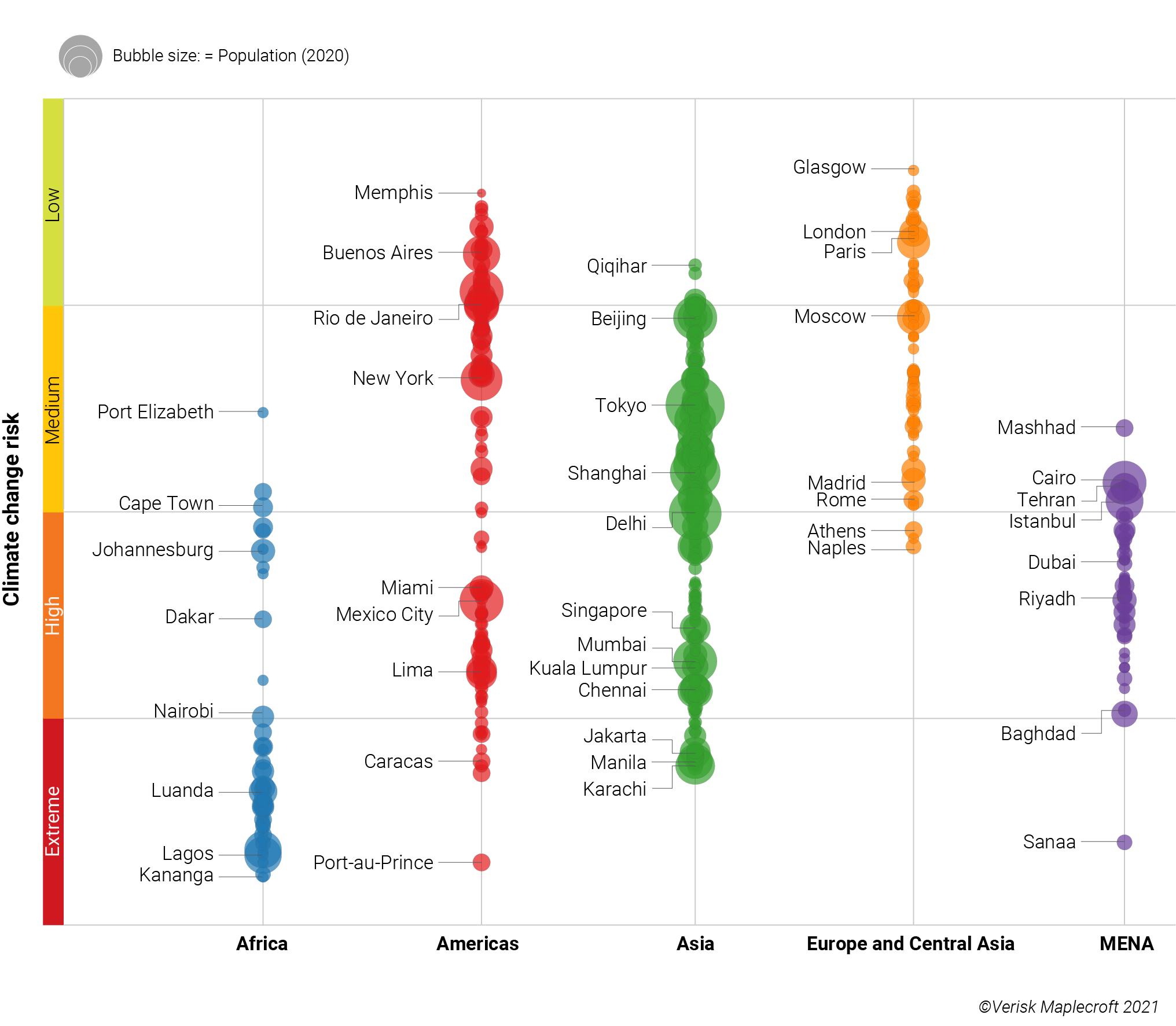 So overall, a mixed bag, with most countries acknowledging some progress, but conceding not enough has been made. However, the true mark of success will be if Glasgow encourages the private sector to continue to set more ambitious targets, follow through with supportive actions, and drive the progress that legislators are struggling to make.