The rise of populist governments across the globe is threatening progressive environmental regulations. This is happening under leaders ranging from Donald Trump to Jair Bolsonaro in Brazil and Narendra Modi in India. A consistent theme between these leaders is a desire for a smaller state and lighter-touch regulation, including where the environment is concerned.

Lighter regulation may at first seem to be a benefit to businesses. However, a robust regulatory framework ensures a transparent and stable investment environment. A rollback of environmental laws can lead to missed emission targets, rushed environmental impact assessments, and an uptick in pollution and environmental damage.

Businesses are all too aware that the public will be much quicker to blame failures on them than on politicians. An absence of national regulation opens the door for civil legal actions and public interest litigations against businesses associated with environmental damage.

Environmental regulations are getting weaker in key jurisdictions, despite a global trend for tighter laws. Our Environmental Regulatory Framework Index shows improving scores for most countries over the last four years. As show in Figure 1 below, both the US and Australia have fallen from a low risk to a medium risk score in this period as political leaderships have changed. If the UK also reels back on environmental standards in the wake of Brexit it will be in danger of losing its low risk categorisation. 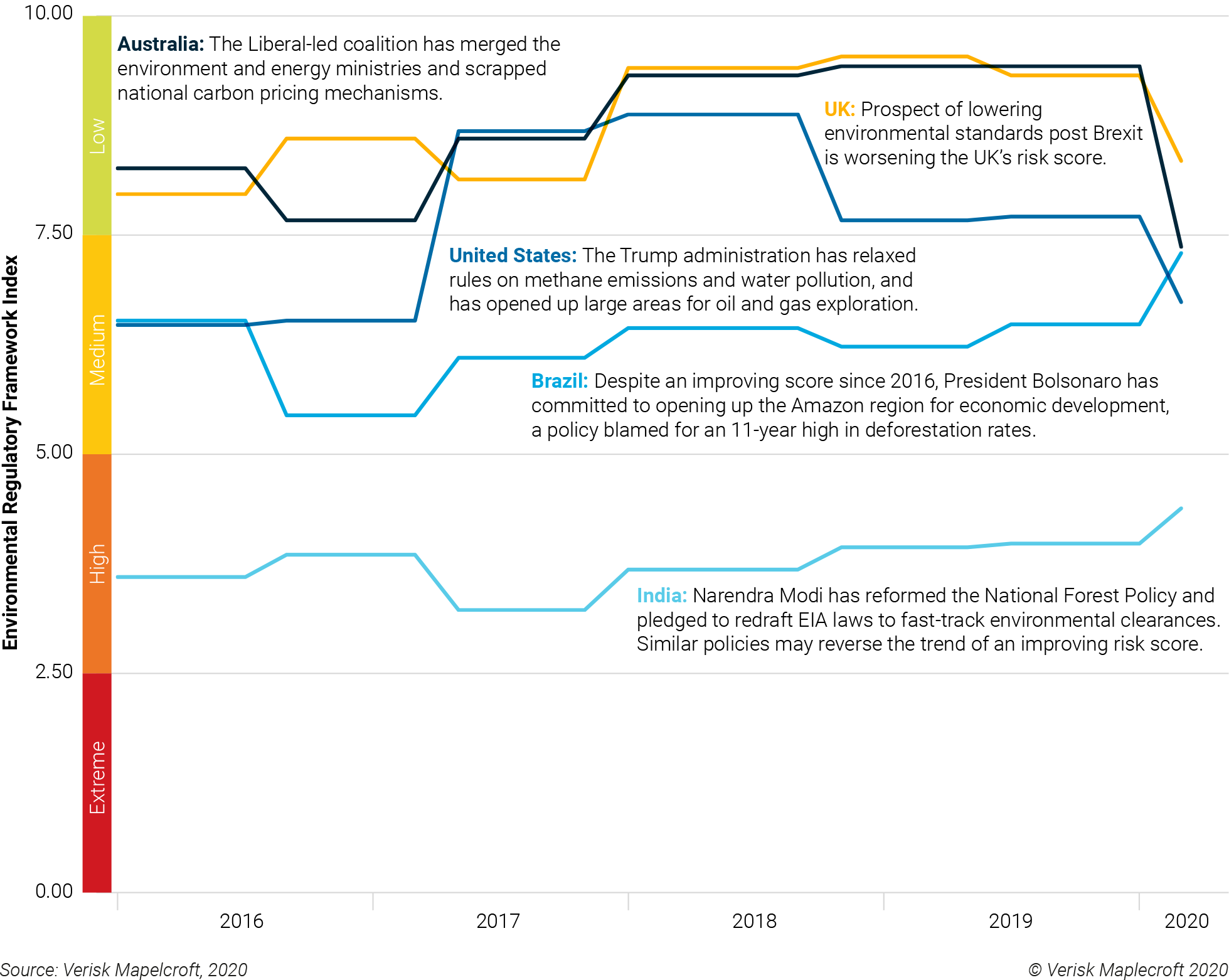 The USA’s score in the index will worsen when it formally withdraws from the Paris Agreement in November 2020 and is likely to deteriorate further if Trump is re-elected president in the same month as this would herald in another four years of environmental rollbacks. In the event of his successful re-election, Trump would still be president in 2024, when we will be halfway through the Paris Agreement compliance period. This would make it impossible for the US to meet the targets the Obama administration agreed in 2015; it could encourage other large-emitting countries, such as Brazil, to also leave the agreement.

On the other hand, several US states have committed to honouring the Paris Agreement targets despite the nation’s pending withdrawal. So, the already complex regulatory context in the US is likely to become even more complicated, and further divergence between federal and state regulation will raise compliance costs of businesses operating nationwide.

Elsewhere, Australian premier Scott Morrison has promised an “overhaul” of federal environmental regulations and a pro-business stance to environmental approvals for major projects, while Jair Bolsonaro has called for fines for environmental crimes to be abolished to promote economic growth.

Boris Johnson’s landslide victory in the UK’s general election gives him a free hand in determining the type of future relationship the UK will have with its EU trading partners. How closely the country will track EU environmental standards is yet to be determined, but ministers have made clear that they would not be seeking a ‘level playing field’ or complete alignment.

The dilution of environmental regulations, previously shaped by the EU, will be high on the demands of Johnson’s backers both inside and outside the Conservative party. Weaker environmental standards within the UK will introduce complexities for those importing into, and exporting out of, the EU due to differing requirements.

In jurisdictions where regulation is slackening, international operators will be looking to improve self-regulation and internal auditing to avoid any reputational blowback from damaging the environment. Pressures to maintain strong standards also come from shareholders, among whom expectations for strong corporate environmental performance will continue to grow for the world’s leading companies.

Several options are available for those wishing to raise environmental performance. These include industry-focused schemes such as the Task Force on Climate-related Disclosures (TCFDs). Operators can also assess their international supply chains to identify areas of high environmental risks due to poor regulatory regimes.

Heat stress to threaten over 70% of global agriculture by 2045