Saudi Arabia faces the tricky task of convincing Russia to sustain oil production cuts, while also averting a fallout with the United States as it seeks to boost oil prices in 2019. Riyadh needs the price of Brent to rise to at least USD80 per barrel to balance its budget this year – a reality which helps explain our December forecast on reductions to Saudi Arabian production. With the two countries making up almost a quarter of global oil supply, the Saudis will be looking to Russia to pull its weight and jointly spearhead production cuts. Our base case however is that their respective policies on oil production will increasingly diverge over the course of the year.

The December 2018 agreement by OPEC+ to slash output by 1.2 million barrels per day (bpd) until mid-2019 did help international Brent recover to around USD60 per barrel in January. However, this is unlikely to last the course of the next 12 months – unless we see a big oil glut, which could force Russia’s hand to cut production. 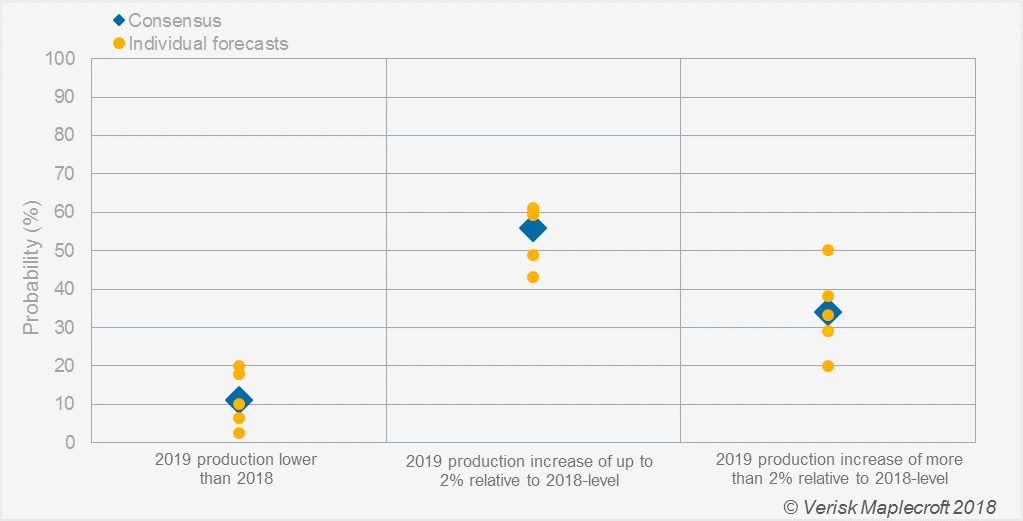 Russia has less incentive to play ball with Saudi Arabia

Moscow only needs crude to stay above USD50 per barrel to balance its budget and so the Kremlin has its sights set on maximising oil production over stabilising the international oil market, contrary to Riyadh’s ambitions. Our consensus forecast shows that the probability of Russia expanding oil production beyond levels registered in 2018 is far greater than the probability of cuts to production relative to last year, as shown in Figure 1. President Putin is prioritising containment of inflationary pressures derived from higher oil prices at a time of stagnant wages and increased public discontent.

The growing divergence between Russia and Saudi Arabia will also be driven by Moscow’s desire to fully exploit a Chinese market containing almost 1.4 billion consumers. The Kremlin is additionally trying to increase leverage over Beijing by boosting exports of its sweetest and lightest crude east.

In view of the above, Russia’s relative willingness to accommodate Saudi Arabia in December should not be over-stated. Although Russia played a pivotal role in securing an OPEC+ agreement, Moscow only agreed to cut production by between 50,000 to 60,000 barrels a day (bpd) in January, working up to cuts of 228,000 bpd by the end of the first quarter. More significant is the fact that Moscow only agreed to cut production after boosting output to a record high of 11.41 million bpd in October, meaning that its overall production in 2019 is likely to be greater than in 2018, as indicated by our forecast.

Russian policy on crude production is not guaranteed to diverge from Saudi Arabia over the course of 2019. A serious trough in growth and demand in China and a reversal to the détente in the trade war between US and Russia would put downward pressure on crude prices, and, in turn, encourage Moscow to agree to new production cuts. This dynamic would be compounded by the continuously robust production of shale in the US.

Fear of US retaliation will discourage overly aggressive production cuts

Even if Russia were to support sustained cuts in 2019, Saudi Arabia must still contend with pressure from Washington not to cut crude production too aggressively in order to avoid price hikes. While the US mid-terms are out of the way and US presidential elections are almost two years down the road, Trump needs all the domestic fire-power he can get as his political traction erodes in Washington.

The US administration would not consider withdrawing security guarantees or cut back on US arms sales to such an important strategic ally simply over OPEC+ production cuts. But the killing of Saudi journalist and activist Jamal Kashoggi in Istanbul back in October has strained bilateral relations, as reflected in Figure 2. The US Senate passed a resolution in December 2018 laying the blame for his death on Crown Prince Mohammed Bin Salman (MBS). The Democrat-controlled House of Representatives is expected to oversee hearings and introduce its own legislative action in response, keeping the issue a major irritant in the bilateral relationship through 2019.

One of Riyadh’s biggest concerns in 2019 is whether cuts to oil production will embolden US Congress and the White House to act not just against Saudi Arabia but also against other OPEC members. Momentum behind the adoption of ‘NOPEC’ (the No Oil Producing and Exporting Cartels Act) will gather force in 2019, especially if OPEC+ make production cuts which increase the price of crude.

The US would be in a position to sue OPEC members for market manipulation and collusion if NOPEC is passed, and Trump - who has yet to decide whether to endorse the act - decides not to block the legislation.

No silver bullet for Saudi Arabia’s oil and security conundrum

This is not to say that Saudi Arabia is being held over a barrel by the United States. Riyadh was angered by the way Washington granted Iran sanction waivers to eight countries without consultation or warning. The decision has allowed 1 million bpd of Iranian crude to flow onto the market until May, causing Riyadh to push for OPEC+ production cuts in December. As in 2018, Riyadh will seek to defend its market share and prop up the price of crude.

While Riyadh wants to use its growing relationship with Moscow as leverage against Washington, the USA will remain an important strategic ally in commerce, trade, security and defence. Trump’s hawkish approach to Iran has to a certain extent been undermined by his declared intent to withdraw an estimated 2,000 US forces from north-eastern Syria, but Riyadh still needs Washington to contain its biggest rival through sanctions or otherwise. Although Trump is an unreliable partner for the Saudis, Riyadh knows that the Russians are far from a perfect substitute.

Number of negative diplomatic exchanges between KSA and USA

Number of negative diplomatic exchanges between KSA and USA