During 2022, oil and gas producers across the Middle East and North Africa have come under pressure to raise output to counter high oil prices. So far, the region’s main oil producers have rebuffed appeals from the US and Europe to boost production.

Saudi Arabia has gone a step further by seeking to shift the focus to the risk of supply disruptions. Saudi warnings that the world faces a serious oil supply threat if the kingdom does not receive greater military support are undoubtedly coloured by ongoing tensions with the US. But it is also clear that the growing risk of disruptions to the supply of oil from the region is going under the radar at a time when the oil market is highly vulnerable to additional shocks.

Riyadh’s warnings against the risk of supply disruptions are not hyperbole. Not only is Saudi Arabia the world’s largest oil exporter, but the kingdom also faces weekly rocket, missile and drone attacks. Data from our Terrorism Intensity Index show that the majority of the attacks take place along the Saudi-Yemeni border. But as the map below shows, Saudi energy infrastructure is also in the firing line.

The attacks against Abqaiq and Khurais in September 2019 underscore the severity of the threat to energy infrastructure in the kingdom. The coordinated drone and missile attacks damaged the world’s largest oil processing plant, temporarily cut production by more than 4 million bpd, and led to a 20% spike in brent crude prices.

Despite efforts to strengthen missile defences, the missile and drone threat facing Saudi Arabia since then has only worsened. Not only has Iran expanded and improved its missile and drone capabilities, but Iran-backed groups throughout the region have also strengthened in parallel.

Coordinated attacks against Saudi energy infrastructure on 20 March 2022 did far less damage than in 2019. But with the war in Yemen unresolved, and nuclear talks with Iran still in the balance, the risk of another damaging attack persists. Oil market watchers will look closely for signs of an increase in the pace of production from Saudi Arabia over the coming months. But attacks against pipelines, oil fields, refineries and storage facilities over the last three years are a reminder of the very real threat to the steady supply of oil from Saudi Arabia. 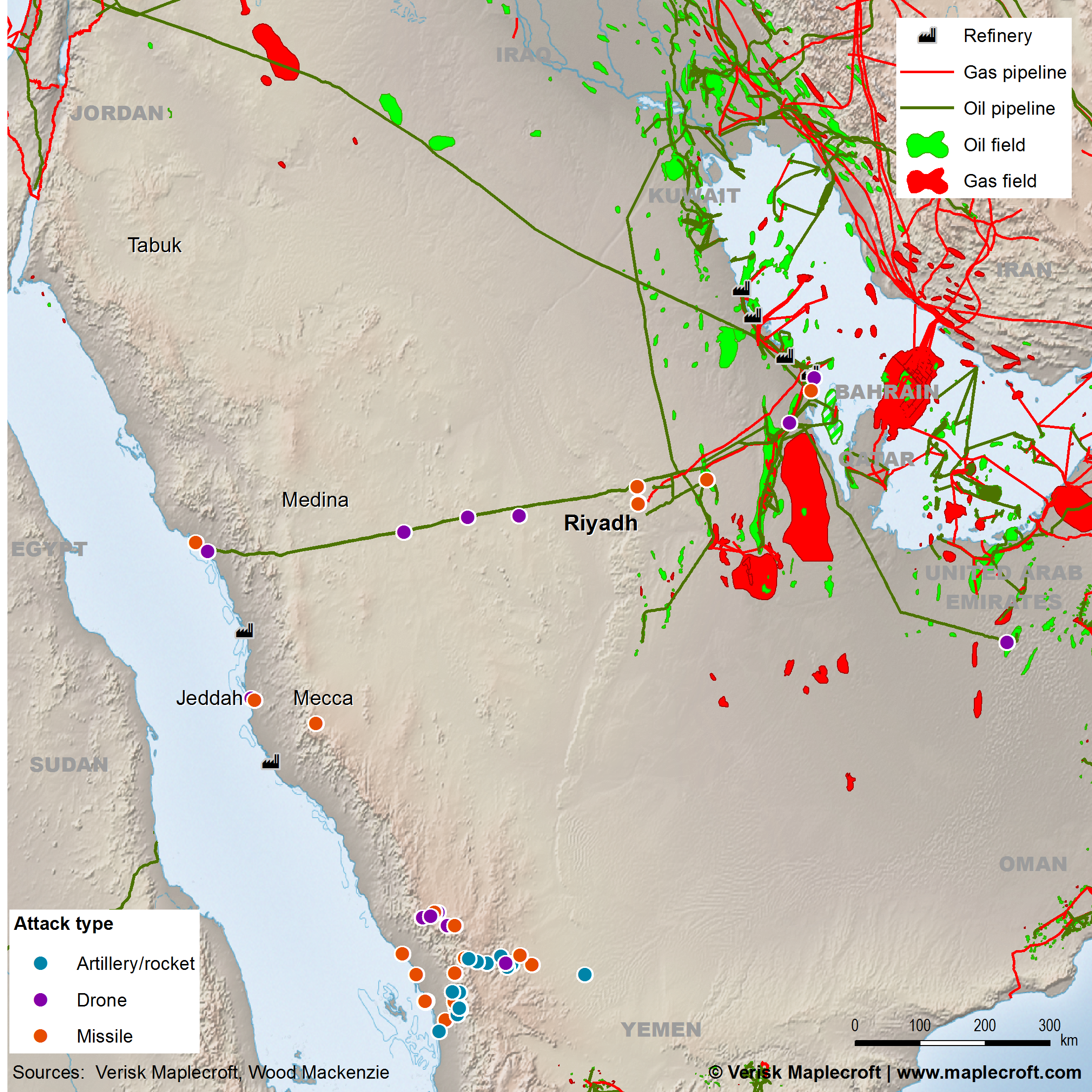 The threat facing the UAE is similar to the one faced by Saudi Arabia, with Abu Dhabi facing an increased risk of drone and missile attacks from both Yemen and Iraq. Although the aggregate number of attacks are lower than in Saudi Arabia, the threat level has risen markedly during 2022 as a result of the UAE’s increased indirect involvement in Yemen since late 2021.

The relatively low number of casualties as a result of missile and drone attacks means that the UAE is still placed in the low risk category in our Terrorism Intensity Index. The fall from 10.00/10.00 in 2022-Q1 to 8.66 in 2022-Q2 is nonetheless the 8th biggest drop globally, underscoring the negative shift in the threat level.

To counter the threat posed by drone and missile attacks, Abu Dhabi is expected to complete an underground oil storage facility built into the mountains around Fujairah this year, with a capacity of 42 million barrels of oil. Increased contingency and resilience will be a welcome development. But as long as regional tensions remain elevated, the UAE’s energy infrastructure will remain a target for Iran-backed groups in Yemen and Iraq.

Iraq stands out as another potential supply risk due to a combination of political and economic factors. Heightened political instability as government formation talks drag on has increased the risk of more serious civil unrest. In parallel, high levels of corruption and longstanding underfunding of critical export infrastructure raise the risk of disruptions as a result of damage to pipelines and other mid- and downstream infrastructure.

Increased legal uncertainty over the Kurdistan Regional Government’s independent oil sector after a surprise Supreme Court ruling in February 2022 has also increased the risk of disruptions to the around 400,000 bpd of oil currently exported by Erbil.

Iran is another less obvious oil supply disruption risk as previous rounds of country-wide protests have posed only a limited threat to oil exports despite Iran’s extreme risk category rating in our Civil Unrest Index.

Protests in 2019 and 2021 nonetheless serve as a warning for the authorities that this could change. Notably, the harshest security crackdown took place in the oil-rich Khuzestan province, especially in response to efforts by protestors to block access to a vital petrochemical complex in Mahshahr and the adjacent oil and petrochemicals export hub.

Strikes and walkouts in the oil sector are a related risk as highlighted by sporadic industrial action across large sections of Iran’s energy sector. Despite US sanctions targeting Iranian oil exports, Iran is still shipping more than 1 million bpd, mostly to China.

In North Africa, Libya remains the key disruption risk for oil and gas production. El Sharara, the country’s largest field with around 300,000 bpd of output, was shut in for three days during March 2022 after an armed group closed a pipeline valve – by our count the 23rd time the field has been shut since 2011.

Small-scale and generally short-term shutdowns can have a marginal impact on global energy prices and create complications for European importers. A more significant market-moving disruption, however, is possible if the Libyan National Army (LNA), a major militia grouping which controls most of Libya’s oil and gas facilities, decides to impose an oil blockade. A previous eight-month long blockade imposed by the LNA in 2020 took 90% of Libya’s usual output of 1.2 million bpd offline.

The risk of another full blockade is currently remote, as the LNA is on the side-lines of the latest political dispute in Libya, where two rival prime ministers are vying for control of the capital Tripoli. Should one of these rival prime ministers attempt to restrict payments flowing to the LNA, however, a further blockade that removes up to 800,000 bpd from the market would be on the cards.

What is the outlook?

The MENA region’s energy security outlook over the coming weeks and months will first and foremost be determined by the outcome of nuclear negotiations between the US and Iran.

An agreement would bring down the risk of disruptions from Saudi Arabia and the UAE. In contrast, a collapse in talks would likely spark an increase in attacks against shipping and energy infrastructure in and around the Persian Gulf.

Oil producers across the region are racing to improve the resilience and security of their oil export infrastructure to mitigate high levels of geopolitical uncertainty and volatility. This will bring greater contingency in the event of disruptions over the coming years. But in the meantime, the risk of disruptions is increasing. Any unexpected supply disruptions that aren’t already priced in will add to the pressure on an already jittery global oil market.