The Biden administration’s decision to downgrade relations with Crown Prince Mohammad bin Salman (MBS) at the start of its term has made efforts to bring down oil prices now more difficult. When the administration announced its ‘recalibration’ in February 2021, brent crude stood at USD40 per barrel. Just over a year later it reached more than three times that level.

The Biden administration has dismissed reports that it is preparing a trip to Saudi Arabia with the aim of in uencing Saudi oil policy. There is little doubt, however, that efforts to mend broken ties will intensify ahead of midterm elections in November.

Saudi Arabia is showing little interest in the Biden administration’s outreach so far. The ball is now in Riyadh’s court as it weighs up the advantages and disadvantages of giving in to US pressure to raise oil production further.

Ties have weakened at the executive level

One of the biggest obstacles to closer US-Saudi oil market coordination is the lack of close ties at the executive level between the Biden administration and the Saudi political leadership under the de-facto rule of MBS. The chart below shows that bilateral relations have been less turbulent under Biden, but at the same time, ties at the executive level have grown weaker.

Steps taken by both sides have contributed to this deterioration. On the Saudi side, scepticism of the Biden administration has been high from the outset due to the president’s previous role in the Obama administration. The Obama presidency proved highly unpopular in Riyadh, mainly due to its decision to seek a nuclear agreement with Iran without consulting Riyadh.

Scrutiny of the US-Saudi relationship has intensified among both Democrats and Republicans. But there is little doubt that Saudi Arabia feels more exposed to US pressure and action over contentious issues such as the war in Yemen and the Khashoggi case with a president from the Democratic Party.

This owes a lot to the current Saudi leadership’s failure to cultivate broad bipartisan ties in Washington, instead prioritising relations with the Trump administration. Riyadh is also acutely aware that Democrats have been more vocal in their criticism of MBS.

On the US side, the decision by Biden to not deal directly with MBS in February 2021 has only reinforced Saudi fears. It has also left the Biden administration at a diplomatic disadvantage as it now seeks a shift in Saudi oil policy. King Salman is the head of state and nominally holds the levers of power. But it is MBS who exercises direct control over the kingdom’s most important portfolios and institutions. 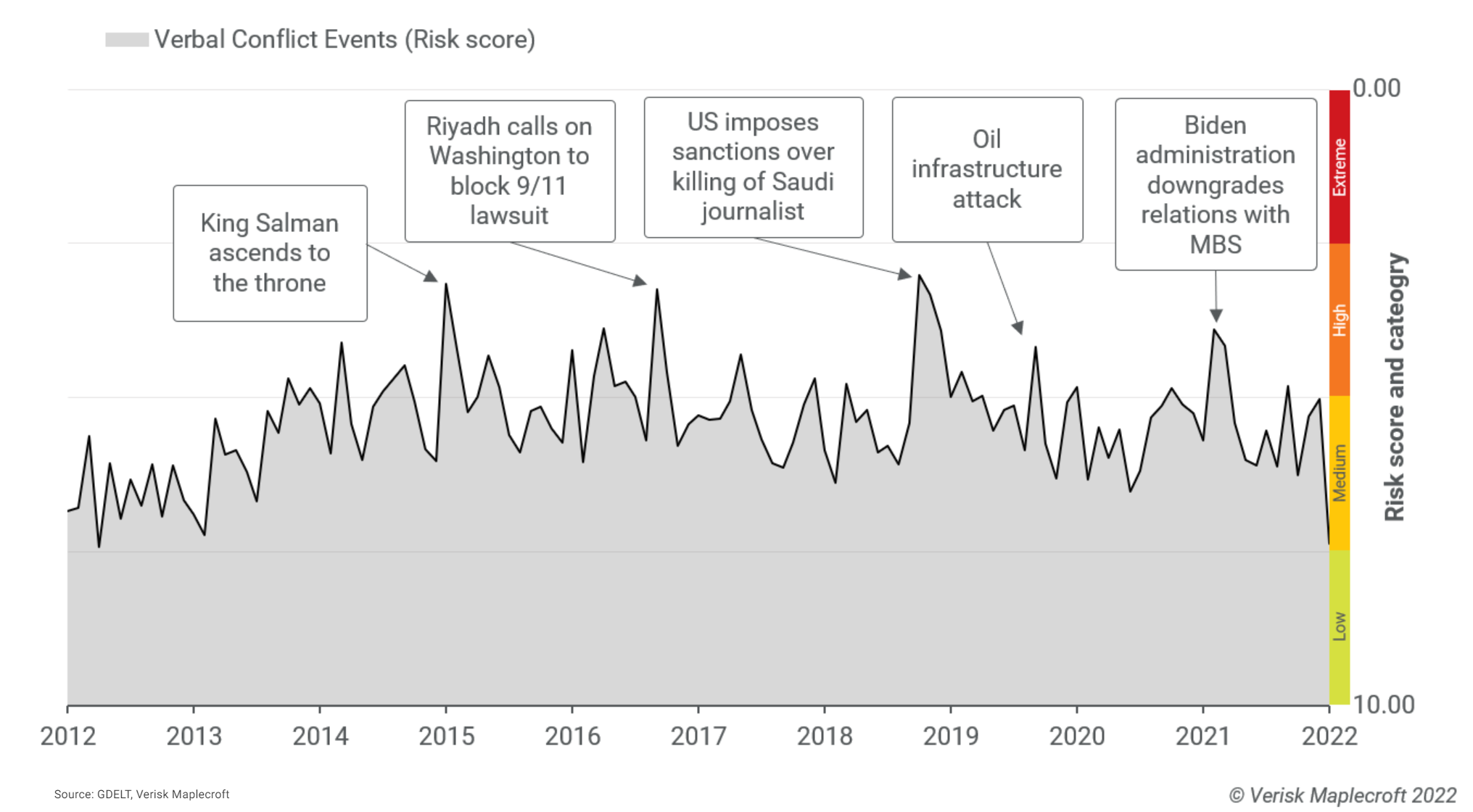 Saudi and US oil priorities diverging

Structural factors make the task of mending bilateral ties even more difficult. Concerns over spare capacity in particular mean that Saudi Arabia will be reluctant to accommodate US requests to ramp up production.

Saudi Arabia’s ability to increase production and exports rapidly is what has given it the ability to actively manage the oil market. Spare capacity is also a useful tool for compelling other producers to participate in collective action. In short, producers know that Saudi Arabia can use its spare capacity to revert to a strategy based on maximising market share if they do not fall in line.

Riyadh will want to ensure that it maintains enough of a buffer to protect its swing producer status. As the chart below shows, Saudi production has been rising steadily since March 2021 and is now above pre-March 2020 oil price crash levels. As of March 2022, Saudi Arabia’s production capacity stands at around 12 million bpd.

Riyadh has also made it clear that its concerns over spare capacity extend to OPEC+ as a whole. Saudi Aramco CEO, Amin Nasser, described shrinking global spare capacity as a “huge concern” in October 2021, in a strong signal that Saudi Arabia will resist US calls for OPEC+ taps to be opened further. 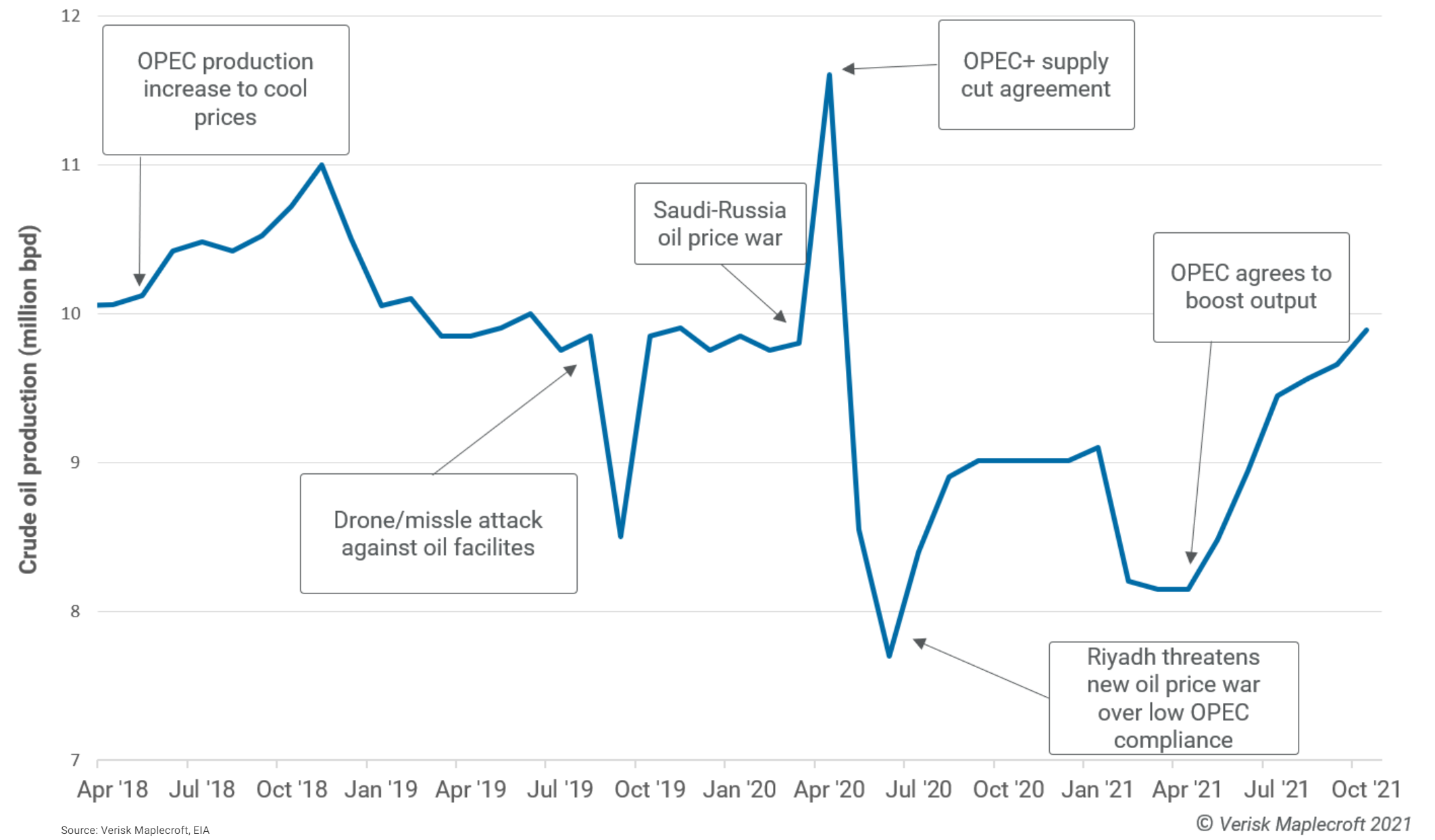 Another important structural challenge is the ongoing shift in oil export patterns from Saudi Arabia. More specifically, Asia’s share of Saudi Arabia’s oil exports increased from 65% in 2016 to 79% in 2021. Over the last two years, the implicit energy and security bargain between the US and Saudi Arabia has increasingly been brought out into the open where it has become exposed to criticism and scrutiny from US lawmakers.

Saudi Arabia fears that this will reinforce what is already a growing perception that the US is gradually disengaging from the region. The question of why the US should underwrite the security of Saudi oil exports will only become more pressing and vocal in Congress over the coming years, especially if relations with Saudi Arabia continue to weaken.

Demand destruction could bring US and Saudi interests closer together

The outlook for US-Saudi relations remains negative. Without greater US support in Yemen, and a greater say in the Biden administration’s Iran policy, it is unlikely that Saudi Arabia will consider calls to increase the rate of oil production.

The domestic political cost of a U-turn on Saudi Arabia for Biden is another obstacle that will have to be overcome if relations are to improve in the short term. The recent shift in the administration’s position on Iran and Venezuela nonetheless shows that Biden is willing to pay a political cost on the foreign policy front in a bid to bring down fuel prices at home.

Despite the negative outlook, Saudi and US interests will align more closely if rising oil prices start to damage global demand for oil. Although there are already signs of demand destruction in Europe and North America as a result of high prices, demand is growing in Asia as the region enters a post-recovery phase after the COVID-19 pandemic. Ultimately, commercial considerations will carry more weight than foreign policy incentives from the US.

Over the longer term, relations are likely to continue to weaken unless the US pivot away from the region under the last three US presidents is reversed. For now, the Biden administration is seeking only a short-term deal on oil policy, not a longer-term reset in US-Saudi relations.