Germany’s long overdue human rights mandatory reporting law, which looks set for passage in 2021, is going to level the playing field on human rights obligations for the country’s major corporate organisations. Companies less advanced in the discipline of managing social risks are going to be left playing catch up with their competitors though and will have to move now to redress the imbalance.

An internal memorandum, leaked in February 2019, suggests that the legislation will likely apply to companies in all sectors that have a registered office, central administration or principal place of business in Germany, and have over 250 employees and an annual turnover of more than 40 million euros – approximately 7,300 companies in total.

The bill means companies with already solid human rights policies will be able to compete on the same footing as companies that prioritise low costs over human rights.

These organisations will soon have no choice to implement such measures. It will be imperative for those starting from a low base to not only understand their obligations, but to develop robust systems to assess and mitigate their supply chain exposure.

Previously, the German government announced that the draft human rights due diligence bill would be introduced to parliament in August 2020. However, opposition from the Minister of Economic Affairs has postponed cabinet discussion until recently, delaying presentation of the draft bill to parliament.

Get in touch with us for a free assessment now

Sanctions will be harsh for non-compliance

While the legislation targets large companies, its effects will ripple across tier 1 suppliers globally. Extending due diligence efforts beyond tier 1 is unlikely, as Germany has just started developing a regulatory framework on supply chain due diligence and there is limited practice in Europe in moving further down the supply chain. According to a study commissioned by the European Commission, businesses that conduct human rights due diligence do so down to their first-tier suppliers only.

Companies face potentially severe economic sanctions for non-compliance, including fines of up to EUR5 million; exclusion from public procurement procedures in Germany; and potential imprisonment. In comparison to similar laws in France and The Netherlands which have lower fines, these sanctions seek to impose a stronger deterrent.

A company will only be liable if the damage caused was foreseeable and would have been avoided if due diligence measures had been in place. To meet this foreseeable and avoidable standard, companies must assess the risks particular to their countries of operation and sector, the likelihood and severity of the damage, and whether they are directly implicated.

What the bill means in practice

Identifying human rights risks, preventing damage and designing grievance mechanisms will require putting together a team that includes members of the sustainability, supply chain, human rights, legal and compliance departments. This multidimensional approach will result in due diligence processes that are better suited at helping the company meet the standards of the bill.

As with many other human rights bills that place obligations on business, the proposal is based on the UN Guiding Principles framework to prevent, mitigate and remedy human rights impacts. The bill would require companies to assess their global supply chains to identify actual or potential human rights impacts, appoint a compliance officer and set up grievance mechanisms. A key first step in this process is securing reliable and accurate human rights data that can be used to screen global supplier sites.

The proposal has gathered support from a broad spectrum of stakeholders, including more than 60 high-profile companies, 100 civil society organisations and 200,000 citizens. Detractors include heavyweights like the foreign trade association BGA, the federation of German industries (BDI), and the Minister of Economic Affairs. 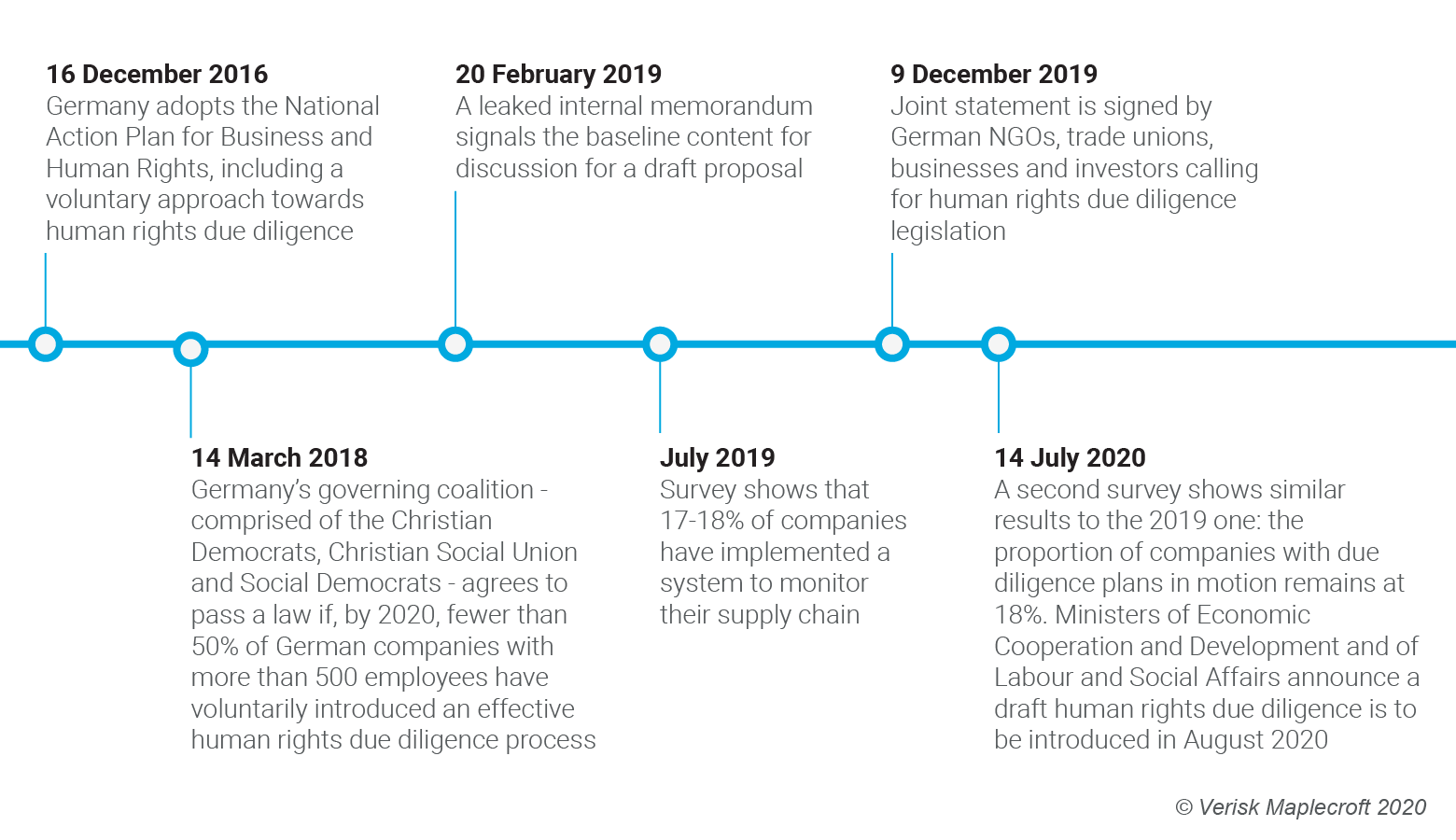 Working with clients in every sector

Fill in the form to get a free assessment now

The German Supply Chain Act (LkSG): How to get started on risk analysis