As the economic fallout from COVID-19 mounts, protests in emerging and frontier markets are set to swell with millions of newly unemployed, underpaid and underfed citizens, posing a risk to domestic stability with few parallels in recent decades.

This stark assessment comes on the back of the release of our latest Civil Unrest Index Projections this week. We’ve identified 37 countries that will face major spikes in unrest during the second half of this year, driven by a painful post-pandemic economic recovery that will inflame existing public anger with governments.

Economies facing a ‘perfect storm’ of risks are mostly concentrated in Africa and Latin America, including Nigeria, DR Congo, Ethiopia, Venezuela and Peru. But investors, companies and insurers in key emerging markets, such as Bangladesh, Turkey and Egypt, will also need to brace for an explosive end to the year.

Jump to the form below to download the full study

According to ACLED incident data, unrest in emerging and frontier markets fell in March, following the widespread introduction of lockdowns. But protests are hitting the streets worldwide once more, as long-standing grievances over socioeconomic inequalities, civil and political rights and government corruption resurface.

The total number of protests in frontier and emerging markets has almost rebounded to pre-pandemic levels. With many countries still in lockdown, and the full economic shock of the outbreak yet to be felt, we expect the number of protests to surge over the next 2-3 months.

The outlook is particularly concerning for frontier and emerging markets where the post-pandemic economic picture is bleak. Using data from our six-month Civil Unrest Index Projections and Recovery Capacity Index (RCI), we’ve found 37 countries with both a low level of recovery capacity and high projected levels of unrest in the next six months. The RCI measures a country’s ability to bounce back from the pandemic by assessing the strength of state institutions, physical and digital connectivity, economic dynamism, population sensitivity, and country-specific factors, such as natural disasters or terrorism, that could impede recovery. 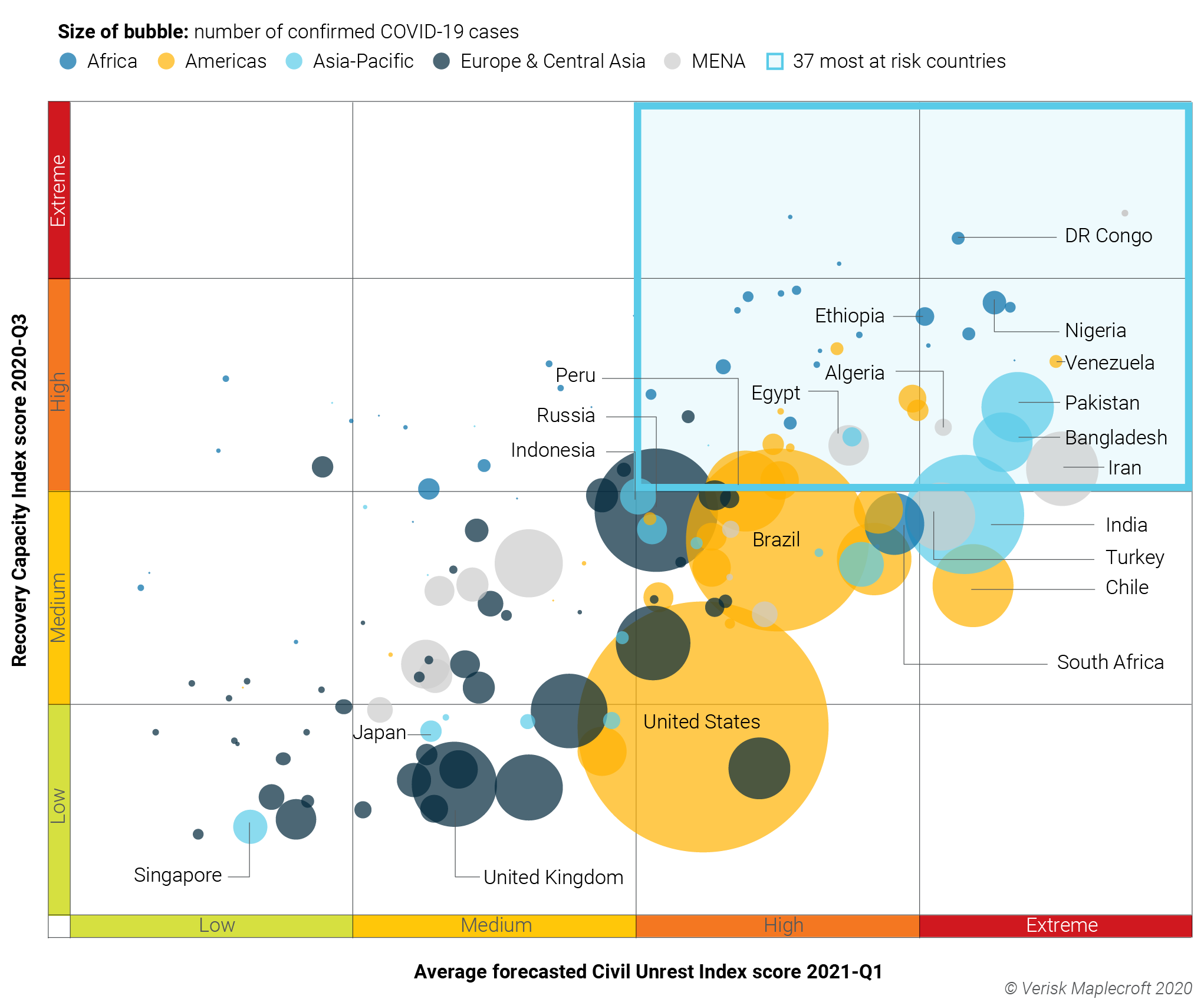 The highest risk countries include Nigeria, Iran, Bangladesh, Algeria and Ethiopia, which face a ‘perfect storm’ of popular anger as protests driven by the pandemic’s economic fallout inflame unrest over pre-existing grievances.

However, several major emerging markets, including India, Brazil, Russia, South Africa, Indonesia and Turkey, sit just outside the ‘perfect storm’ category. Risks in these countries are only slightly less acute and still constitute a significant threat to stability.

Countries from every region, except Europe, fall into the highest risk category, including major emerging markets such as Bangladesh (currently the world’s 12th riskiest jurisdiction in our 2020 Q3 Civil Unrest Index), Pakistan (16th) and Egypt (27th). But the majority of the 37 states are located in Africa and Latin America.

In sub-Saharan Africa, the risk of protests is set to intensify amid economic decline, poverty, and inability to guarantee adequate food supplies. Key markets to watch include Nigeria (11th), Ethiopia (14th) and DR Congo (15th). This volatile climate only requires a spark to set off major unrest. This has already happened in Ethiopia, where recent mass protests, triggered by the killing of prominent Oromo activist musician Hachalu Hundessa, claimed 166 lives.

In Nigeria and DR Congo, growing food insecurity is stoking anger. Although rice production in Nigeria is increasing, it is still insufficient to feed Africa’s most populous country. Lagos has seen food prices increase by up to 50% in recent months and it’s a similar picture in DR Congo, where the rising cost of staples has led to unrest in Kinshasa and other cities, including the mining hub of Lubumbashi.

Find out more about our Country Risk Intelligence

The biggest spikes in unrest for Latin America are forecast to happen in Venezuela (3rd worst performer in 2020-Q3 Civil Unrest Index) and Peru (55th). But the region’s major economies will not be immune – Chile, Brazil and Argentina hover just above the ‘perfect storm’ category, where future risks are skewed significantly to the downside.

Our base case from January – that 2020 will see a surge in protests and that the coming decade is set to be a one of unprecedented unrest – still stands. But in the countries least prepared to bounce back from the pandemic, it now looks like a best-case scenario.

Anger over structural problems has not gone away

While strong recovery capacity limits the level of risk, it does not eliminate it, particularly where pre-existing grievances centre around political rights or other structural issues. India (21st) remains focused on tackling an explosion of coronavirus cases, but anger over the Citizenship Amendment Act is set to resurface. And while Hong Kong (28th) quickly suppressed the first wave of the coronavirus outbreak, anti-government protests have resumed and will continue despite the recently introduced national security law.

The outlook is also negative for the US, which is now the 48th riskiest jurisdiction globally after recording the second biggest drop on our Civil Unrest Index between 2020-Q2 and Q3. The combination of the Black Lives Matter protests, alongside mounting frustration over job losses and President Trump’s weak pandemic response means more unrest is inevitable.