Leading emerging markets (EMs), including South Korea, Mexico and Indonesia, are making strong progress on ESG, according to our recently launched Sovereign ESG Ratings. However, their progress stands in stark contrast with many of their developed market (DM) counterparts, which are moving in the opposite direction due to deteriorating social and environmental standards.

Looking at 5 years of trends for the G20 across 37 risk issues and nine ESG dimensions, our data shows that the gap between EMs and DMs is closing. And in some cases, it has already closed (see Figure 1). The US is singled out as a clear outlier among its DM peers, with an ESG profile much closer to that of an emerging market. Conversely, South Korea now out-competes several DMs.

The burning issue for EM investors at the moment though is that nobody wants to be exposed to the next Russia. For years prior to Moscow’s 'special military operation' against Ukraine, the red flags have been there to see in our data. The country has languished among the poorest performers on a range of ESG metrics– especially on the human rights and governance fronts. EM fund managers will now need to put all weak ESG performers under the microscope, whether or not they are gradually improving.

The unprecedented scale and speed of investor and corporate divestment from the country underscores the need for EM asset managers to urgently reappraise their approaches to ESG integration. Taking stock of exposure to poorly-performing countries across all areas of ESG should now be paramount, not only to protect longer-term portfolio value as macro headwinds on the asset class increase, but to align with the expectations of clients and regulators, says David Wille, Principal Markets Analyst

Figure 1: ESG performance of key G20 EMs rising, with most DMs flat or falling – including the United States 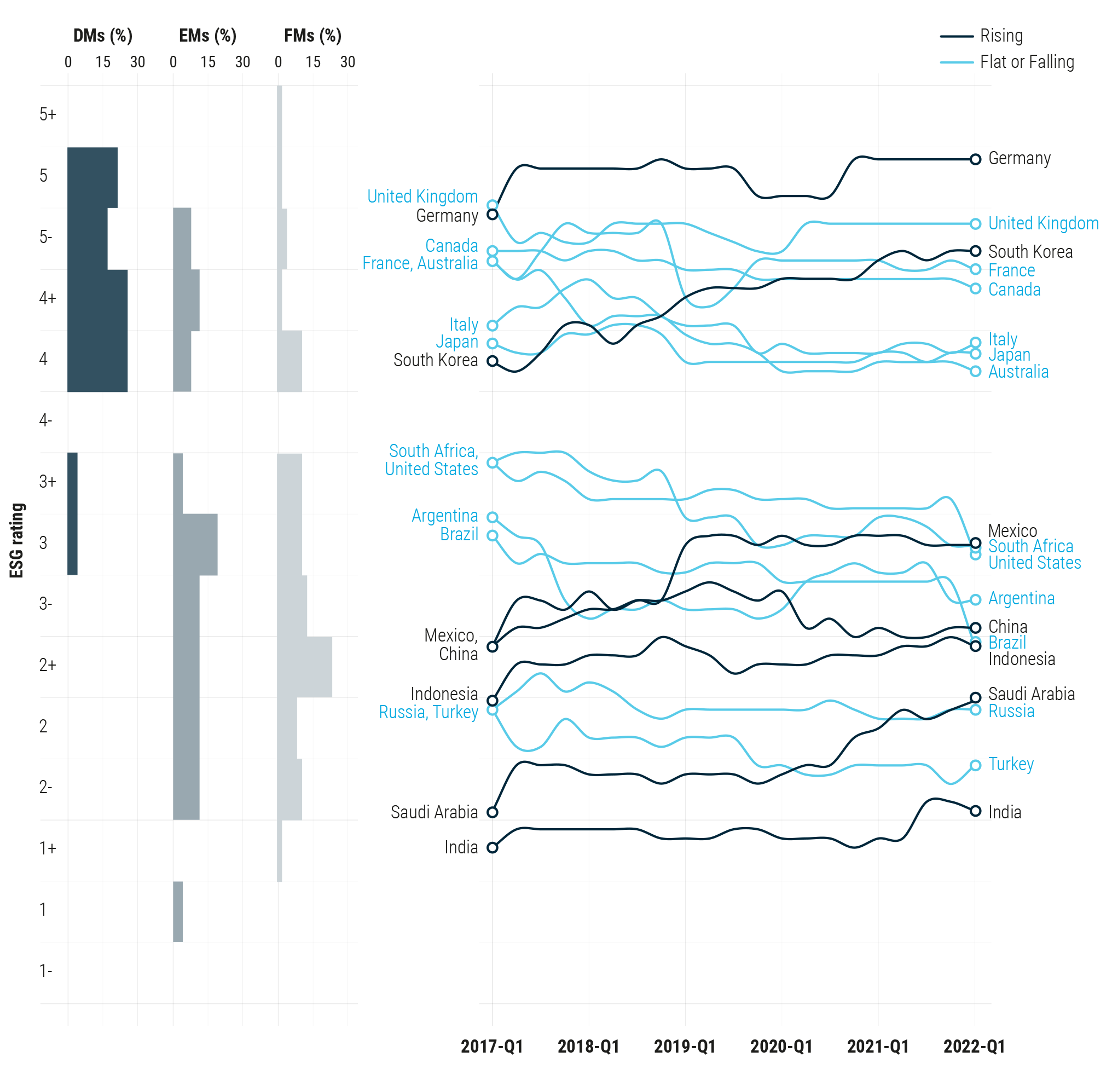 Figure 1: ESG performance of key G20 EMs rising, with most DMs flat or falling – including the United States

As shown in Figure 1, Russia has long ranked among the least sustainable G20 sovereigns, with an ESG rating of 2 that has largely stayed flat over the past 5 years. Unlike other providers of sovereign ESG analysis, we have no plans to manually ‘adjust’ Russia’s ESG rating in response to the conflict. This is partly because the firm’s ratings are data-driven outputs, not post-hoc qualitative judgements – but also because the country had already hit bottom on the key human security and governance indicators that would otherwise need to change to reflect events on the ground in Ukraine.

Nevertheless, our Sovereign ESG Rating for Russia is likely to fall further in the coming weeks to reflect the second-order effects of the conflict. New constraints on human rights are already in train as Moscow seeks to get ahead of domestic unrest and enforce its own interpretation of events in Ukraine. The economic impacts of sanctions are also likely to erode other aspects of ESG over the coming months and years. It’s not yet clear whether this will be enough to push the country down a full notch – the algorithm underpinning the Ratings is unsupervised – but the overall outlook is unequivocally negative.

The momentum dilemma: how gradual is too gradual?

Russia’s actions in 2022 underline that identifying ESG trends in sovereigns worldwide is going to be key for investors going forward.

From a global perspective, the Sovereign ESG Ratings’ overall scores reveal that Europe has the highest share of countries in the top tier of performance, while most in Sub-Saharan Africa, MENA and Asia feature among the lower echelons. South & Central America and Oceania sit in between. Top performers include Slovenia, Germany, Luxembourg, Switzerland and Croatia, while frontier markets such as Pakistan and Bolivia bring up the rear.

But beneath these familiar regional disparities, the Ratings reveal a picture of dynamic change over the past five years. Within the G20, which accounts for 80% of global GDP, developed markets still score higher than EMs, but many of them look less attractive from a momentum perspective. On the other hand, several key EMs in this group witnessed improvements in their scores, South Korea and Mexico strikingly so, both moving up two notches in their Sovereign ESG Ratings due to their strengthening social risk profiles.

For other G20 EMs that are improving, however, managers will need to tread carefully. Many are used to justifying their holdings on the basis of improvement from a low base, especially in cases where they are demonstrably engaging with governments to press for reform. But the Russia-Ukraine crisis shows every sign of further diminishing the tolerance of asset owners and regulators for ESG integration that stretches the credibility envelope. This matters because, as per our previous research, much of the EM and FM debt universe remains firmly underwater on key aspects of S and G, especially human rights.

These caveats should be top of mind when examining Indonesia and Saudi Arabia, for example. Their ratings – now 2+ and 2 respectively – have been boosted by reductions in civil unrest, government instability or crime. But for the government in Riyadh, this has come without any corresponding improvements in political freedoms and the human rights environment remains a major concern.

The Ratings also flag up the potential for serious further trouble ahead for investors whose ESG talk gets ahead of their walk. Turkey, currently making diplomatic hay out of the Russia-Ukraine crisis, stands out among G20 EMs as a very poor performer that has got even worse since 2017, and is now rated only 2-. Alongside long-standing violations of human and labour rights, deteriorations in governance have been particularly noteworthy. The years since 2017 have seen growing corruption, weakening judicial independence, the erosion of democracy, and a fraying regulatory system; as well as significant increases in crime and civil unrest. Of note here is that the country constitutes a much greater share of key EM benchmarks than Russia did.

The US: no longer a DM when it comes to ESG

Beyond these EM dilemmas, the Sovereign ESG Ratings also highlight trouble spots in the DM universe. Most striking of all is the position of the US, which from an ESG perspective is now ‘de-merging’ and is only rated a 3.

The dollar still bankrolls much of the world, and US industries continue to drive a sizeable share of global value creation. However, the country resembles an emerging market on many facets of ESG; long scoring below the Americas average on the environment pillar, performing relatively poorly on the human and labour rights dimensions of the social pillar compared to other developed markets, and now even appearing shaky in the ‘sources of instability’ dimension of governance risks.

Emerging markets are central to what comes next for sovereign ESG

The outlook for sovereign ESG is full of contradictions. There is cause for optimism, because investors’ collective commitment to hold governments fully to account on energy transition, natural capital, human rights, and democratic governance has never been higher. However, at the same time, the climate emergency is accelerating, a biodiversity crisis is looming, and human rights and political freedom remains on the backfoot in many parts of the world.

“If ESG-aware investors are to successfully use their leverage to help address these challenges, emerging markets will have been central to their calculus,” says James Lockhart Smith, VP Markets. “The lesson from our data is that positive change among major EMs isn’t just possible, in some cases it is already happening – but the Russia debacle shows how much investors need to pay attention to the details and ensure their portfolios genuinely reflect their ESG mandates and values.” 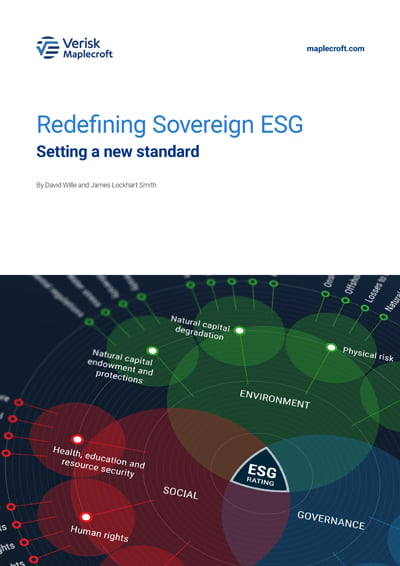