Saudi Arabia is approaching COP26 with a clear message: the kingdom will embrace net zero by 2060 and at the same time consolidate its position as the world’s largest oil exporter. In short, the intention is to use revenues from advantaged oil resources to develop solar power, wind power and clean hydrogen. Over the next four decades, the intention is to spend USD187 billion on a broad range of measures that will put Saudi Arabia on track to net zero by 2060.

The decision by Crown Prince Mohamad bin Salman (MBS) to not attend the two-day world leaders' summit is nonetheless telling. Riyadh is acutely aware that recent efforts to transform the country’s image on the world stage have amounted to little. Its ‘Davos in the Desert’ investment conference in 2018 was overshadowed by the killing of Saudi journalist Jamal Khashoggi. And last year, international focus during the G20 leaders’ summit hosted by Saudi Arabia centred on ongoing human rights violations. There is no doubt that MBS now faces a daunting task as he prepares to argue the case for fossil fuels in the global energy transition.

Saudi net zero plan will be met with scepticism

The decision to set 2060 as the net zero target year is no coincidence. Riyadh has consistently stressed that the global energy transition should move at a pace that doesn’t disrupt the Saudi or global economy. Similarly, Saudi Arabia continues to warn against cutting off global oil supply too quickly and assuming that demand will fall at the same rate. High oil prices and growing pressure on Saudi Arabia from the US, Japan and India to produce more oil will make it easier for MB to defend this position during COP26.

Saudi Arabia will still face criticism over the timescale of its net zero pledge, and scepticism over its spending promises. Such scepticism is not unfounded. Environmental, economic and social targets outlined in MBS’s Vision 2030 reform programme have frequently been scaled back or fallen far short of expectations.

As an example, Saudi Arabia’s initial aim of 50% renewable energy by 2030 has been downgraded to 30% and now includes nuclear energy. The target of 27.3 GW renewable energy capacity by 2023 remains well beyond reach; only 0.5GW is currently installed. As the chart below shows, both the UAE and Oman have jumped out of the starting blocks more quickly among the Gulf Cooperation Council states. 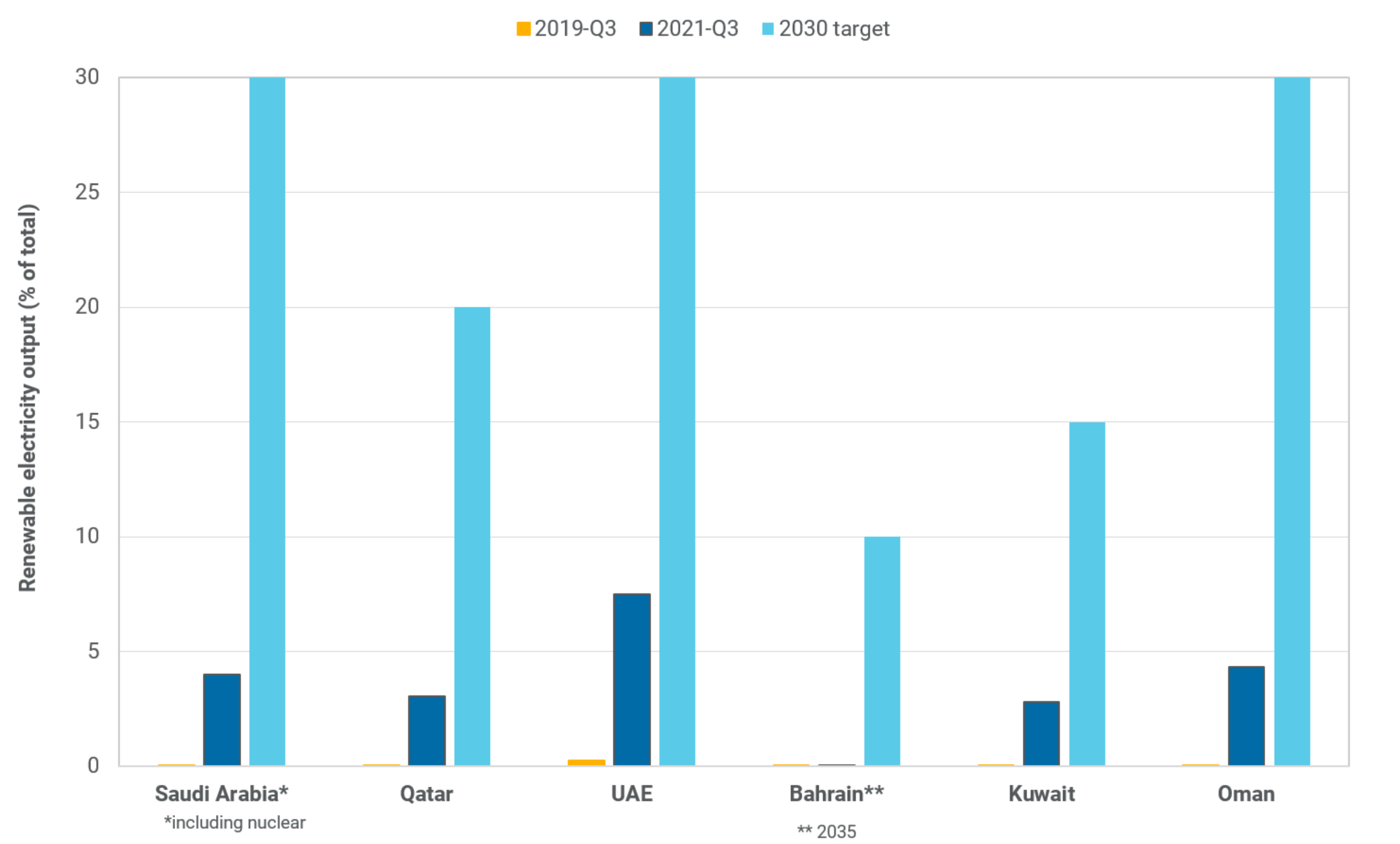 Saudi Arabia’s energy transition plan is underpinned by two key assumptions. First, that demand for oil will remain strong over the coming five decades. And second, that revenues from oil will be necessary to fund the development of solar, wind and clean hydrogen projects.

The level of uncertainty over the direction of oil demand stands out as one of the biggest challenges for Saudi Arabia. On one end of the spectrum OPEC expects oil demand to increase by 2050. On the other end of the spectrum the IEA’s Net Zero by 2050 roadmap outlines a 75% fall in demand during the same period. Between these two extremes, there is a broad range of scenarios that Saudi Arabia will have to prepare for.

Uncertainty over the direction of oil demand aside, plans to expand production capacity to 13 million bpd by 2027, at a cost of USD30 billion, shows that Saudi Arabia is putting its money where its mouth is. Saudi Arabia’s expansion strategy is underpinned by low production costs as well as the relatively low carbon intensity of Saudi oil production. As the chart below shows, Saudi Aramco’s net emissions intensity is lower than for all of the oil majors. 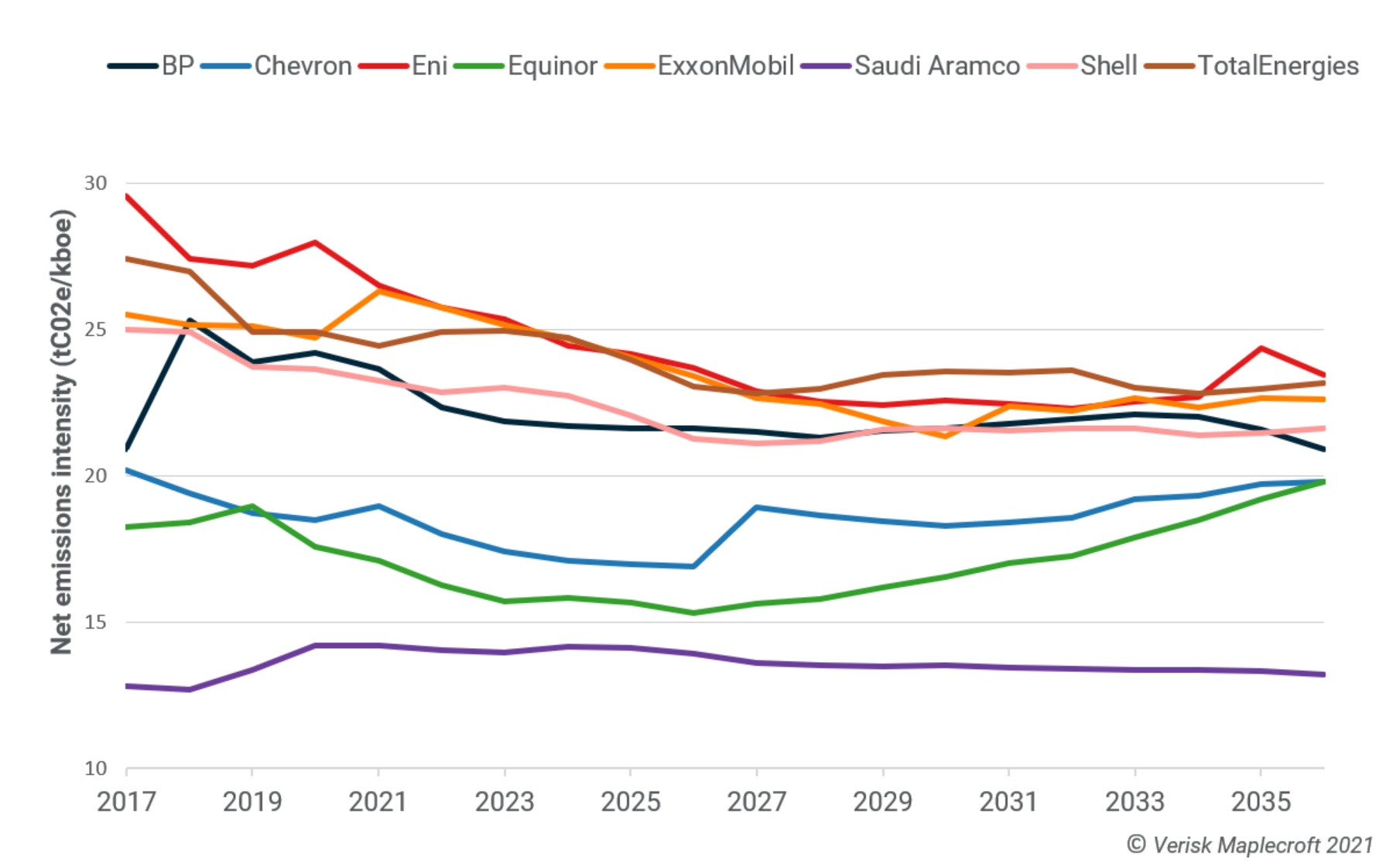 Picking up the pace of renewable energy development will be crucial

Saudi Arabia’s determination to keep oil at the centre of its energy transition will not weaken unless demand for oil falls sharply over the coming years and decades. Even if demand falls, Saudi Arabia’s intention is to use its low production costs and low upstream carbon intensity as trump cards in the global energy transition. It is also clear that there is a potential upside for Saudi Arabia as pressure from investors and governments brings down production amongst the oil majors.

But Saudi Arabia will also have to prepare for what could a considerable downside if the global energy transition accelerates faster than expected. With benchmark crude oil prices above USD80 per barrel, Saudi Arabia is not short on incentives to build out its renewable energy capacity. Most importantly, it will help free up barrels for export. Currently, the kingdom burns between 300,000 and 700,000 bpd for power generation. Making renewable energy competitive with cheap electricity generated from oil will be costly both in economic and political terms. But it will be a small price to pay if Saudi Arabia’s assumptions about the global energy transition turn out to be wrong.