Over the last 16 months, Saudi oil policy has been clear: marshal producers to support and stabilise prices to counter the negative impact of COVID-19. Although this is still the case, the question of if and when Saudi oil policy will change is becoming more pressing.

Not only is OPEC+ gradually raising volumes, but Saudi Arabia has also reaffirmed its commitment to increase its production capacity from 12 million bpd to 13 million bpd. In the months ahead of OPEC’s oil market review in December 2021, spare capacity will be an important indicator of the kingdom’s long-term oil policy priorities.

The biggest argument against an immediate change in Saudi oil policy is the ongoing uncertainty over the impact of COVID-19 on oil demand. Saudi Aramco’s announcement in August 2021 that it will be at least two years before it reaches the 13 million bpd target suggests that Saudi Arabia is adopting a wait-and-see approach to cushion itself against further demand shocks.

Part of the uncertainty over the government-mandated increase stems from the timing of the original announcement. The decision was made during the short-lived oil price war in March 2020 when production reached an all-time high of 12 million bpd, as highlighted in the chart below. The subsequent OPEC+ oil supply cut agreement in April a month later put the planned increase on the backburner while Saudi Arabia and the rest of OPEC+ delivered an unprecedented 9.7 million bpd cut. 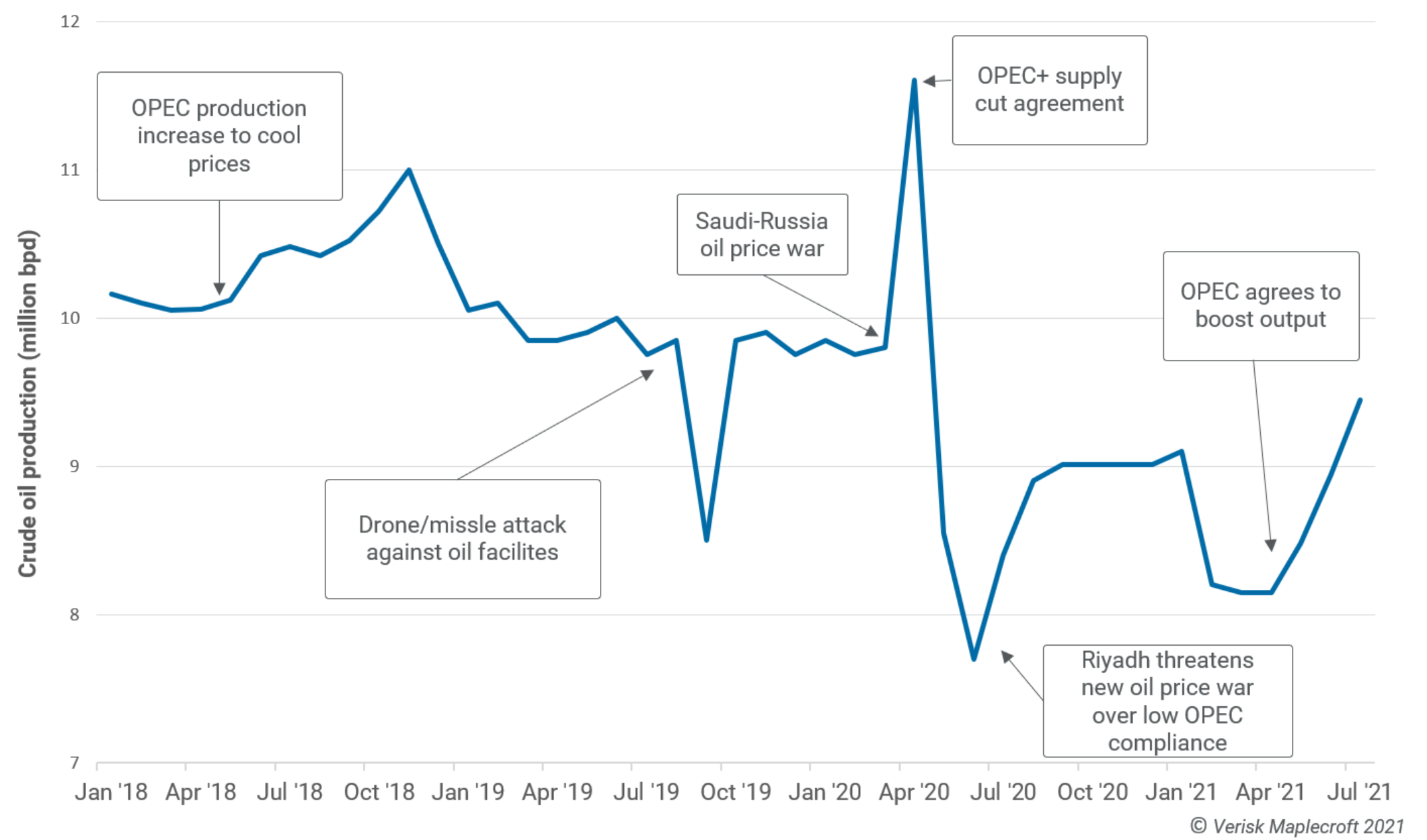 Saudi Arabia hoping to turn energy transition to its advantage

Uncertainty over the pace and implications of the global energy transition will be another important variable in Saudi deliberations over spare capacity. The intention to expand production capacity further is nonetheless unsurprising given Saudi Arabia’s stated ambition to use its low production costs and relatively low upstream carbon intensity as trump cards in the global energy transition. As the chart below shows, Saudi Aramco’s lifting costs are significantly below those of major IOCs, making it less exposed to a fall in demand and prices.

At 10.5 kg of CO2e/boe, the carbon intensity of Aramco’s upstream operations is also well below the collective target set by 12 of the world’s largest oil companies to reduce their average upstream carbon intensity to 20kg of CO2e/boe by 2025. Although net annual emissions incorporating all operations are still higher than for Equinor, BP and Shell, the chart below shows that Saudi Aramco is projected to steadily lower its emissions intensity over the next 15 years. 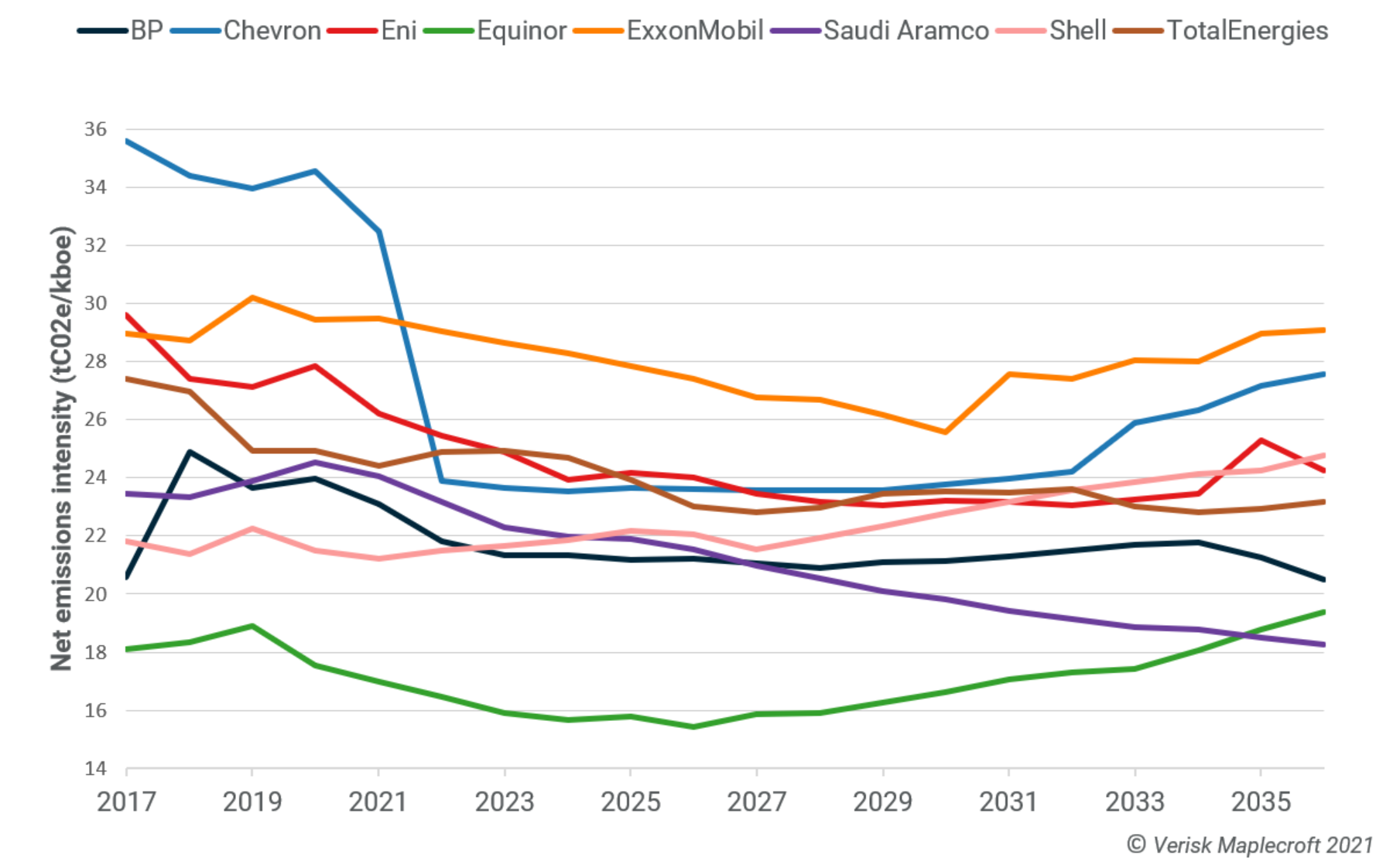 A big part of the challenge facing Saudi oil policy decision-makers is that the most important variable – oil demand – also holds the most uncertainty.

The IEA’s Net Zero by 2050 roadmap outlines a 75% fall in the demand for oil between 2020 and 2050. It would be an understatement to say that Saudi Arabia doesn’t find this scenario likely; in July 2021, Saudi energy minister Prince Abdulaziz bin Salman dismissed the report as “La La Land”. Under a less dramatic scenario based on existing and planned net zero pledges, the IEA foresees a 10% drop in demand by 2050. In contrast, Wood Mackenzie’s long term demand outlook sees an increase of 6.2% during the same period.

Given the uncertainty on the demand side, the priority for Saudi Arabia will be to make its upstream sector as competitive as possible by continuing to lower its carbon intensity while benefitting from low lifting costs. In addition, there is little doubt that Saudi Arabia is hoping that pressure from governments and investors will gradually bring down production among the majors, leaving Saudi Arabia with greater market share.

Despite concerns over COVID-19 and the impact of the energy transition, there are several reasons why the planned production capacity increase will ultimately be delivered.

First, Saudi Arabia’s ability to increase production and exports rapidly is what gives it the ability to actively manage the oil market and impact prices.

Second, spare capacity is a crucial tool in compelling other producers to participate in collective action. Producers know that Saudi Arabia can use its spare capacity to revert to a strategy based on maximising its market share. This implicit threat is also one of the few ways in which Saudi Arabia can enforce compliance during production cut agreements. Although attempts to rapidly capture market share have backfired more often than not – including most notably in 1986, 1997, 2015 and 2020 – it remains a credible threat.

Third, spare capacity also offers the potential for upside in the event of sudden supply shocks and shortages. For example, the energy transition – if slower than anticipated – could leave supply elsewhere falling at faster rate than demand for oil.

Risk of sudden shift will be higher in 2022

As we cautioned before the March 2020 oil price war, the risk of unpredictable oil policy decisions has increased as a result of the shift to a more centralised system of governance under the de-facto leadership of Crown Prince Mohamad bin Salman.

But for now, there is little to suggest that Saudi Arabia will change tack and abandon its focus on market stability and price management. Costs associated with Vision 2030 and high levels of state spending mean that despite being one of the world’s lowest-cost producers, Saudi Arabia is highly sensitive to a fall in the price of oil. In parallel, falling reserves have made the initial pain of low oil prices associated with a market share-based strategy more difficult to bear.

The rift with the UAE in July 2021 nonetheless underscored that as the impact of COVID-19 wanes, cracks are likely to emerge within OPEC+ as producers will want to exit the agreement at different stages. If and when that happens, Saudi Arabia will be in a stronger position with a higher production capacity. This will be the case whether the intention is to capture a greater share of the market or again use its capacity to compel producers to continue cooperation.