by Arun Pillai-Essex and Will Nichols, 23 December 2020

Yet, the issue that will likely define the Biden administration’s long-term legacy will be whether progress has been made towards tackling the global climate crisis. On this front, Biden has little room for manoeuvre, but must overcome significant obstacles.

Biden's climate change plan is the most comprehensive ever released by a presidential candidate. Spurred by the progressive flank of the Democratic Party, his proposal contains ambitious pledges to spend USD2 trillion over four years, setting the US on a path to achieve 100% clean electricity by 2035 and zero carbon emissions by 2050.

Since his Electoral College victory, Biden has announced several candidates for posts that emphasize the prioritisation that climate change will receive across the federal government. However, standing in the way of Biden's climate agenda - and his other big-ticket items - is a deeply divided Congress, where the threshold to enact most legislation requires a super-majority of 60 votes.

Even in the unlikely event the Democrats win both Senate races in Georgia, the party will remain 10 votes short of this mark. As such, Biden's administration will be forced to rely heavily on the use of executive orders and rule-making powers under the discretion of the federal government to reduce carbon emissions.

Alongside re-joining the Paris Accord, the Biden administration will seek to swiftly reverse the environmental de-regulatory agenda of his predecessor. Trump, using powers vested in the executive branch, repealed or weakened approximately 125 regulations, including rules governing energy efficiency standards and fuel economy regulations for cars and trucks. As a result, the United States' score has trended downwards in our Environmental Regulatory Framework Index over the course of Trump's presidency (see below).

Biden will aim to reverse many of these and reaffirm consideration of environmental impacts within the National Environmental Policy Act (NEPA) process and strengthen provisions under landmark conservation laws like the Endangered Species Act and Clean Water Act. Bolstering the Environmental Protection Agency (EPA) will also be a major focus after four years of inertia. The agency is likely to take on a more maximalist interpretation of environmental statutes while doing away with the cosy relationship with industry that characterized the regulatory body over the past four years. 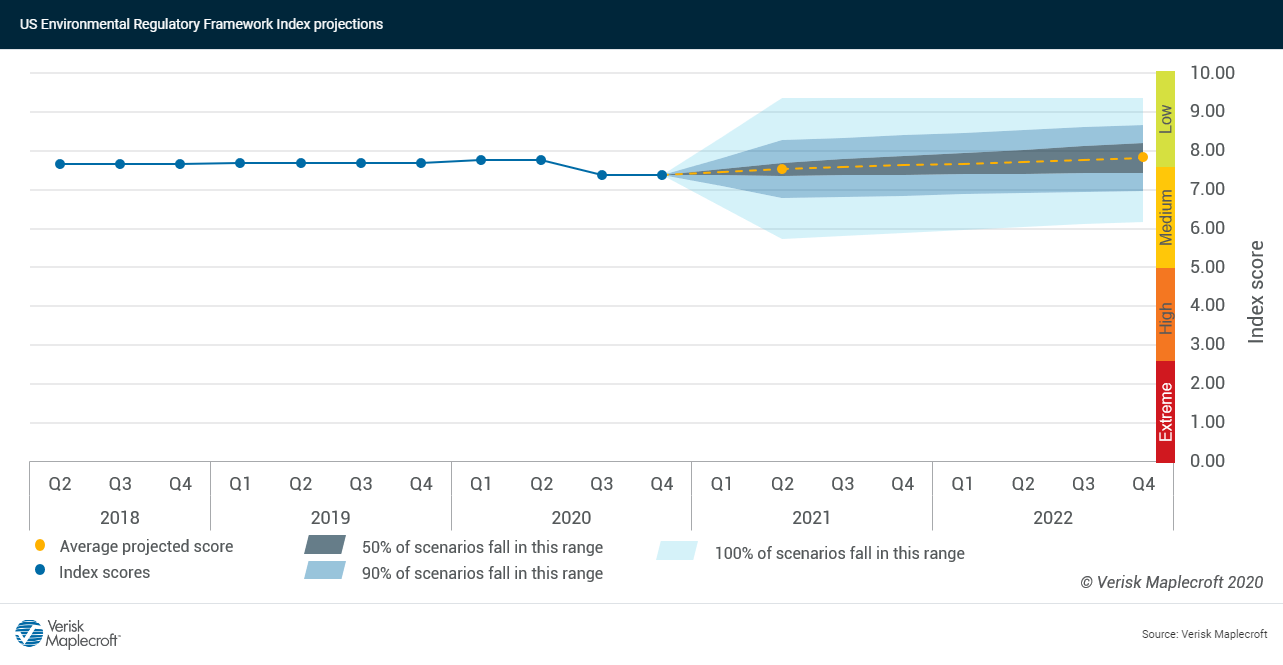 In parallel with seeking to reverse Trump’s de-regulatory agenda, the administration is expected to focus executive action in key areas. These are likely to include targeting methane leaks from oil and gas operations, and curbing pollutants such as hydrofluorocarbons (HFCs) and gas from landfills.

Biden is also likely to pair an order requiring public companies to disclose climate risks in their operations and supply chains with moves to encourage carbon reduction by leveraging existing regulations governing the financial services.

Under Dodd-Frank (2010), the Biden administration could compel banks and other large-scale financial institutions to limit their exposure to fossil fuels through oversight and compliance mechanisms under the Treasury Department, Federal Reserve and Securities and Exchange Commission. Such a push would be bolstered by the Fed forgoing its disregard for climate issues and joining the Network for Greening the Financial System, a group of central banks working to address the risk global warming poses to their economies.

While most regulatory intervention related to climate change will emerge out of the executive branch, Congressional Democrats will be eager to shoe-horn climate change and energy spending as part of any future stimulus package. Biden is expected to work closely with Congress to push funding for green infrastructure and establish tax credits for clean energy sources like wind and solar. There is scope for bipartisanship in this regard, as many top wind and solar power producing states are represented mostly by Republican officials at the federal level (e.g. Texas, Oklahoma, and Kansas).

Carbon pricing is another area of potential bipartisan compromise. The Republican Party was historically in favour of this market-based approach before switching their stance following its passage in the Democratic-controlled House under the Obama administration (2009). In recent years, several bills have circulated Congress attracting a modicum of cross-party signalling a potential revival under a divided government.

Given the sharp cleavage in preferences on climate and environmental policy between the Trump and Biden administration, we forecast some initial short-term volatility in the policy landscape. This is reflected in our Environmental Regulatory Index Projection which demonstrates a wide latitude for significant reform at the federal level, but trends towards low risk over the two year period. Nevertheless, rules and enforcement mechanisms at federal bodies like the EPA are likely to be strengthened providing greater clarity for business planning and long-term investment decisions.