Modern slavery risks have risen in nearly three quarters of the 28 member states of the European Union over the last year, reveals our annual study.

According to the 2nd edition of the Modern Slavery Index (MSI), the five EU countries posing the highest risk are Romania, Greece, Italy, Cyprus and Bulgaria – key entry points for migrants into the region who are extremely vulnerable to exploitation. The research, which assesses 198 countries on the strength of their laws, the effectiveness of their enforcement and the severity of violations, shows drops in the scores for 20 countries across the bloc.

Slavery in Romania is deemed as worse than any country globally, with it falling 56 places in the ranking to 66th highest risk. Romania and Italy (ranked 133rd), which fell 16 places, have the worst reported violations in the EU, including severe forms of forced labour, such as servitude and trafficking.

The risk of modern slavery in Romania isn't the only concern. The International Organisation for Migration estimates that over 100,000 migrants have entered Europe by sea in 2017; 85% of which have landed in Italy. Arrivals in Greece (129th) have fallen dramatically since the 2016 signing of the EU-Turkey Refugee Agreement, but the country, which dropped 17 places in the index, is host to significant numbers of migrants and remains a key destination for human trafficking and labour exploitation.

According to our data, the presence of these vulnerable migrant populations in the primary countries of arrival is a key contributor for increases in slavery across multiple sectors in the region, such as agriculture, construction and services.

Due to the geographic shift in migrant sea arrivals, we expect the risk of modern slavery to worsen in Italy over the next year, with agriculture a sector of concern.

“It is no longer just the traditional sourcing hotspots in the emerging economies that businesses should pay attention to when risk assessing their suppliers and the commodities they source," states Sam Haynes, Senior Human Rights Analyst.

“The migrant crisis has increased the risk of slavery incidents appearing in company supply chains across Europe,”

Even the EU’s biggest economies are not immune to the rise in slavery risk and labour exploitation. Germany and the UK have seen slight negative shifts in their scores, taking them just over the ‘low risk’ threshold into the ‘medium risk’ category of the index. New data has revealed gaps in the UK’s labour inspectorate, while Germany has experienced an uptick in recorded trafficking and servitude violations. 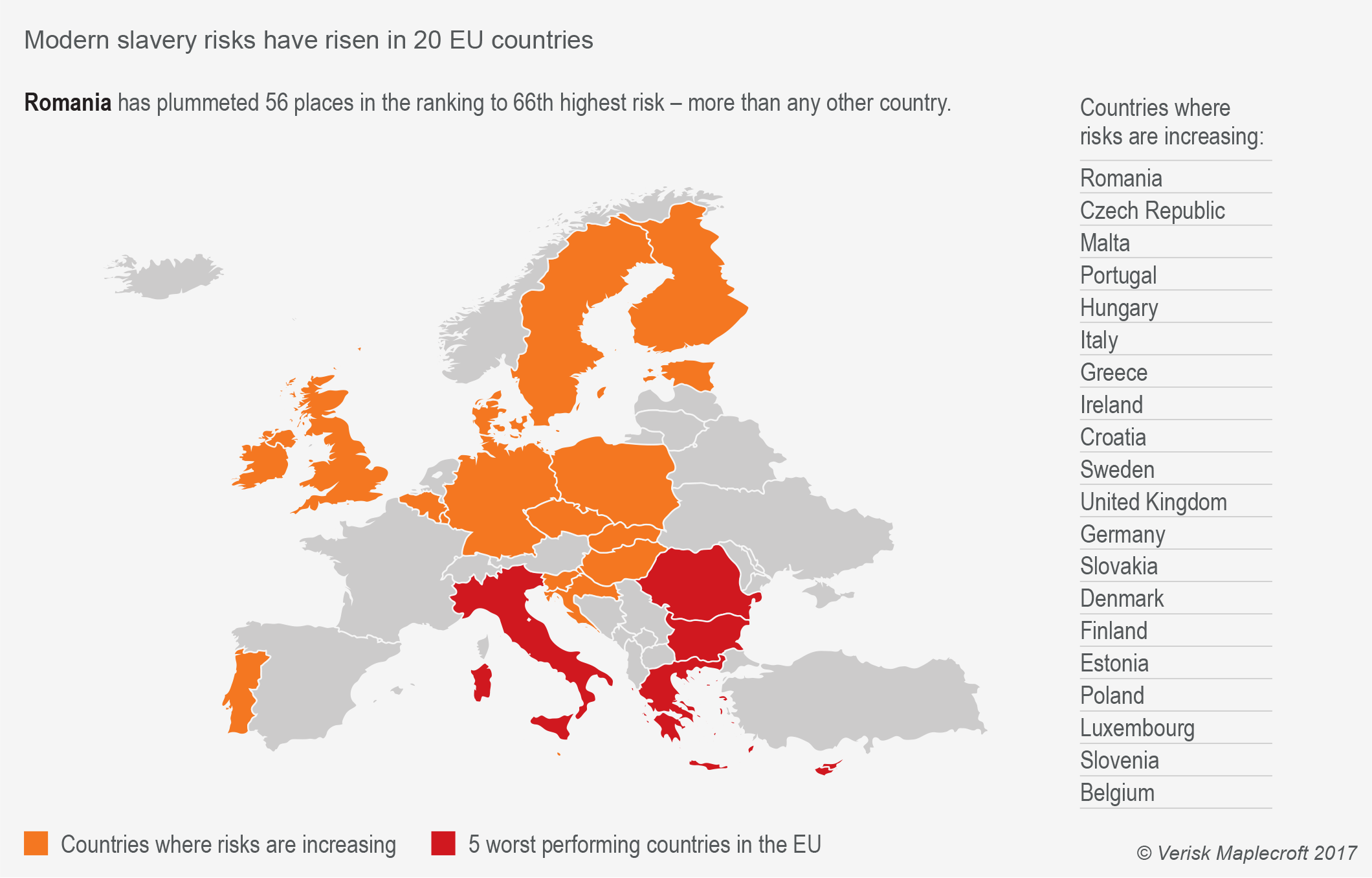 Outside of the EU, Turkey experienced the world’s second largest drop in the Modern Slavery Index, falling from 110th to 58th most at risk and slipping into the ‘high risk’ category. The influx of 100,000s of refugees from the Syrian war, combined with Turkey’s restrictive work permit system, has led to thousands becoming part of the informal workforce. Policing labour violations is also no longer a priority for the government, which is focused on the political crackdown, further adding to the risk.

Over the last year, several large brands sourcing from Turkish textile factories have been associated with high profile incidents of child labour and slave labour exploitation. Companies importing agricultural goods, such as hazelnuts and cherries, are also exposed to a high risk of complicity with forced labour abuses, according to our commodity risk analysis.

With new and emerging legislation on modern slavery and human rights appearing in the UK, France, the Netherlands and Australia, the research shows that top sourcing locations in the emerging markets should, however, remain firmly on the radar of companies.

Despite being rated as ‘extreme risk’ in the part of the index measuring the severity and frequency of slavery violations, India and Thailand, have nevertheless shown improvements in their scores, due to better efforts to enforce slavery related laws.

India has improved more than any other country – going from 15th worst to 49th in the overall index. Thailand’s action on enforcing a national programme to eliminate slavery and trafficking, meanwhile, has moved it 21 places up the ranking to 48th highest risk.

We stresse that slavery in both countries remains a significant problem. In India, severe forms of slavery are common in construction, brick kilns, garment production, manufacturing and farming; while in Thailand, the worst abuses still frequently occur in sectors such as manufacturing, agriculture, fishing and rubber production. Hannah Broscombe, Asia Supply Chain Analyst believes, “Intensive government activity will be required in India and Thailand if these green shoots of progress are to turn into a positive trajectory.”

The Modern Slavery Index 2017 (MSI) assesses the risk to business of exposure to practices of slavery, servitude, trafficking in persons and forced labour. The index is specifically designed to help companies identify where the risk of modern slavery and labour exploitation is greatest across their business and supply chain in order to better protect workers and comply with new and emerging legislation. The MSI forms part of our Human Rights Data Set, which features 31 risk indices covering civil and political rights, labour rights, human security, remedy, and development issues.