Venezuela’s de facto president, Nicolás Maduro, has emerged strengthened from a failed rebellion by his challenger, Juan Guaidó, on 30 April.

Maduro will double down on tried and tested tactics

Maduro now has an opportunity to arrest Guaidó and his co-conspirators. This would be highly inflammatory, given the strong US backing for the Venezuelan opposition leader.

From Maduro’s perspective, it might be better to simply dismiss Guaidó as a mere nuisance and a US stooge, thereby undermining Guaidó’s faltering movement and - once again - splintering the fractious Venezuelan opposition. Certainly, this tactic has proven its worth time and time again for both Maduro and his predecessor Hugo Chávez (1999-2013). Guaidó’s leadership undoubtedly will be questioned from within - amid rumours that, once again, he jump-started his action yesterday without the full knowledge of other opposition figures. On some accounts, this was because he feared imminent arrest.

US and Venezuelan opposition caught short in busted flush

The defensive US government response yesterday - most notably by alleging the direct involvement of three top officials, including the head of the armed forces - in Juan Guaidó’s efforts to remove Maduro, also backfired, and will only tie these officials closer to Maduro.

The military chief Vladimir Padrino López, who doubles as defence minister, will continue to re-iterate his loyalty to the Constitution, and for good measure, fealty to Maduro. None of the other military top brass said or did anything during the attempted uprising, and despite dozens of injuries in Caracas, and reports of sporadic unrest in other cities, Maduro did not deploy soldiers or heavy military machinery at any point, in Caracas or elsewhere.

Arguably, his continued reliance on the special police force (FAES), sections of the military police (GNB) and the armed militant government supporters known as ‘collectives’ evidences concern in the leadership that the rank and file are not on board - as Juan Guaidó continues to insist.

Either way, the seditious officers will be dealt with harshly, while Maduro has brought back a known hardliner to head up the national intelligence agency (Sebin) - amid clear signs of an internal fracture in the Sebin yesterday.

From an unknown location last night, Guaidó insisted that ‘Operation Freedom’ continues apace, and he reiterated calls for massive May Day demonstrations against the Maduro regime.

With an effective communications blackout in place, and rolling electricity blackouts, it is not clear that these calls will even be heard outside of the capital. We anticipate that the regime will allow demonstrators to 'let off steam', without overt repression.

The exit from the scene of Juan Guaidó’s party leader and mentor, Leopoldo López, who yesterday morning made a dramatic appearance alongside Guaidó, saying he had been freed from his longstanding house arrest by the Sebin officers assigned to guard him - will be a blow to morale on the ground today. López's decision yesterday evening to seek refuge in the Spanish embassy marked a clear turning point; thereafter the Caracas protests lost momentum.

The stick and carrot approach to Maduro - asphyxiating US sanctions and EU/regional diplomacy - is not working, because it is proving contradictory and even at cross purposes. As of this moment, we see less incentive than before for regime factions to defect.

Maduro dug-in for now, as Russia and US circle the table

Our Government Stability Index projection to end-2019 actually sees a marginal improvement in the country’s existing extreme risk score. The movement of this dynamic index - which assesses the stability of executive authority and the potential for an unexpected interruption - is in line with our January 2019 forecast that Maduro would dig in for the long haul, in complete defiance of intense domestic and external pressure.

For citizens and businesses alike, the domestic social, economic and security situation will remain dire, and a continued overspill into neighouring countries, particularly Colombia, is certain. 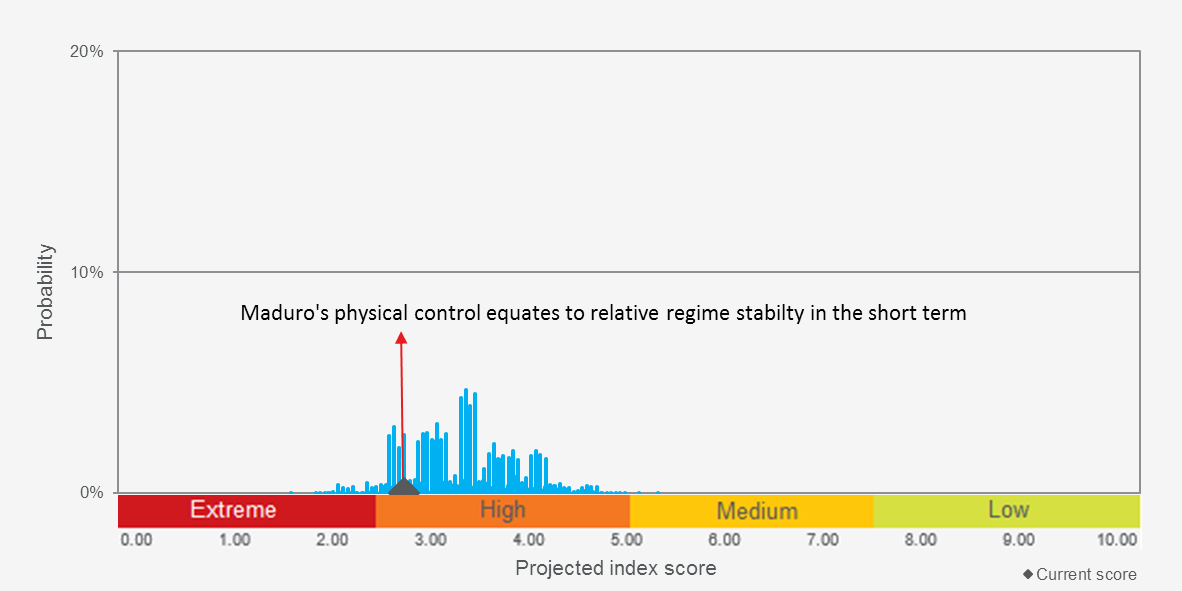 The diverging paths of revolutionary allies: Ecuador and Venezuela