The economic and political fallout sparked by the pandemic and Russia’s invasion of Ukraine continues to roil country ESG performance, according to the 2022-Q3 Ratings Readout from our Sovereign ESG Ratings. Political turmoil in Sri Lanka saw it register the biggest headline score decline this quarter, but other countries that registered a deterioration include Tajikistan and Saudi Arabia – all linked to worsening governance amid mounting geopolitical and macroeconomic pressures.

Sri Lanka’s major decline this quarter is, of course, a result of its political situation, even though the Ratings were updated before angry protestors stormed President Gotabaya Rajapaksa’s residence and forced him to resign. The sovereign’s Governance score plunged from 55/100 to 29/100.

This was driven by the ‘Sources of Instability’ dimension of the Ratings, where the country crossed a tipping point to move decisively into the weak performance cluster, reflecting the ongoing turmoil. The result is that Sri Lanka is now rated just ‘2’ on our Sovereign ESG model, below the Asia average, with its E2+, S2+ and G2 ratings all firmly towards the bottom of our 15-notch scale.

Tajikistan was the second-worst performer in the dataset this quarter, as evidenced by its headline ESG Score falling by three points to 34/100 for a headline Sovereign ESG Rating of 2+. As with Sri Lanka, increasing political risk in the shape of a 19-point deterioration in the country’s already-low Governance score is to blame, driven by violent clashes between social protestors and security forces in Tajikistan’s Gorno-Badakhshan region (GBAO), home to a large Pamiri population. Consequently, the Russia-dependent sovereign now has a Governance score of just 10/100 and a rating of G1, one notch above the worst possible outcome.

Meanwhile, Saudi Arabia registered a two-point decline in its headline score in Q3, driven by a six-point deterioration on the Governance pillar. Again, the negative drivers are in the Sources of Instability dimension, with the risk of both civil unrest and terrorism increasing. Protests in the previously restive Eastern Province have been virtually eradicated through a heavy-handed security response, but the risk of unrest is increasing in line with the global trend driven by rising food and fuel prices. Although high oil revenues make it easier for the Saudi government to mitigate socioeconomic risks through subsidies and price caps, the threat of unrest in the Eastern Province persists. Similarly, although the current Houthi ceasefire in Yemen has reduced the number of missile and drone attacks, the high number of attacks in early 2022 negatively impacts Saudi Arabia’s performance on the Terrorism Risk Index.

Algeria’s headline sovereign ESG score climbed four points in Q3 up to 33/100 – the largest improvement registered by any country this quarter – thanks to a double-digit improvement in its Governance score to 15/100. There was also a five-point uptick in the county’s Social pillar score to 39/100, reflecting an improving labour and general human rights situation post-pandemic. Clearly, however, these remain very weak scores overall, and the sovereign’s overall ratings were unchanged at headline and pillar levels.

Elsewhere, Slovakia, already one of the better performers within the Ratings, saw a moderate two-point uptick in its headline score this quarter to 84/100 and a rating of 5-. This was driven by an uptick on the Social pillar on the back of improving labour and human rights scores. At the same time, the country remains at risk of continuing social and political unrest over post-pandemic economic pressures, and the external effects of the war in neighbouring Ukraine, including an influx of refugees – and an early snap election in the run-up to 2023 is still possible.

Looking ahead: watch the Environment pillar ahead of COP-27

With global food and energy insecurity spreading, and recession/stagflation already evident in the US and Western Europe, with inevitable negative impacts for EMs, we expect pressure on sovereign ESG scores to persist to year-end and into 2023, with even developed country governments struggling to keep a lid on social demands. 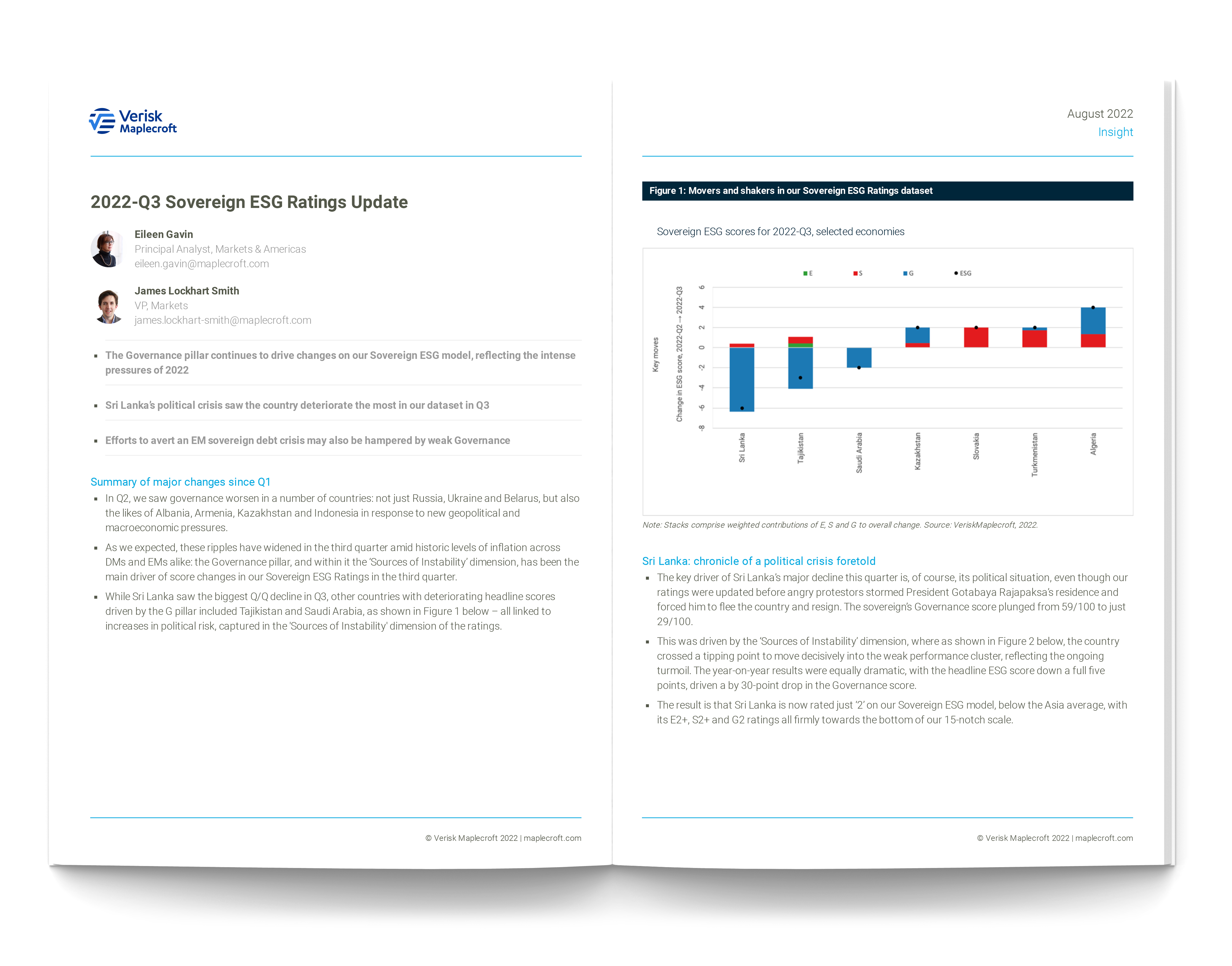