A total of 30 countries have witnessed a significant increase in resource nationalism risks over the last year, including 21 major producers of oil, gas and minerals.

Our Resource Nationalism Index (RNI) – which measures the risk of expropriation, the imposition of more stringent fiscal regimes, and pressure for companies to source goods and services from local providers – names the Democratic Republic of Congo (DRC) and Russia as two notable movers on the list. Both have been downgraded to ‘extreme risk’ in the ranking of 198 countries and join a group of eight nations where the risks to business from governments taking greater control of natural resources is highest.

It’s long been recognised by the extractives sector that outright expropriation is less of a risk than it used to be, and this is confirmed by the research. We've identified indirect forms of resource nationalism – including increasing tax pressures, changing contractual terms, and stronger local content requirements – as the most common issues driving a country’s risk environment, alongside a worsening of the regulatory climate.

Regionally, Africa is home to 10 countries experiencing a growth in these risks, including Tanzania (3rd highest risk), Zambia (17th) Gabon (23rd) and Equatorial Guinea (40th). But host governments are using such measures to wrestle revenues away from oil, gas and mining operators across the continents. India (15th), Malaysia (30th), Turkey (36th), Iraq (42nd) and Mexico (68th) are among major producing countries that have also seen their scores in the Resource Nationalism index deteriorate. 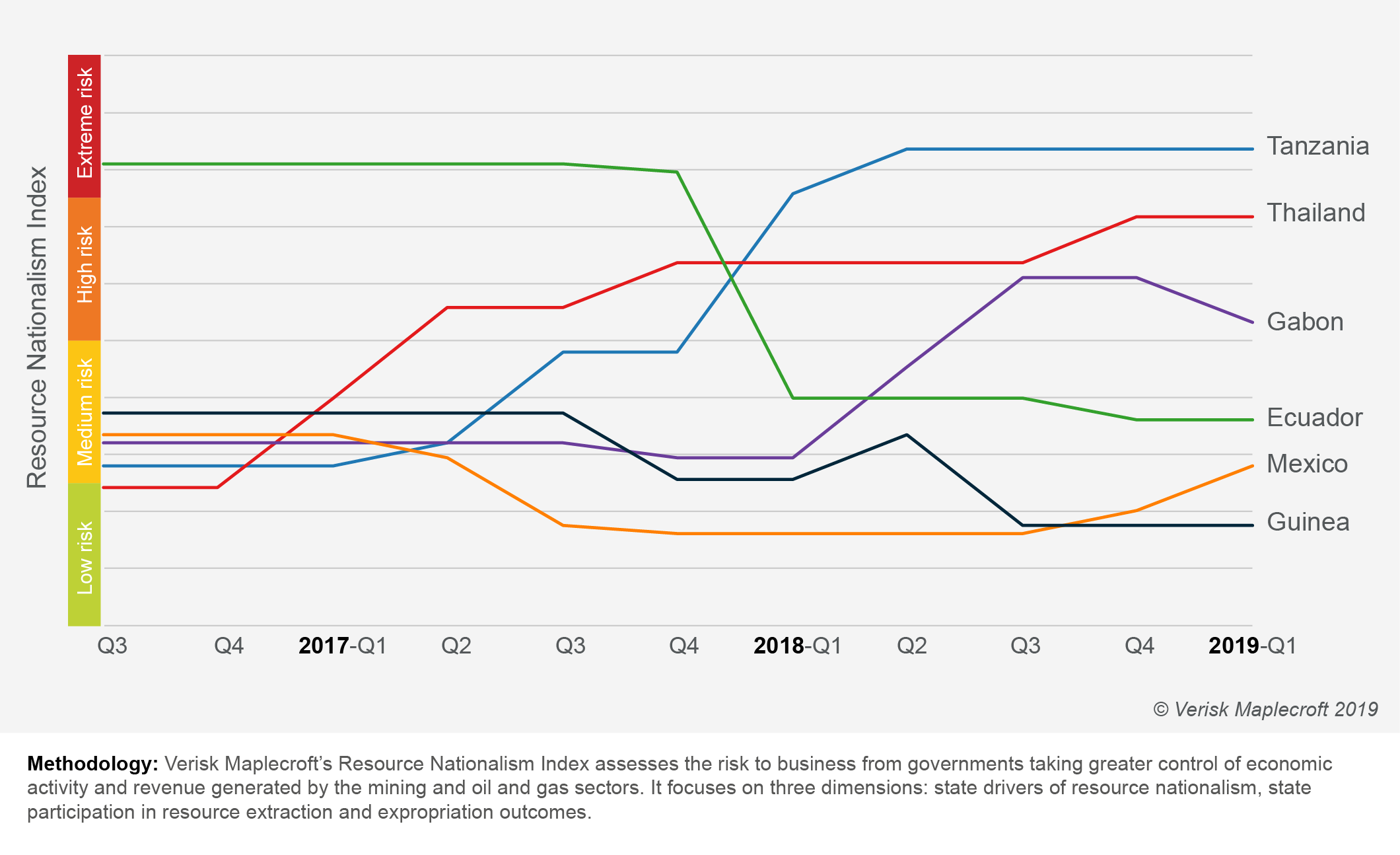 Expropriation is not entirely off the menu in all countries though. Russia and Venezuela are rated among the highest risk in this regard. That said, the well-recognised risks associated with both jurisdictions (including political instability, high levels of government interference and international sanctions) means foreign companies already have limited footprints there.

When it comes to squeezing investors, DRC is an extreme case in point. The country’s downgrade from 6th highest risk in the resource nationalism index to joint 1st was precipitated by its new Mining Code, which imposed onerous fiscal terms on existing operators and allows heightened levels of government interventionism in the sector. Since June 2018, when the code came into law, the government has attempted to block commercial asset transfers, tried to usurp operators to glean more profit, and choked exports from a cobalt mine.

The new president, while seemingly a change from the old guard of President Kabila, will not represent a significant departure from the status quo for mining regulation.

In fact, the government is likely to include copper as a ‘strategic’ substance that will be subject to the punitive 10% royalties currently levied on coltan, germanium and cobalt. With events moving fast in the country, we could see this come into force in 2019.

On the upside, 24 countries have seen a significant improvement in their performance in the RNI, including Zimbabwe (joint 5th), Vietnam (25th), Ecuador (46th) and Guinea (94th).

Although Zimbabwe has a long way to go to become a stable investment destination, the Resource Nationalism Index suggests it could be on the right trajectory. Since he came to power, President Emmerson Mnangagwa has actively courted foreign investment, and two cabinet ministers have pledged to remove indigenisation laws for foreign diamond and platinum miners. If parliament and Mnangagwa were to endorse these changes, Zimbabwe could climb out of the ‘extreme risk’ category of the Resource Nationalism index for the first time.

Given the country is home to the world’s second largest reserves of platinum and chromium, alongside major deposits of gold, diamonds and iron ore, its potential could be enormous if it manages to start attracting meaningful foreign investment.

Other countries, including OPEC member Ecuador, have made more significant progress. Since President Lenín Moreno came to power in 2017, he has transitioned the government away from the authoritarian left-wing policies of his predecessor, Rafael Correa, towards a more moderate and consensual centre-left administration. Moreno has introduced changes that strengthen democratic norms, restore powers to government institutions and tackle a legacy of systemic corruption. As a result, Ecuador has jumped from ranking 3rd and ‘extreme risk’ in the Resource Nationalism Index two years ago to 46th and ‘medium risk’ in 2019.