Qatar among 11 countries downgraded to ‘extreme risk’ for working conditions

Qatar is among 11 countries to be downgraded to ‘extreme risk’ for working conditions, partly due to reports of hazardous and sometimes deadly conditions experienced by migrant workers on construction sites for the 2022 World Cup, according to our new global index. Brazil, host of the 2014 competition, meanwhile, has made significant improvements to its working conditions over the last year and climbs 19 places in the ranking.

The number of countries rated as ‘extreme risk’ in our 7th annual Working Conditions Index (WCI), which evaluates 197 countries on their minimum wage levels, working hours, and health and safety in the workplace, rose over 20%, from 49 to 60, between 2013 and 2014. This signifies a worsening global landscape for workers, especially migrants, relating to wider labour related issues, including trafficking and forced and bonded labour.

Of the 11 countries that fell from ‘high’ to ‘extreme risk’ in the Index, Nigeria saw the biggest increase in risk. Widespread health and safety violations and a minimum wage two-thirds below subsistence levels resulted in a fall from 77th to 44th in the ranking (where 1st is most at risk). Egypt dropped 29 places to 26th, Qatar went from 60th to 32rd and Yemen 72nd to 42nd.Comoros (39th),Madagascar (50th), Peru (54th), Kenya (55th), Tanzania (56th), Georgia (59th) and Bolivia (60th) fell between 17 and 8 places in the Index. 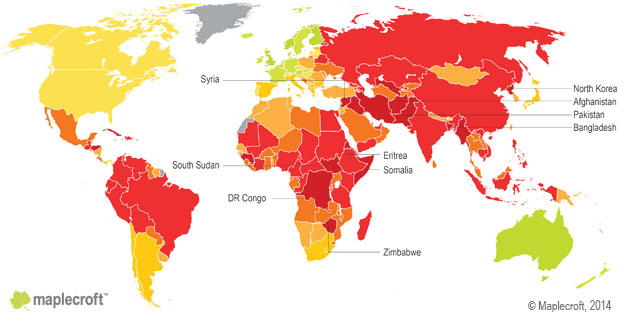 The decline of Qatar (60th) into the ‘extreme risk’ category of the Working Conditions Index highlights the potential reputational risks for companies working in the country. 185 Nepalese migrant workers are reported to have died in 2013 as a result of working conditions on projects for the 2022 world Cup, a figure which could rise significantly by the start of the competition. Allegations of forced labour in Qatar have increased, as scrutiny from the media and NGOs has intensified. Following an October 2013 visit to Qatar, the UN Special Rapporteur on the Human Rights of Migrants noted a lack of labour law enforcement and advised companies to undertake greater due diligence in monitoring worker conditions.

Conditions at World Cup and Olympics construction sites in Brazil (52nd) have also raised concerns, with tight deadlines impacting the scale and severity of violations. However, the number of labour inspectors has risen and the government has reacted firmly to incidents by imposing work suspensions, resulting in a rise of 19 places in the Index from 33rd last year. The country remains in the 'extreme risk' category though, alongside Russia (39th), host to the 2014 Sochi Winter Olympic Games, who’s ranking has remained stable.

“Deadly, but preventable, workplace tragedies have propelled working conditions into the 2013 headlines, resulting in wider scrutiny of business practices across many sectors and countries,” states Lizabeth Campbell. “In addition to the potential for reputational damage and supply chain disruptions, these disasters have prompted serious questions regarding corporate responsibility, which have forced this issue high up the risk register for many multinational companies.”

In 2013, nowhere were the risks posed by substandard working conditions more evident than in Bangladesh (5th). Occupational fatalities and excessive working hours in the country reveal a significant lack of capacity and political will to enforce labour laws, while a shortage of resources dedicated to health and safety and high levels of corruption leave many factory buildings structurally inadequate. This situation contributed to the collapse of the Rana Plaza factory on 24 April 2013, which caused 1,127 fatalities. International companies sourcing from the factory have been subject to extensive media criticism that they have tried to offset through a substantial short-term financial aid, pending a negotiated settlement with trade unions.

While the scale of the Rana Plaza tragedy was exceptional, industrial accidents and factory fires are commonplace in Bangladesh, meaning that the country’s risk score in the Working Conditions Index remains stable. The only countries to perform worse are Eritrea, North Korea, Syria and DR Congo.

The situation in Bangladesh is similar to many low cost sourcing countries across Southeast Asia, where health and safety standards in countries such as Indonesia (20th), Viet Nam (24th) and Cambodia (26th) remain extremely poor. Improvements due to political reforms have been noted in China, which climbed from 6th in 2009 to 37th in 2014, and Myanmar, from 1st in 2013 to 14th in 2014, but both remain in the ‘extreme risk’ category.

Our Working Conditions Index has been developed to enable multi-national companies to identify the reputational and operational risks arising from the prevalence and severity of sub-standard working conditions across the world. It forms part of the 2014 Human Rights Risk Atlas, which features a suite of indices analysing human rights and labour rights and protection across 197 countries. Labour rights and protection indices include: discrimination in the workplace; freedom of association and collective bargaining; trafficking in persons; child labour; forced labour; health and safety; homeworking; migrant workers; and vulnerable workers.