As the most important metal in lithium-ion batteries used to power EVs, nickel is set to play a vital role in the world’s low-carbon future. But what nickel gives with one hand, it takes away with the other: nickel production comes at an environmental cost that threatens to undercut its own clean energy credentials. Companies reliant on this metal must acknowledge their exposure to environmental risks and take the necessary preventative measures.

Global nickel deposits come in two types of ore, sulphides and laterites. Sulphides are higher grade and extracted using conventional techniques, while laterites are lower grade and must be extracted through more complex, open-pit mining techniques to remove large volumes of water before refining.

Historically, most nickel has come from sulphides for these reasons. But given the increasing demand for the metal, a trend that is set to continue, more and more nickel will come from laterite deposits. Figure 1 shows that global nickel production in 2017 was dominated by laterite-rich countries in the tropics, with Indonesia and the Philippines together making up over 40%. Production in these countries has accelerated in recent years and they will continue to feed a large portion of global nickel supply for the foreseeable future.

Global nickel production in 2017 was dominated by Indonesia and the Philippines, countries rich in laterite ore 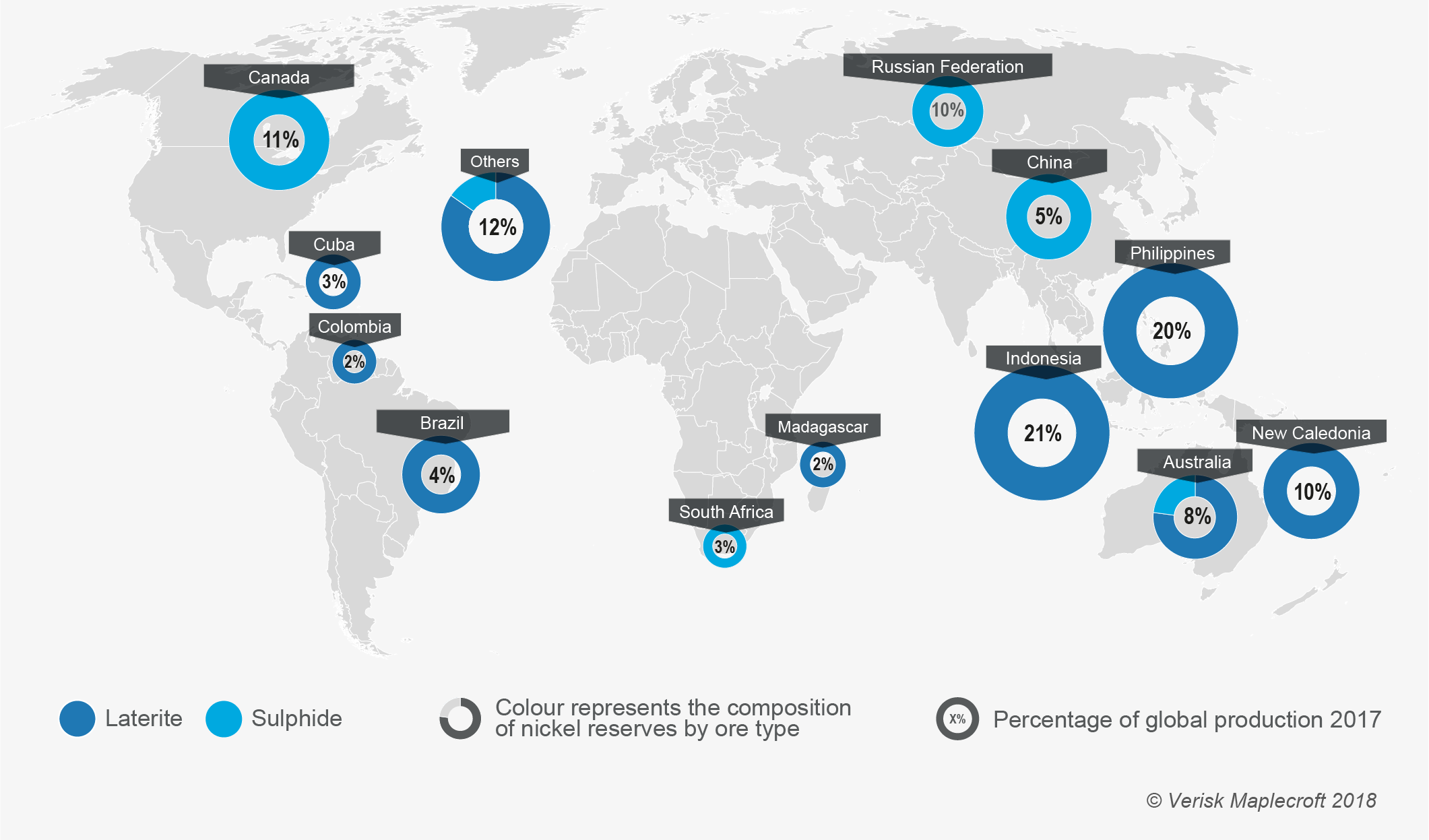 Global nickel production in 2017 was dominated by Indonesia and the Philippines, countries rich in laterite ore

The problem for business is that the production of laterite-derived nickel is not only more costly than for sulphides, but it also brings a suite of additional environmental concerns since the intensive processing uses more energy, pollutes more water and has a greater negative impact on biodiversity.

To assess the scale of the sustainability challenge, we first examined the energy requirements for the production of each ore based on current techniques. As shown in Figure 2, the production of nickel laterites uses far more energy than the production of sulphides. Some of the least efficient operations are found in Brazil, Indonesia and Guatemala, where vast amounts of energy are consumed during mining, drying, acid leaching and refining.

Water use is another critical consideration on the radar of investors when assessing the environmental impacts of mining. The sheer scale of laterite deposits means that extracting the ore produces more wastewater than when mining sulphides. Laterite production also requires acid leaching, consuming chemicals such as sulphuric acid and ammonia and increasing the threat to surrounding water quality.

In the Philippines, we can already witness these risks materialising. The government crackdown on the mining sector stems from environmental impacts, and most recently President Duterte has threatened to ban open-pit mining entirely - which would have severe consequences for nickel producers. Companies have been accused of polluting rivers, wells and farmland, the effects of which have been exacerbated by water scarcity in these areas. Indeed, on a global scale, laterite reserves are disproportionately located in countries that are high or extreme risk in our Water Stress Index (see Figure 3).

The subnational Water Stress Index quantifies risk by calculating the ratio of water supply to demand. Our data shows that 35% of nickel reserves (26% of which are laterites) are in locations exposed to high or extreme levels of water stress.

In addition to heightened energy and water concerns, laterite operations present significant threats to areas of high biodiversity. Nickel is a toxic element which, when released in effluent, often occurs in higher concentrations than normal background levels and therefore poses a severe threat to ecosystems.

As Figure 4 below shows, 39% of global nickel reserves – made up entirely of laterites – are found in locations exposed to high or extreme biodiversity risks. Our Biodiversity and Protected Areas (Terrestrial) Index captures the risk to business based on the level of species richness and the presence of protected areas. Once again, operations in Indonesia and the Philippines are some of the worst-performing countries. Conversely, sulphide ores are almost entirely low risk, since deposits are mostly found in higher latitude and less biodiverse areas, like Russia, Australia and Canada.

The rise in nickel production from laterite ores presents emerging sources of risk for battery, steel and automobile manufactures – and a new blind spot for investors. Companies in these industries will be expected to ensure greater transparency when sourcing raw materials such as nickel, and to roll out extensive product re-collection and recycling schemes to mitigate environmental risk exposure. Best practices for the sourcing of such materials include actively engaging with suppliers as far back as tier 3, while effective engagement might include ensuring adequate measures are in place to improve water and energy efficiency.