Land lies at the heart of Myanmar’s human rights risks

Businesses sourcing from Myanmar should not think that steering clear of Rakhine State means they can circumvent the risk of association with the most serious human rights violations. According to our data, companies sourcing from land-intensive industries such as agriculture, mining and logging are running a high risk of association with human rights abuses across the country.

Land-based industries account for 40% of Myanmar’s overall exports, worth USD5 billion per year. They are therefore a hugely attractive incentive for corrupt elements within the military to undertake land grabs, which can lead to the arbitrary arrest, torture or even extrajudicial killings of those who resist. The risks to workers in company supply chains are particularly high in areas affected by conflict, such as Kachin and Shan in northern Myanmar.

Myanmar performs very poorly in our Land, Property and Housing Rights Index overall, but in the aspect of the index that measures violations – including land grabs and property seizures – the country is rated 0 out of 10, which is the worst possible score.

To highlight how this score relates to specific products, we have adjusted the risk scores to indicate the 12 industries with the highest risk of being associated with violations of land rights perpetrated by the army. Products associated with these land-intensive industries range from staples like rice to raw sugar and precious stones such as jade. Farmland is particularly vulnerable to land seizures. Over 30,000 cases have been submitted to the Farmland Investigation Commission by people seeking compensation for forced eviction. Any businesses sourcing land-intensive goods from Myanmar should act to ensure they are not associated with this pervasive issue, including those sourcing from outside conflict zones. 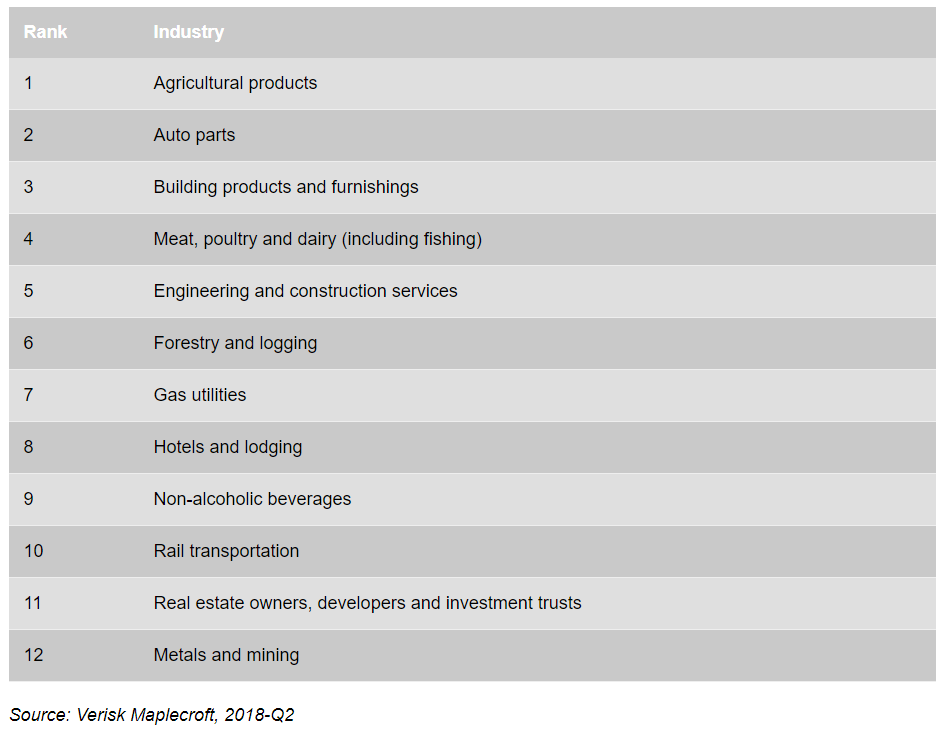 The extent of the abuses committed by the police, army and intelligence services is revealed in our Security Forces and Human Rights Index, in which Myanmar is rated as the 10th highest risk country; the only Asian country to perform worse is North Korea, ranked 1st. The country’s performance in our Corruption Index, in which it is the joint worst performer globally for the frequency and severity of corruption, is equally revealing. It shows how corruption is a key component of this story, with the army playing the leading role.

Myanmar is the highest risk country in the region for exposure to violations by security forces, corruption and land rights issues

Myanmar is the highest risk country in the region for exposure to violations by security forces, corruption and land rights issues

Despite the façade of democracy, corruption is entrenched among the governing military elite and allows them to enrich themselves through the exploitation of appropriated land. And they are able to do this thanks to the help of the security forces, where corruption is also endemic, and which is able to act with impunity.

Definitive numbers are difficult to come by, but reports of land grabs by the military are common. When faced by resistance from landowners, the army does not hesitate to exploit the country’s flawed legislative framework to remove them, if necessary by force.

Myanmar’s legal protections for landholders are amongst the weakest in the world according to our Land, Property and Housing Rights Index. According to Freedom House, anyone who challenges their evictions through official channels is unlikely to succeed – only 4% of cases for compensation made by victims of land seizures were successful according to the most recent information. There is even evidence that state officials tasked with handling land disputes are themselves involved in land seizures.

We believe that companies should be extremely wary about sourcing from land-intensive industries in Myanmar. Our indices reflect the dangerous combination of insecure land rights, corruption and a military acting above the law. Businesses already sourcing from suppliers in land-based industries should be on high alert for potential abuses against workers in their suppliers and ensure that there are no links to land rights violations. Not only could this result in significant reputational damage for businesses, but they also risk perpetuating the type of abuses we have witnessed in Rakhine State.