Saudi Arabia faces a tough balancing act. Diversification efforts have not amounted to much, and to balance its budget the kingdom needs much higher oil prices. But Saudi Arabia also needs to manage tense relations with Washington, which has responded negatively to talk of a cut. The Khashoggi case, which still hangs over the Saudi leadership, limits the country’s room for manoeuvre. Maintaining the unofficial oil pact with a Russia that is lukewarm about cuts is another hurdle that needs to be cleared.

Marrying these conflicting interests will be difficult, but not impossible. Given Saudi Arabia’s need to balance a host of conflicting interests, our basecase scenario is a de-facto Saudi-led cut with Russian participation, but a flexible agreement that shies away from specific targets.

Saudi-US relations hang in the balance

There is little doubt that the White House would respond negatively to a sharp OPEC cut. Still, Saudi Arabia is likely to calculate that with US midterm elections out of the way, Trump will pay less attention to OPEC and oil price movements more broadly. Clearly, the timing of OPEC’s allusions to a supply cut – the day after the US elections – was not a coincidence.

The Saudi authorities will be tempted to defy Washington. Undoubtedly, the Saudi leadership is very unhappy with the lack of warning from Washington that key importers of Iranian oil would be granted sanctions waivers. Trump’s decision to allow the flow of at least 1 million barrels per day from Iran until May is one of the key factors that point toward a cut in our forecast. 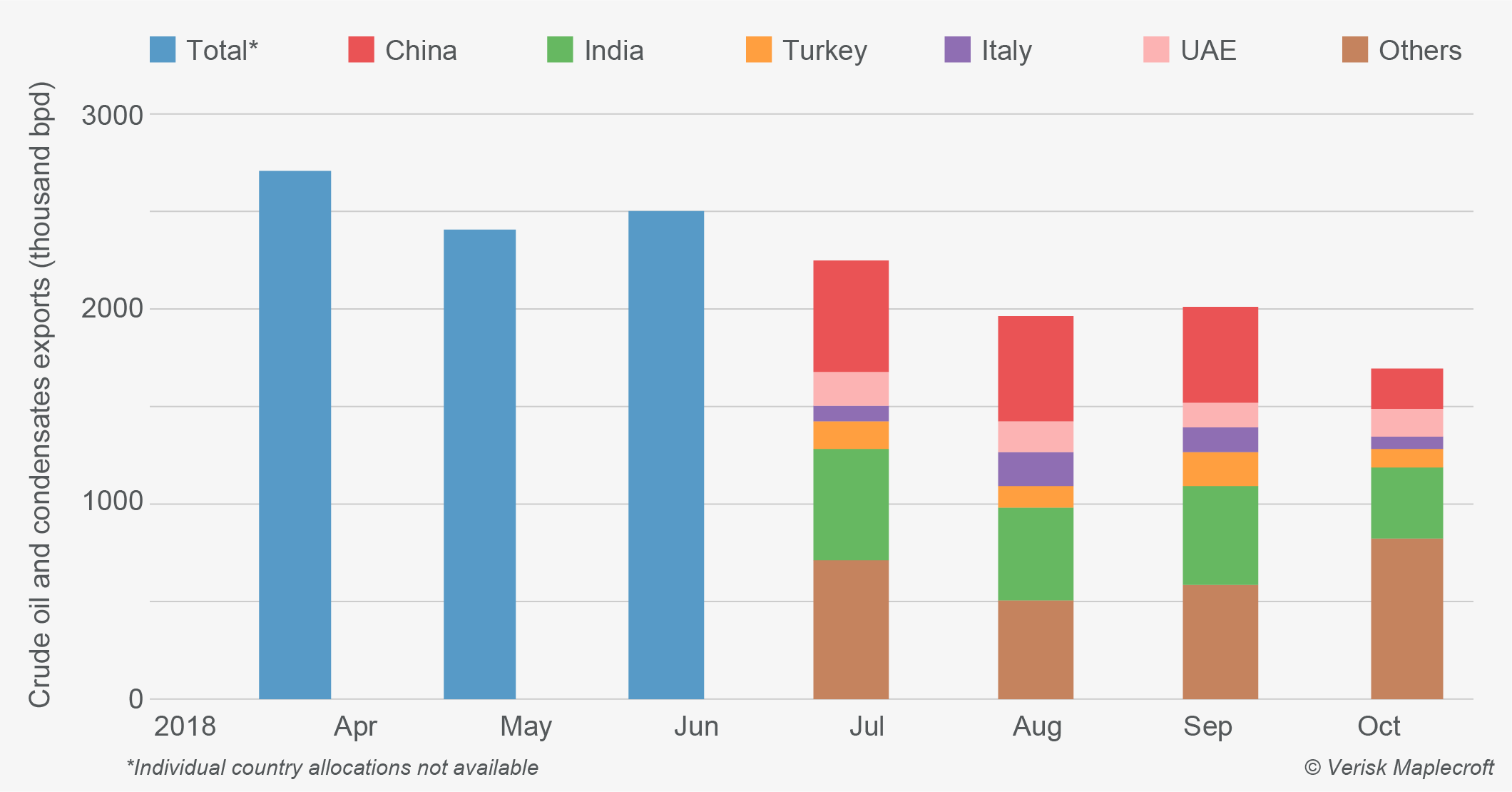 However, Saudi Arabia cannot discount the US position entirely.

Trump already has one eye on the presidential election in 2020 and preventing another oil price rally will be a key priority. More importantly, bipartisan scrutiny of the US-Saudi relationship is intensifying in Congress. A bipartisan congressional bill that would expose OPEC to US antitrust law failed to get off the ground during the Bush and Obama administrations. But given Trump’s repeated criticism of OPEC over the last year, the possibility of ‘NOPEC’ (No Oil Producing and Exporting Cartels) legislation gaining momentum is no longer remote.

As the chart below shows, the Khashoggi case has strained bilateral relations and risks causing lasting damage to the relationship. The US has already sanctioned 17 Saudi officials and the possibility of further action will weigh heavily on the minds of Saudi decision-makers as they prepare for OPEC talks in December.

Pushing for a sharp OPEC cut in the region of 1.5 million barrels per day or more would test relations with the Trump administration at a sensitive time in US-Saudi relations. This would risk putting wind in the sails of NOPEC supporters. A more cautious approach from Saudi Arabia is therefore probable. In practice, this will likely entail maintaining the flexibility allowed by the current OPEC agreement and avoiding explicit targets and individual country allocations.

For a supply cut agreement to be effective, Saudi Arabia needs Russia onboard. Combined, the two countries make up almost a quarter of global oil supply. If Saudi Arabia and OPEC want to counter rising US production and move the needle, they will need at least some cooperation from Russia.

So far, Russia has been much less enthusiastic about cutting supply than Saudi Arabia.

Unlike Saudi Arabia, which needs an oil price of at least USD80 per barrel to balance its budget, Russia can balance its budget as long as oil stays above USD50 per barrel. Saudi Arabia’s anger over Washington’s U-turn on Iran waivers nonetheless presents a strategic opportunity for Russia. Having stayed largely silent on the Khashoggi case, Moscow has an opportunity to strengthen relations with Riyadh further if it accommodates Saudi Arabia. An OPEC+ agreement led by Saudi Arabia and Russia that openly defies the US is unlikely; but we believe Riyadh has a good chance of securing the participation of Moscow in a flexible supply cut agreement.

For Saudi Arabia, striking the right oil supply agreement in December will not simply be a case of getting the balance of supply and demand right. While politics always looms large over OPEC meetings, the upcoming gathering is shaping up to be one of the most politically complex to date. This time, it will be less about internal OPEC disagreement and more about how Saudi Arabia manages shifting relations with the US and Russia.

Few doubt that Saudi production will come down over the coming months from the current all-time-high levels. However, the need to avoid a confrontation with the US over oil prices and maintain coordination with Russia will carry significant weight for Saudi Arabia.

Despite these restraining factors, a broader OPEC+ agreement to bring down production is within reach. An adaptable agreement that addresses immediate fears of over-supply without allocating specific country targets is a compromise that is likely to work for all parties. Another benefit of this approach is that it reduces the likelihood of another OPEC U-turn if the Trump administrations decides to not renew Iran waivers expiring in May. With around 1 million bpd of Iranian oil in the balance, a rigid OPEC agreement in the traditional mould risks quickly being overtaken by events in 2019.

Oil Price
The Most Likely Outcome Of The OPEC Meeting