When federal government troops launched military operations in the Tigray region of Ethiopia in November 2020, Prime Minister Abiy Ahmed was adamant that victory was imminent. A year-on, the Ethiopian capital of Addis Ababa faces military threats on multiple fronts as an alliance of rebel groups led by the Tigray People’s Liberation Front (TPLF) advances towards the city.

How the conflict plays out will have important ramifications for export-oriented industries, Ethiopia’s ESG profile, and the very future of Africa’s second most populous state.

The current conflict has its origins in the perennial challenge of maintaining national unity in a country riven by deep-seated ethnic rivalries and competing nationalist aspirations. Following the end of the civil war in 1991, Ethiopia was governed by the ethno-federalist Ethiopian People's Revolutionary Democratic Front (EPRDF) coalition, controlled by the TPLF. The EPRDF decentralised Ethiopia into a federation, where states were demarcated according to the majority ethnic groups within their boundaries. This led to a volatile system of ethnic winners and losers where majority groups dominate politics at the expense of minorities.

On assuming office in 2018, Prime Minister Abiy sought to stabilise the country by centralising political power in the federal government. As the primary beneficiaries of the old EPRDF system, the TPLF had the most to lose from these reforms, putting it on a direct collision course with Abiy.

Rebels are unlikely to seize the capital in the near future

Political tensions spilled over into conflict in November 2020. Although the Ethiopian military achieved a series of early successes, its control over Tigray State subsequently deteriorated, culminating in the forced withdrawal of pro-government forces in June 2021. The TPLF has since pressed its advantage, moving southwards through Amhara and Afar States towards the Ethiopian capital (see map below).

To bolster its political legitimacy and strengthen its military forces, the TPLF has built a coalition of nine anti-government groups under the ‘Ethiopian Federalist and Confederalist Forces’ (UFECEF) banner. However, the UFECEF is united by little beyond their opposition to Abiy and is likely to prove a fractious and short-lived arrangement.

The military momentum is currently with the rebels, but we do not expect the immediate collapse of the Ethiopian military nor the fall of the capital. The Ethiopian National Defense Force is regularly resupplied with military equipment by international allies from the Persian Gulf and likely retains the capacity to halt the rebel advance. Indeed, in our view, the UFECEF likely has little intention of assaulting the Ethiopian capital, as a static siege would neuter its main strength - its mobility. Our base case is that the TPLF-led rebels will continue to threaten Addis as a means to force Abiy to the negotiating table.

Ethiopia: Overview of the military situation in November 2021 - Rebel forces are threatening the capital on multiple fronts 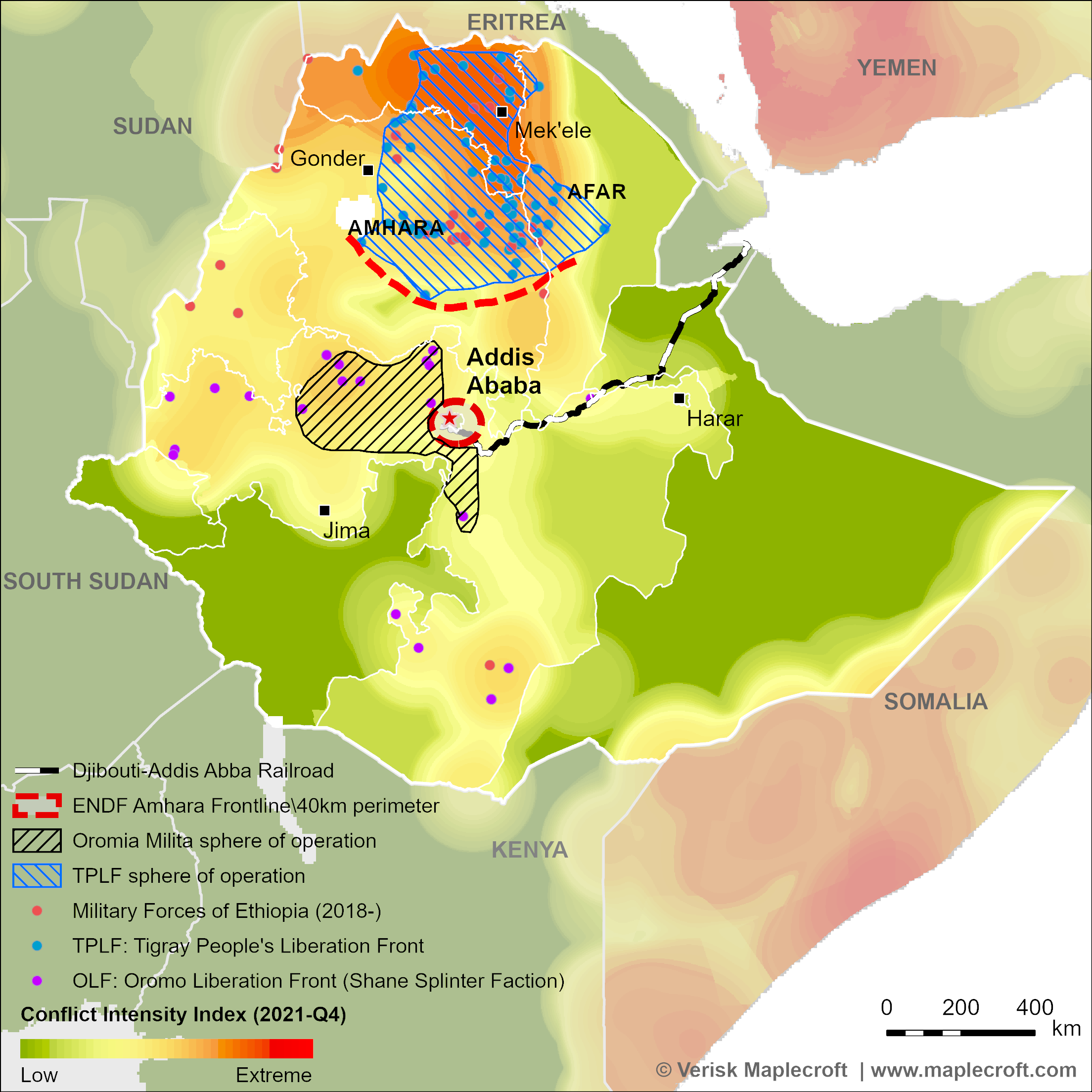 Ethiopia: Overview of the military situation in November 2021 - Rebel forces are threatening the capital on multiple fronts

Abiy no longer recognises the political legitimacy of the TPLF, having designated it a terrorist organisation in May 2021. This proscription is a major obstacle to a negotiated settlement. If Abiy continues to refuse to enter into talks with the TPLF, the sole option for both sides is a military solution that is likely to be bloody and protracted. However, a combination of fiscal pressures, mounting military losses and diplomatic isolation may well force Abiy to sit down with the UFECEF.

If peace negotiations were successful, it’s hard to see how Abiy could remain in power. He would most likely be succeeded by an ethnic Tigrayan and Oromo-dominated transitional administration amenable to nationalists seeking autonomy or secession. This would likely herald the end of a unified Ethiopian state within its modern borders. Tigray and Oromia would secure secession, and Southern Nations would quickly follow.

If the rebels were to take Addis by force, then the political transition would likely be even more chaotic. The government that emerged would lack the nationwide legitimacy to ensure a transition to ethnically hegemonic independent states did not spiral into ethnic cleansing. Such states would be at best fragile and at worst failed from the outset.

Consumer goods supply chains feeding Western markets are already feeling the impact of the fighting, as several multinational clothing companies have announced the suspension of their operations until further notice. But the situation may yet deteriorate further.

The TPLF and its allies will look to put pressure on the government to enter into negotiations by seeking to disrupt the flow of goods dependent on the country’s principal export route, the Addis-Djibouti railway and road network (see map above). If the rebels were to either seize or disrupt this transport corridor, the country’s export-orientated industries would find their only reliable export route cut-off.

Export-orientated manufacturers will also suffer as a result of losing tariff free access to the United States market from 1 January 2022. Ethiopia was suspended from the African Growth and Opportunity Act (AGOA) on 6 November 2021 in light of extensive human rights violations committed by state security forces throughout the conflict. The situation is reflected in Ethiopia’s deteriorating performance on our Security Forces and Human Rights Index over the past 12 months, which has seen the country move from the high risk to extreme risk category.