Amid much gloom elsewhere, 2020 could hardly have been a better year for renewables. Renewable energy capacity grew 45% in 2019, the fastest rate to date. The International Energy Agency revised forecasts upwards and now expects similar growth rates for the coming years, even prior to President Biden’s strengthened emissions targets and infrastructure proposals.

Yet, while renewables are undeniably central to a 2-degree scenario, the transition carries ESG risks.

A transition from fossil fuels to renewables will change employment patterns, and some countries are better placed than others to re-skill their workers for the green economy. Political instability and inequality are other risks to watch out for.

In the latest update to our forecast series on the direction of the energy transition in seven major emitters (the US, EU, China, India, Russia, Brazil, Australia), we continue to see a split picture. While most economies recognise the need to move away from fossil fuels, robust action is harder to achieve. One sign of governments’ hedging strategy is their simultaneous expansion of fossil fuel generation alongside renewables. As of May 2021, the governments of the countries in our forecast series have committed at least USD432.06 billion to energy sector pandemic recovery funding (we use France and Germany as a proxy for the EU). Of that, 37% has gone to clean energy (USD159.49 billion), trumped by 41% earmarked for fossil fuels (USD178.01 billion).

The probability of government action adding momentum to the energy transition, July 2020- May 2021 forecasts

The probability of government action adding momentum to the energy transition, July 2020- May 2021 forecasts

New forecast questions for the US, China, EU and India track government commitment to energy transition

New forecast questions for the US, China, EU and India track government commitment to energy transition

The energy transition will change labour markets alongside power generation. The positive impacts of the energy transition on employment include: a more gender-balanced workforce in the renewable sector (32% female workers in renewables industries worldwide, compared to 22% in conventional energy), and the potential for steadier employment patterns (given the greater stability of electricity prices compared to oil and gas prices). However, where these jobs will be focused depends on countries’ reskilling capacity: the ability to move from lower to high-skilled jobs.

India’s high-risk score in the re-skilling capacity assessment highlights existing labour market precariousness and shortcomings in the regulatory and education systems that will hamper the country’s ability to move from low to high-skilled jobs (see visual below). Our data also shows shortcomings in Brazil, China and Russia, and it is notable that only Australia falls into the low-risk category. While this arguably highlights the economic and social opportunity connected to the stronger climate ambition from Canberra, the medium-risk scores for the EU and US point to the wider challenges that even large developed democracies face.

In addition to structural and socio-economic challenges for reskilling workers, several of our forecast countries face political risks. The transition from a fossil-fuelled economy to one powered by green energy presents the greatest challenge for net-oil exporters. For them, the energy transition threatens their economic and governance model – which is why it is unsurprising that most oil-producing countries have become more dependent on hydrocarbon exports since the 2014 oil price crash.

Using a combination of net-oil exporters’ break-even costs, their capacity to diversify, and political resilience, we find that most of them are ill-positioned to face the energy transition (see visual below). While Algeria, Nigeria, Iraq and Chad are particularly vulnerable to political instability, Russia is among a number of countries next in line – explaining the Kremlin’s continued reliance on fossil fuels and unambitious climate targets. 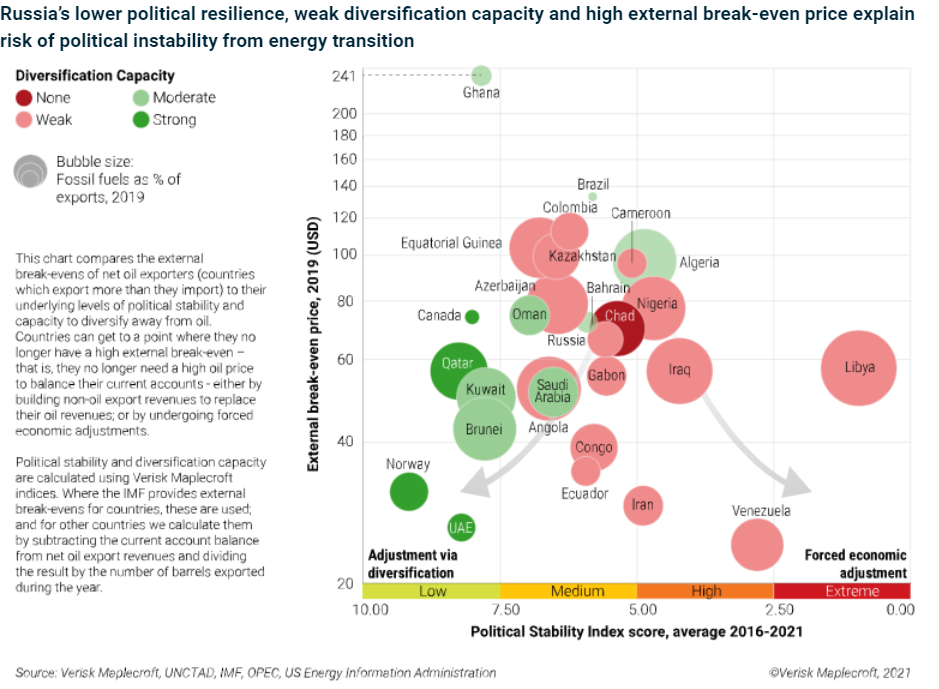 Coal, oil and natural gas account for 79% of global energy. Although there are 63 carbon pricing schemes in the world, they only cover 25% of emissions according to our sister company Wood Mackenzie. Not only does this highlight the limited sectoral focus of existing schemes, but the EU is also the only region with a price above USD40 per tonne of CO2. Among the major emitters in our series, the US, India, Russia and Brazil have no national schemes.

A sufficiently high carbon price could be an appropriate tool to disincentivise fossil fuel consumption and potentially support renewables expansion. However, the implementation of a carbon price and/or the transition away from subsidised fossil fuels risks sparking unrest in several countries. This is because fossil fuel taxes are often perceived as disproportionately impacting lower-income citizens. 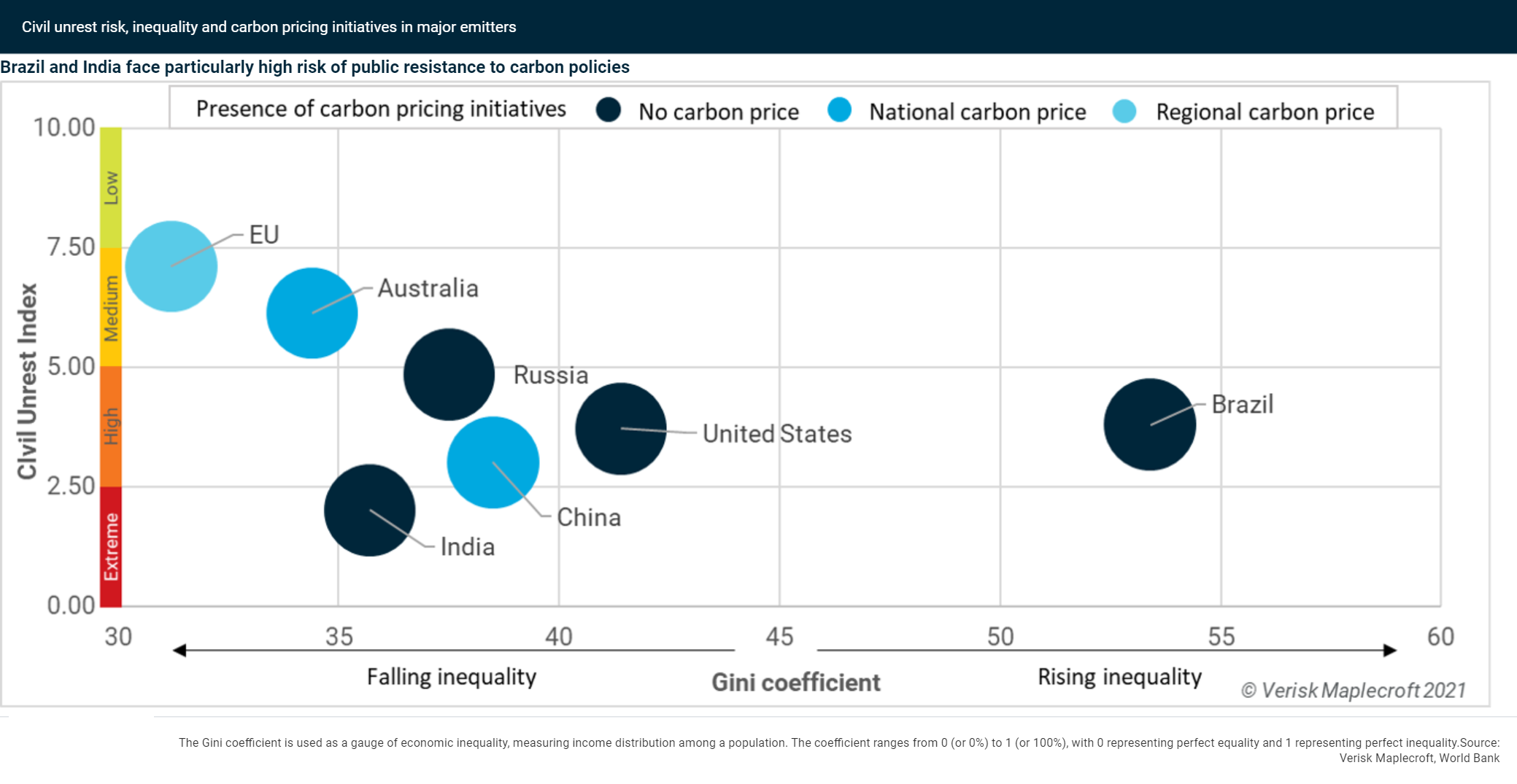 Brazil’s high inequality and high-risk score in our Civil Unrest Index (see visual above) puts it at greatest risk of disruptive public opposition to policy measures aimed at increasing the cost of fossil fuel consumption. As the country continues to reel from the pandemic’s impact on health and the economy, these factors will reinforce Bolsonaro’s resistance to greater climate action.

India’s extreme risk of civil unrest similarly helps to explain the absence of a carbon pricing scheme. In 2019 (latest data available), government subsidies for fossil fuels were seven times higher than those for renewables and EVs, a pattern restraining India’s energy transition.

While the lower rates of inequality and civil unrest in Australia and the EU support the existence of national and regional carbon pricing initiatives, the prospects of a successful implementation of a national scheme in the US are hampered by the latter’s higher inequality and civil unrest risk. Additionally, many renewables projects carry the same risks of dislocation and forced displacement as fossil fuel projects, presenting yet another civil unrest risk that governments need to face.

Renewables capacity is expanding, but in most major emitters, green energy is an ‘add-on’ as governments keep a strong focus on fossil fuels. We find that varying levels in countries’ reskilling capacity as well as risks of political instability and civil unrest help to explain the political resistance to a full-powered energy transition. India, Russia and Brazil are those emitters where social and governance risks are particularly obstructive. But it is a sign of the transformational character of the energy transition that all countries face significant challenges.