Recent market turmoil is just the tip of the iceberg for emerging economies, and pressure on these countries will intensify over the next couple of years as global financial conditions become less accommodating. In this environment, debt will be a key area of vulnerability – particularly for countries that have borrowed heavily in foreign currency in the post-crisis era.

In a research note from June we warned that the second half of 2018 would mark a turning point for emerging markets (EMs), following several years of strong growth and returns. Data from the last three months appear to confirm this trend. In August, emerging market stocks – as measured by the MSCI EM index – fell into bear market territory and GDP growth has seemingly plateaued.

As we enter the next leg down, there will be plenty of challenges for EMs to contend with. A more protectionist global backdrop poses an obvious threat to open and trade-dependent nations. However, the defining challenge will be tighter global monetary conditions as central banks in the advanced world shrink their balance sheets and move towards higher interest rates.

Against this backdrop, it is inevitable that EMs will witness an increase in capital outflows and further downside for their currencies. The good news is that current account imbalances have narrowed over the past five years or so, when fears about the impending impact of global monetary ‘normalisation’ first rattled markets. Put differently, fewer EMs are now living beyond their means.

By contrast, debt has the potential to be a more serious stumbling block for some countries. Our calculations show that 19 out of a sample of the 21 largest and most actively EMs have seen total debt rise as a share of GDP since 2010. Admittedly, in some places – such as China – most of this debt is denominated in local currency, and thus more insulated from external market dynamics.

Elsewhere, however, foreign currencies and in particular the US dollar have played a bigger role in overall borrowing. This pattern lends itself more readily to a ‘classic’ EM debt crisis, in which higher US interest rates and/or a weakening exchange rate drive up the cost of repaying obligations which are denominated in hard currency.

Of course, emerging markets are a diverse bunch and some are better equipped in a structural sense to shoulder high debt burdens than others. A quick look at the modern history of sovereign defaults proves this point. Accordingly, rather than simply looking at absolute levels of debt (as a share of GDP), we are equally, if not more, interested in the rate of change of the stock of debt. 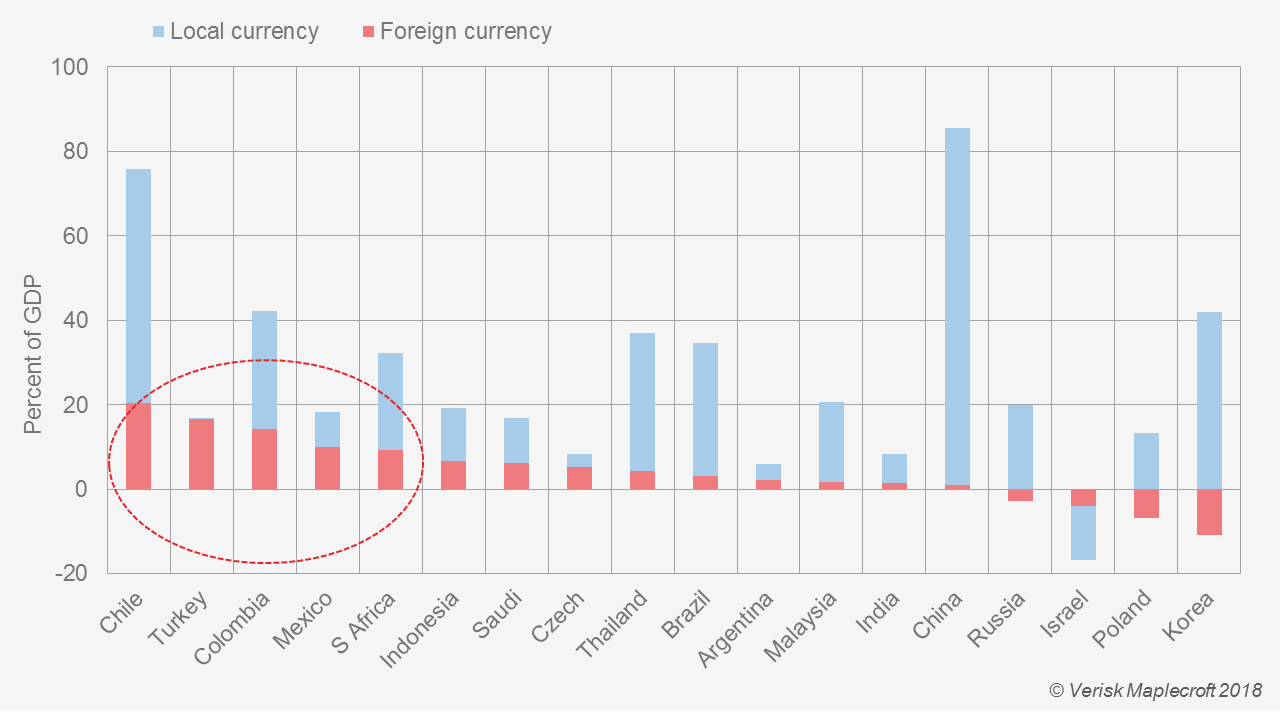 The chart above shows the change in the ratio of foreign and local currency debt to GDP in the post-global financial crisis era (i.e. since 2010). For the purposes of this analysis we use an increase in foreign currency debt of c. 10% of GDP or more as a red flag, or warning threshold. Using this metric, Chile, Turkey, Colombia, Mexico and South Africa look at highest risk of running into problems.

In these five economies, private companies account for the vast majority of borrowing in hard currency since 2010. Indeed, with the exception of Colombia – where new foreign currency debt is roughly evenly split between the public and private sectors – more than two-thirds of this figure has accrued to non-financial corporates. For Turkey and Mexico, the ratio is over 95%.

Nevertheless, this is just one side of the coin, and in the event that borrowers begin to encounter difficulties in servicing foreign currency debt, the overall state of investor confidence will be crucial. In this regard, macro factors including domestic politics and economic policy play an important role. The market risk pillar of our Dynamic Macroeconomic Index (DMI) is a useful proxy for market confidence. 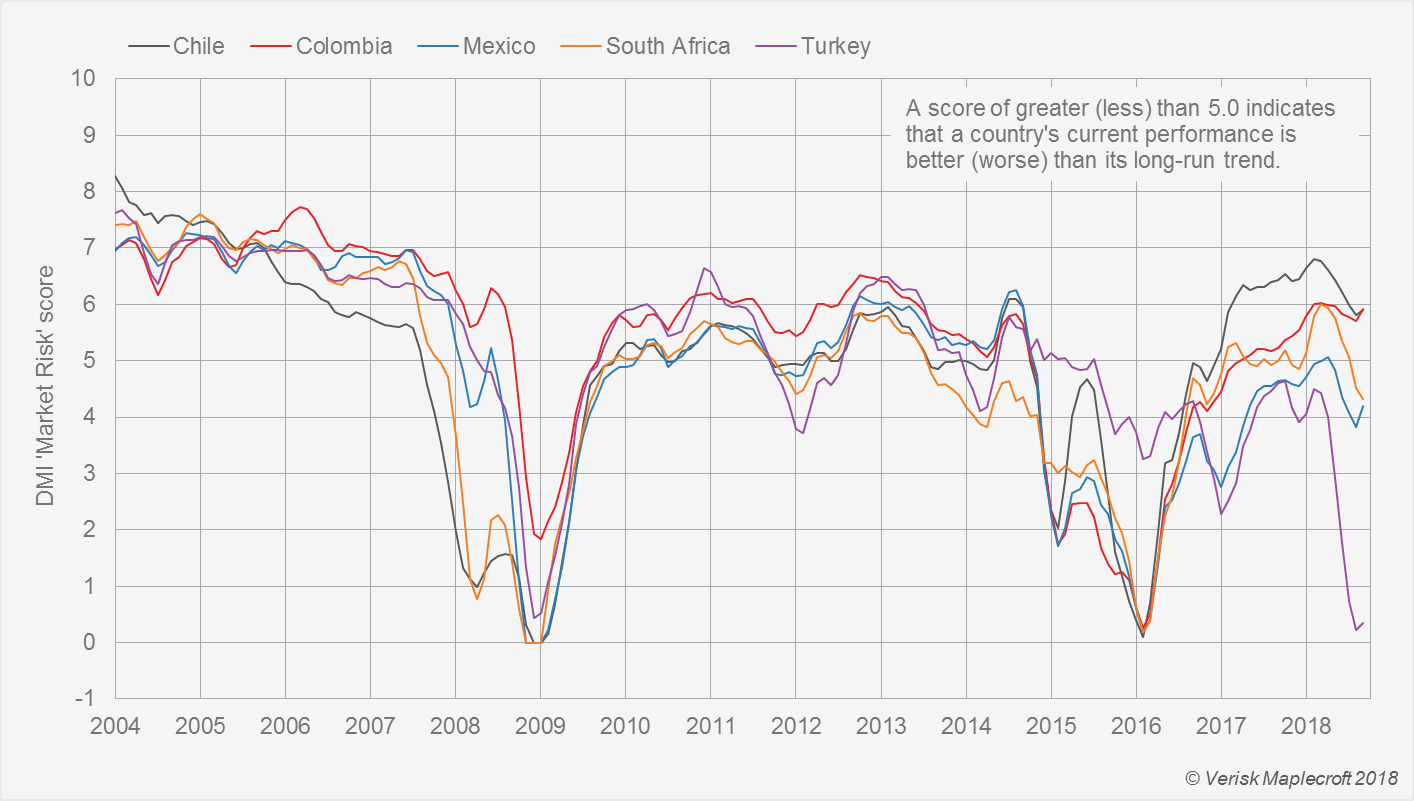 The DMI looks at market risk through the lens of a country’s bond spreads – in other words, the premium over US treasuries that investors demand in order to lend to the sovereign. On this basis, Turkey is currently the weakest link for investors, although Mexico and South Africa have also fallen below their long-run trend levels. By contrast, Chile and Colombia are doing somewhat better.

The bottom line is that some countries face a very real possibility of instability over the coming years due to difficulties in servicing hard currency debt. Although we don’t think that this is a systemic issue which will hit EMs indiscriminately, what is clear is that we are only just getting started on the next leg down for these countries, and things are likely to get worse before they get better.