Guangzhou and Dongguan, two major cities in China’s Pearl River Delta Economic Zone, have been identified as the metropolitan areas most vulnerable to sea level rise worldwide. The globally important manufacturing hub, which generates 20% of Chinese GDP, is just one of a host of Asian economic centres threatened by rising tides brought on by climate change, according to new research based on our Sea Level Rise Index.

Using this index to assess sea level rise exposure of 500 cities with million-plus populations reveals that 11 of the 15 most at-risk cities are in Asia. Aside from Guangzhou and Dongguan, some of the region’s most significant financial and trade centres – including Tokyo, Jakarta, Ho Chi Minh City and Shanghai – also feature on the list. Among the most prominent cities outside of Asia facing the highest risk are Dubai, Alexandria and New York.

While sea level rise is seen as a longer term problem, it needs to be considered today, as we know that the buildings, airports and power plants constructed in the coming years are still going to be standing in 50 years’ time when the effects will start to be felt. And with recent research suggesting rates of sea level rise are much higher than projected, bringing medium-term investment horizons into reach, the question governments and investors need to be asking is: which major cities are at risk of disappearing beneath the waves?

Figure 1: Asian cities are most exposed to risks from sea level rise

We know that the risks of sea level rise are accelerating. The Intergovernmental Panel on Climate Change (IPCC) reported last year that rates of sea level rise have reached 3.6mm per year and are speeding up. By 2100, we could experience seas between 30cm and 110cm higher, depending on global emissions. But as the world’s carbon footprint continues to swell in line with the IPCC’s high emission scenario (RCP8.5), a 60cm to 110cm rise is most likely.

Rising seas don’t just mean more frequent flooding, but also greater damage from storms, faster rates of erosion, and shrinking water resources if sea water infiltrates aquifers – not to mention the enormous cost of protecting or relocating populations, infrastructure and buildings, and the disruption to business operations and supply chains.

But it is low-lying, like all deltas, and even conservative sea level rise projections have serious implications for the region’s economy. Around a fifth of Guangzhou’s urban area is classified as high or extreme risk in the Sea Level Rise Index. There are over 3,000km of sea defences in the Pearl River Delta, but a 30cm rise in global sea level would overwhelm many of them. 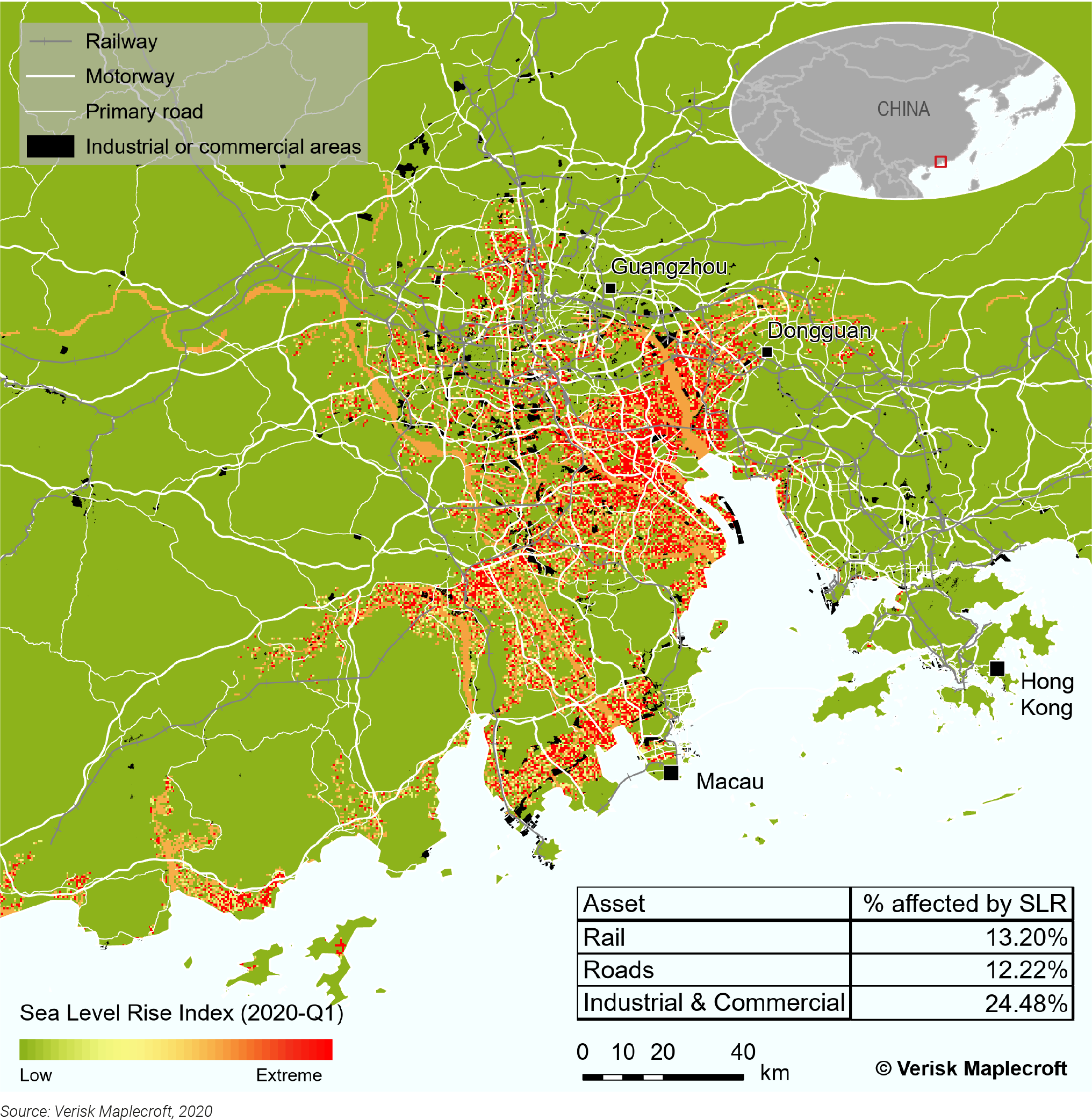 Coastal flooding in 1998 caused around USD20 billion in damage across the region. Rising sea levels will amplify that damage as flooding, typhoons, heavy rain and storm surges pound its cities more frequently. While Guangzhou is transitioning towards a more diverse economic mix, with a greater contribution from financial services, its core economic manufacturing activities are not easily relocated and have long investment cycles.

And Guangzhou’s situation is not atypical.

Across China USD348 billion of GDP and 7.8 million people are in areas at high and extreme risk of sea level rise in the coming century

This includes other major cities like Yancheng. Globally, over a quarter of the 29 million people directly threatened by sea level rises are in China.

Efforts to counter sea level rise will involve enormous public investment. In March 2019, New York (ranked the 14th highest risk city globally) announced USD10 billion of flood defence infrastructure spending. Over 20km2 of the city is classified as high or extreme rise in our index. However, this could just be a fraction of the USD120 billion that is estimated to be needed by 2100.

London, ranked 32nd in terms of city area classified as high or extreme risk in our index, is currently protected by the Thames Barrier, which was designed to cope with an 8mm per year rise in sea levels, a rate far above those currently observed. But under current projections a new barrier will be required before 2070, at an estimated cost of USD9 billion.

Meanwhile, Indonesia is taking the extraordinary step of moving its capital. Jakarta – the fourth highest risk city globally – generates almost a third of the country’s total GDP but is slowly sinking towards current sea level as the aquifers it sits above are drained. And in the Gulf, Dubai (ranked 8th) has swathes of vulnerable reclaimed land, where sea level rise will threaten the city-state’s hugely profitable tourism industry.

Many of these nations should have the ability to organise and finance resilience measures. But for at risk cities in India, North Africa and Southeast Asia the costs will be out of reach. Companies looking at longterm real asset investments, such as new infrastructure, power plants or data centres, will need to price in resilience measures or consider alternative options.

Out of our depth?

For lower income nations, reacting to rising sea levels will take time and investment, drawing funding away from other development priorities. Failing to prepare for sea level rise will also impact a country’s investment potential and credit risk, making it more difficult to fund much-needed projects.

The world is facing at least a one-metre rise in sea levels, but there is uncertainty over how quickly this will occur. Last year, a high-profile study suggested that the world is underestimating the rate and severity of sea level rise by a factor of three – potentially bringing the risks forward by two or three decades.

What is clear is that the window to stave off the worst impacts is closing, and yet investments remain well short of what is required. And, if rates of sea level rise are accelerating as many researchers have suggested, the extent of the problems we will face this coming century could be well beyond the means of even wealthy nations to cope with.

Discover this year’s Environmental Risk Outlook through its insights and webinars.