Chennai is India's fiifth largest city - and it's undergoing a water crisis. The four main reservoirs have become exhausted as dry weather and increasing demand takes a toll. With a long wait until the October - December monsoon season that provides around half of its total annual rainfall, will the situation deteriorate further?

Our subnational Water Stress Index ranks India as the 46th highest risk country in the world. But drilling down to the city level shows 11 of India’s 20 largest cities are extreme risk:

Seven other cities are also high risk for Water Stress. Our Water Stress Index measures water use by households, industry and agriculture, as well as available supplies from rivers, streams and lakes, to quantify pressure on those resources.

Chennai is a hotspot for IT and automotive businesses - all of which will need to make their own arrangements for water supply in light of the shortages. But maintaining business continuity will come at a cost.

Riots across the city triggered by the shortages and the prospect of months of expensive water from tankers also pose threats to business operations and supply chains.

Chennai residents will be dependent on expensive water provided from tankers by private vendors. Exorbitant pricing will further instigate protests in the city, fuelled by allegations that wealthier neighbourhoods are being given priority.

With Indian cities growing at a phenomenal rate, increasing demand for water will heap pressure on their diminishing water resources, making Chennai’s current plight a new normal for tens of millions of people. The UN estimates Greater Delhi’s population will grow from 28 million people to above 43 million by 2035, a 52% rise, while Chennai will grow 47% to top 15 million. The average population growth rate among the 11 extreme risk cities is 49% - more than 127 million people will call them home by 2035. 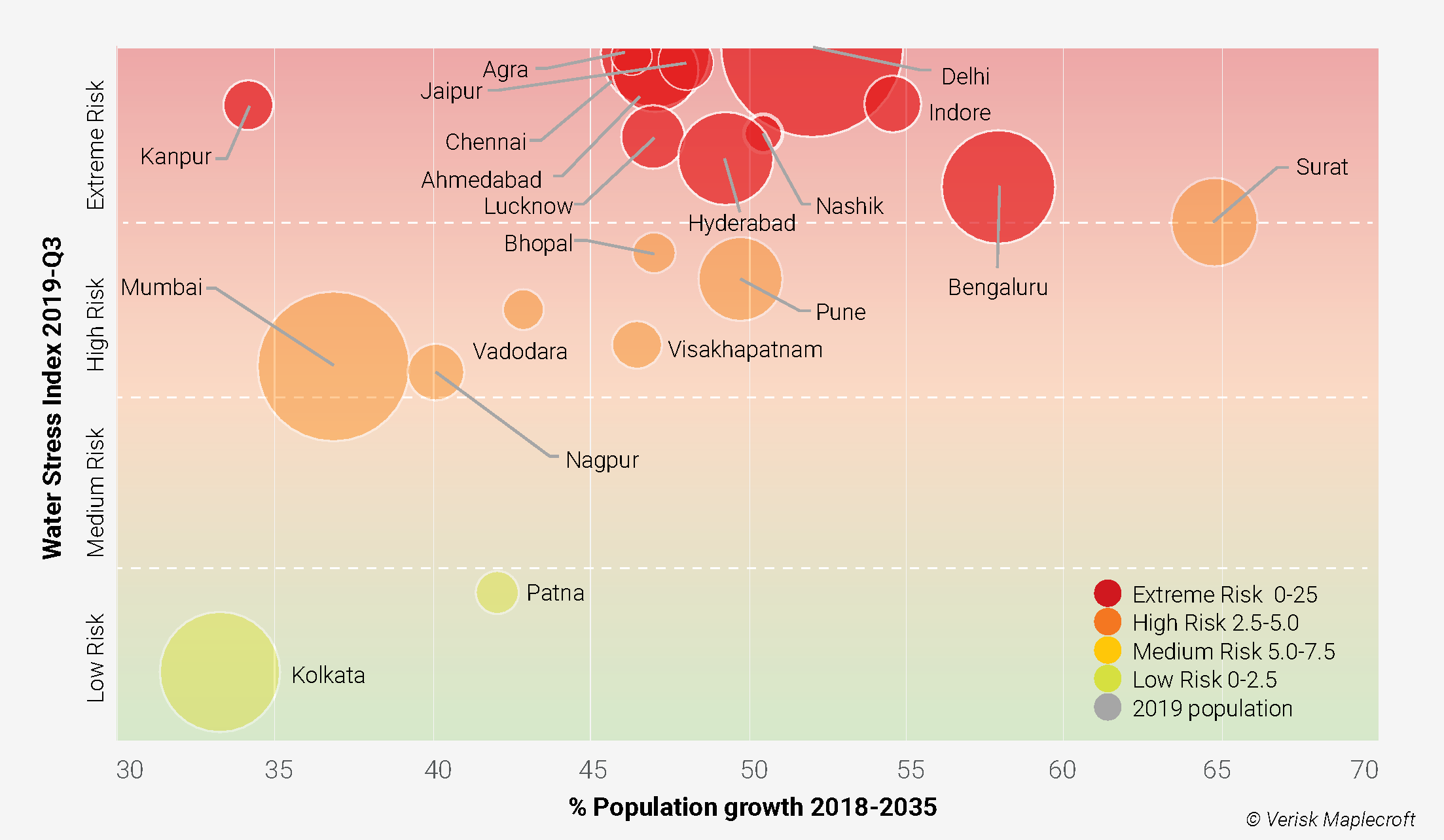 Like Chennai, fellow megacity Delhi is also extremely vulnerable to rising demand and water stress. We used the Water Stress Index to compare projected population growth in India’s other largest cities. The extreme risk city of Bengaluru (Bangalore) and high risk Surat are also experiencing the greatest increases in water demand and are most at risk of future shortfalls in supply.

While water supply in Mumbai and Kolkata remains a pertinent issue, lower population growth projected for these cities means they are at a lower risk of future water shortages.

India is rated ‘high risk’ in our Climate Change Vulnerability Index, indicating its water management strife will be exacerbated towards the middle of the century.

Businesses operating in high risk areas of India will need to prepare for the water shortage now to avoid disruption, exorbitant prices and civil unrest.

Find out more about the Water Stress Index

Our Water Stress Index measures water use by households, industry and agriculture, as well as available supplies from rivers, streams and lakes, to quantify pressure on those resources. Find out more and download a sample report.