More than 600 billion barrels equivalent of the world’s commercially recoverable oil and gas reserves are facing high or extreme risks from more frequent storms and floods, rising sea levels, and temperature extremes. According to our Climate Change Exposure Indices, Saudi Arabia, Iraq and Nigeria are among the oil and gas producing countries where the risk of climate related events disrupting the flow of oil to global markets is highest. Between them, these three countries account for nearly 19% of commercially recoverable oil and gas.

Climate-related supply threats to the oil and gas industry have already begun to manifest. This year a freeze in Texas knocked US oil and gas output to a three-year low, while Hurricane Ida caused a record 55 spills in the Gulf of Mexico and created historic disruptions to the supply of both crude oil and refined products. Record heat in Russia accelerated the melting of permafrost, a trend that has damaged 40% of buildings and infrastructure in northern regions heavily reliant on oil and gas production.

These types of events are going to become more frequent and more extreme, creating even greater shocks within the industry. But Identifying and disclosing these risks in line with the Task Force on Climate-Related Financial Disclosures (TCFD) recommendations is now a strategic necessity for energy companies if they are to mitigate these threats and offset investor concerns over their transition to a low carbon future.

By combining our subnational onshore and offshore Climate Change Exposure Indices with asset-level data from our sister company Wood Mackenzie, we’ve pinpointed the oil and gas assets most exposed to the physical impacts of climate extremes up to mid-century. The data shows that onshore oil and gas operations are exposed to the full range of the physical impacts of climate change, including sea level rise, storms, heatwaves, flooding, and other extreme weather events. Offshore operations, such as in the Gulf of Mexico, on the other hand, are vulnerable to tropical cyclones and extreme wave heights.

In total, 10.5% of global commercially recoverable reserves are found in areas rated as extreme risk in the Climate Change Exposure Indices, while 29.5% were high risk. This amounts to around 617 billion barrels equivalent.

Figure 1: Over 40% of commercially recoverable oil and gas reserves are highly exposed to the effects of climate change 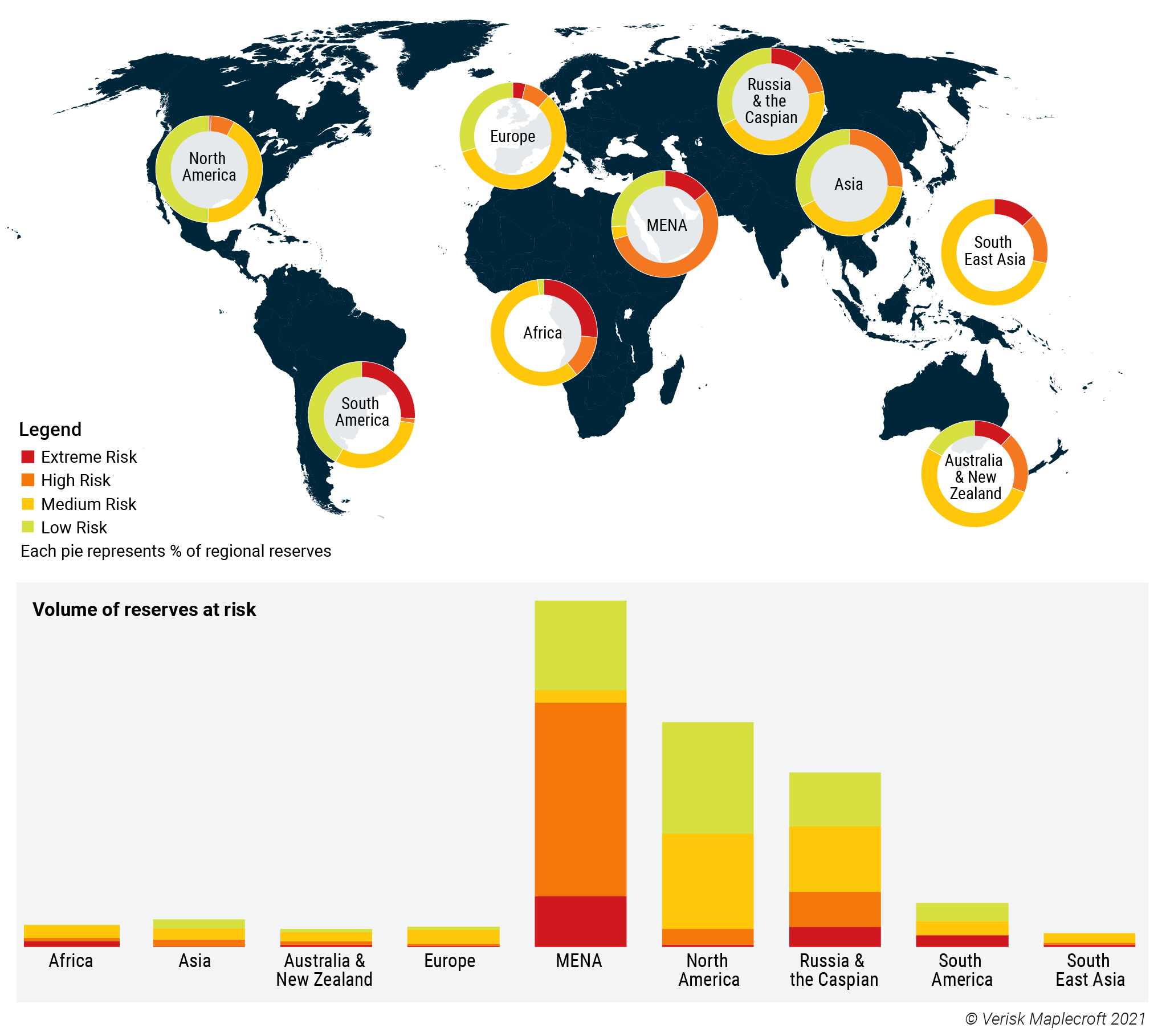 Figure 1: Over 40% of commercially recoverable oil and gas reserves are highly exposed to the effects of climate change

The Middle East and North Africa region is not only home to the largest reserves in the world, but it also has the highest proportion of reserves at risk. Saudi Arabia’s long-term economic strategy rests on leveraging its low lifting costs and low upstream carbon intensity, especially as the oil majors come under pressure to reduce output. But uncertainty over the trajectory of oil and gas demand over the coming decades aside, Saudi Arabia’s severe exposure to heat stress, water shortages and dust storms stands out as the Achilles’ heel in this strategy.

Africa has the second highest proportion of reserves under threat, although it accounts for a comparatively small amount of the world’s commercially recoverable reserves. In Nigeria, 72% of reserves – almost entirely blocks in the Niger Delta – are facing high or extreme climate risk exposure. The country faces rising temperatures and fluctuating rainfall patterns, bringing both droughts and flooding that will not only compromise hydrocarbon production but also restrict agriculture and effectively render the economy even more dependent on those threatened oil and gas reserves.

Companies with reserves in locations highly exposed to the physical impacts of climate change will face more disruptive events, potentially higher costs for extraction, and the need to invest in mitigating actions. Production may have to be halted and a plant secured to allow for the passage of tropical storms, or coastal infrastructure will need to be raised to account for storm surges and sea level rise. Risks of accidents and spillages in ecologically sensitive locations could also increase as pipelines are exposed to more extreme weather events that they may not have been designed to withstand. 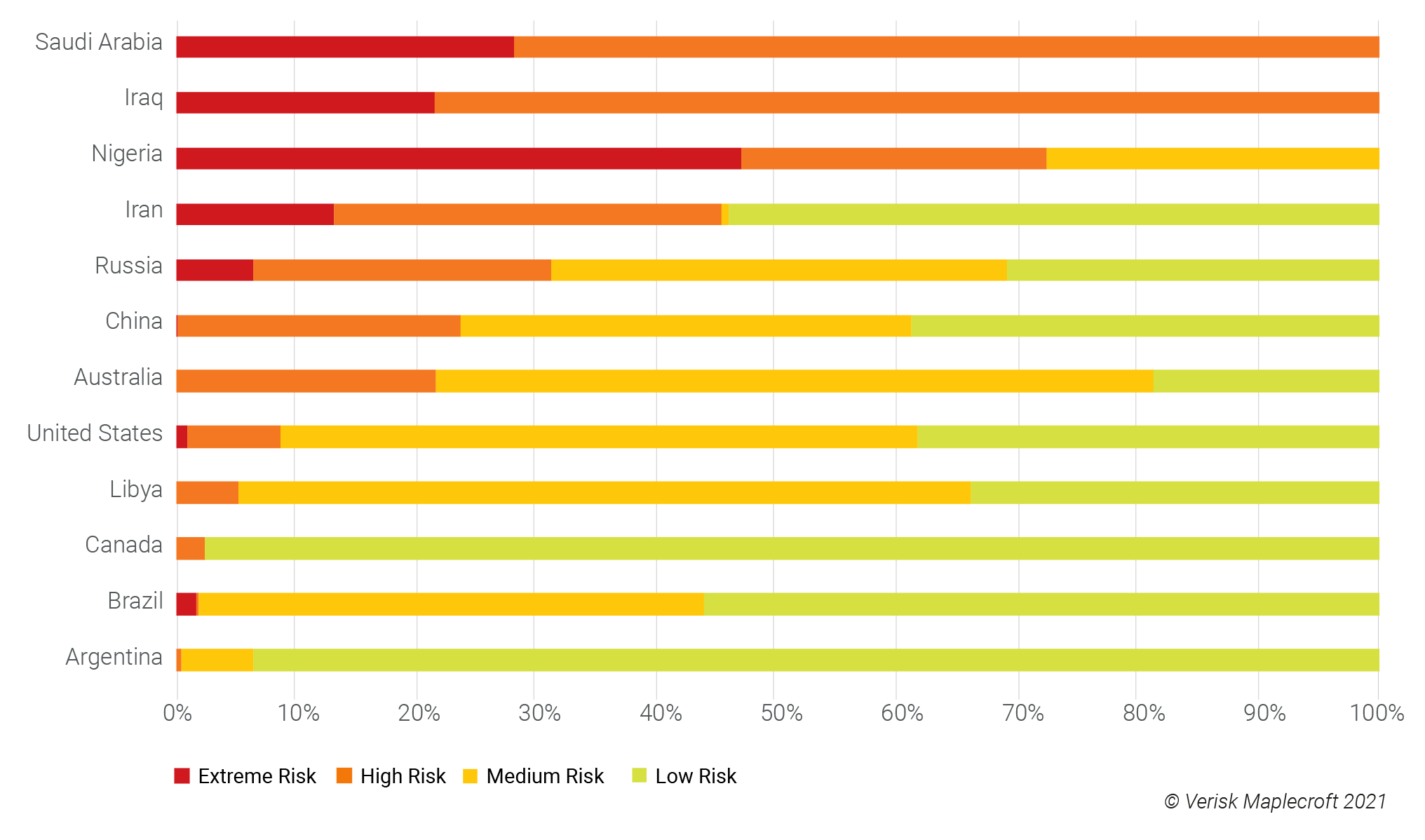 There is no escaping the fact that the oil industry is highly exposed to the physical impacts of climate change, as well as a tougher regulatory universe. To keep investors onside, energy companies will need to show that the raft of net-zero targets they’ve unveiled are actually supported by corporate policy, by investment and by action.

Aligning strategies with the TCFD recommendations to ensure companies are identifying and reporting both their physical risks from the impacts of climate change and transition risks, related to the shift to a lower-carbon economy, is the first and best step that oil and gas companies should take. Understanding the exposure of oil and gas assets to both types of risk under different future climate change scenarios will be central to helping energy companies channel investment into lower risk assets and implement mitigation actions.

The costs of inaction could be genuinely existential.