The ubiquity of sanctions

The ubiquity of sanctions

A fifth sanctions package being readied by the European Commission against Moscow stops short of an embargo on Russian oil and gas (O&G) imports, with a focus instead on a ban on coal imports worth EUR4.0 billion a year.

According to Commission president, Ursula von der Leyen, the package also contemplates a full ban on four Russian banks, including the country’s biggest, VTB, while Russian ships will be prevented from entering EU ports, and Russian and Belarusian road-transport operators likewise will be barred. Additionally, the EU would prevent exports to Russia of advanced semiconductors, quantum computers and sensitive machinery and transport equipment (worth some EUR10 billion a year), while stopping imports from Russia of alcohol, cement, seafood and wood.

Meanwhile, the US Treasury has put a stop to Russia’s ability to make sovereign debt payments in dollars via US-based government bank accounts. The move aims to oblige Russia into choosing from three (unpalatable) options - draining dollar reserves held internally, spending new revenue, or going into default. To date, Russia has remained current on its foreign-currency debt, but this latest measure makes that more difficult.

Whatever these financial measures, many economists now warn that unless Western sanctions are expanded to include (at least partially) the O&G sector – thereby denying Putin a forecast USD321 billion windfall this year – he may be able to muddle through, albeit at high cost to his own people.

Our Eastern Europe Analyst, Ophelia Coutts, warns of stormy days ahead, including planned counter-measures by Moscow. Since the war began on 24 February, over 300 foreign companies have announced plans to suspend or divest operations in Russia. Moscow has responded by imposing strict new rules for foreign investors seeking to sell Russian assets, leaving many Western companies stuck in limbo. With little prospect of selling their assets any time soon, corporations will either need to play for time, or accept large write-downs to make good on their divestment pledges.

Moscow is also threatening to go a step further and expropriate the property of companies from ‘unfriendly countries’ intent on exiting Russia. The Duma on 16 March fast-tracked a bill that would allow assets to be seized and put under external management, though this is still awaiting presidential approval. The Kremlin appears to be stalling, perhaps judging that the looming threat of the bill is enough to dissuade foreign companies from pulling out of the local market.

This threat of nationalisation was sufficient for us to downgrade Russia’s score in the 2022-Q2 iteration of our Resource Nationalism Index. Russia was already categorised as extreme-risk in 2021-Q1 with a score of just 1.91/10.00.

But clearly, Moscow’s ultimate card is energy supply. It is hardly a coincidence that the Kremlin recently moved to restrict crude exports from Kazakhstan to Europe via the Caspian Pipeline Consortium (citing storm damage to the terminal on the Black Sea coast), Coutts notes.

Another Russian measure – a demand that gas exports sold to ‘unfriendly states’ be paid in roubles (or gold) from 1 April – may well be extended to a range of other commodities.

Moscow has similarly threatened to repay dollar-and euro-denominated sovereign bonds due in late May in roubles – a threat potentially made more real in light of the latest US Treasury moves.

As per von der Leyen, additional sanctions, including on oil imports, are under consideration. In the event of a full energy embargo by the EU, it is unlikely that Russia would be able to divert sufficient exports to China/Asia to make up for the hit – and over time it likely would have to offer its oil at an increasingly steep discount, and at high cost to both upstream and midstream operators in Russia’s O&G industry.

But equally, the short-term costs to Europe of such a move would clearly be huge, likely pushing Europe and much of the wider global economy back into recession. A demonstration perhaps of the (inevitable) disorderly transition away from fossil fuels, reflecting the collective failure of governments to prepare.

What’s the alternative? Experts such as Harvard Professor Ricardo Hausman – a Venezuelan well versed in the economics of sanctions – argue in favour of a heavy tax on Russian O&G imports over an oil embargo, on the grounds that this would essentially be paid by Russia. Equally importantly, it would also be in China’s interest to impose such a tax, he suggests.

Venezuela – under punishing US financial and oil sector sanctions for the past half-decade – is a useful example, but also a cautionary tale. If anything, sanctions have entrenched the Caracas regime, even as the oil sector and the rest of the economy have been decimated.

Likewise Iran. And of course, Cuba’s communist regime, still in place 60 years after a full US economic embargo was imposed by JFK in 1962.

The utility of sanctions is thus very far from assured. But with the West unwilling to be drawn into armed conflict with nuclear powers, ‘economic warfare’ seems here to stay.

Jonathan Hackenbroich, Policy Fellow at the European Council on Foreign Relations, recently told the World Economic Forum (WEF) a new phase of globalisation is taking shape, characterised by 'the increasing use of economic tools for geopolitical purposes (or geo-economics) and systemic rivalry'.

International relations will be shaped above all by ‘economic warfare’, as the big powers can more easily use asymmetric dependencies in economics – for example access to US financial markets – as a means of pressure. Russia, for instance, will now have to deal with the difficulties that come with a fast and wide-ranging decoupling from large parts of the international financial system.

As ever, the big question is China. While the sanctions on Russia show that US influence over the global economy’s key chokepoints remains unparalleled, it is also obvious that using the same tactics on China would be extremely difficult for the West.

Looking ahead, Hackenbroich sees the global economy becoming more polarised between democracies and autocracies, with an increasing share of world trade power-based rather than rules-based.

Many EMs (particularly in Asia) will try to hedge between the two.

Meanwhile, Western governments, companies and all manner of financial institutions will have little choice but to factor in ESG and geopolitical risk to a much greater degree in investment decisions.

Most ASEAN states are hedging between the US and China 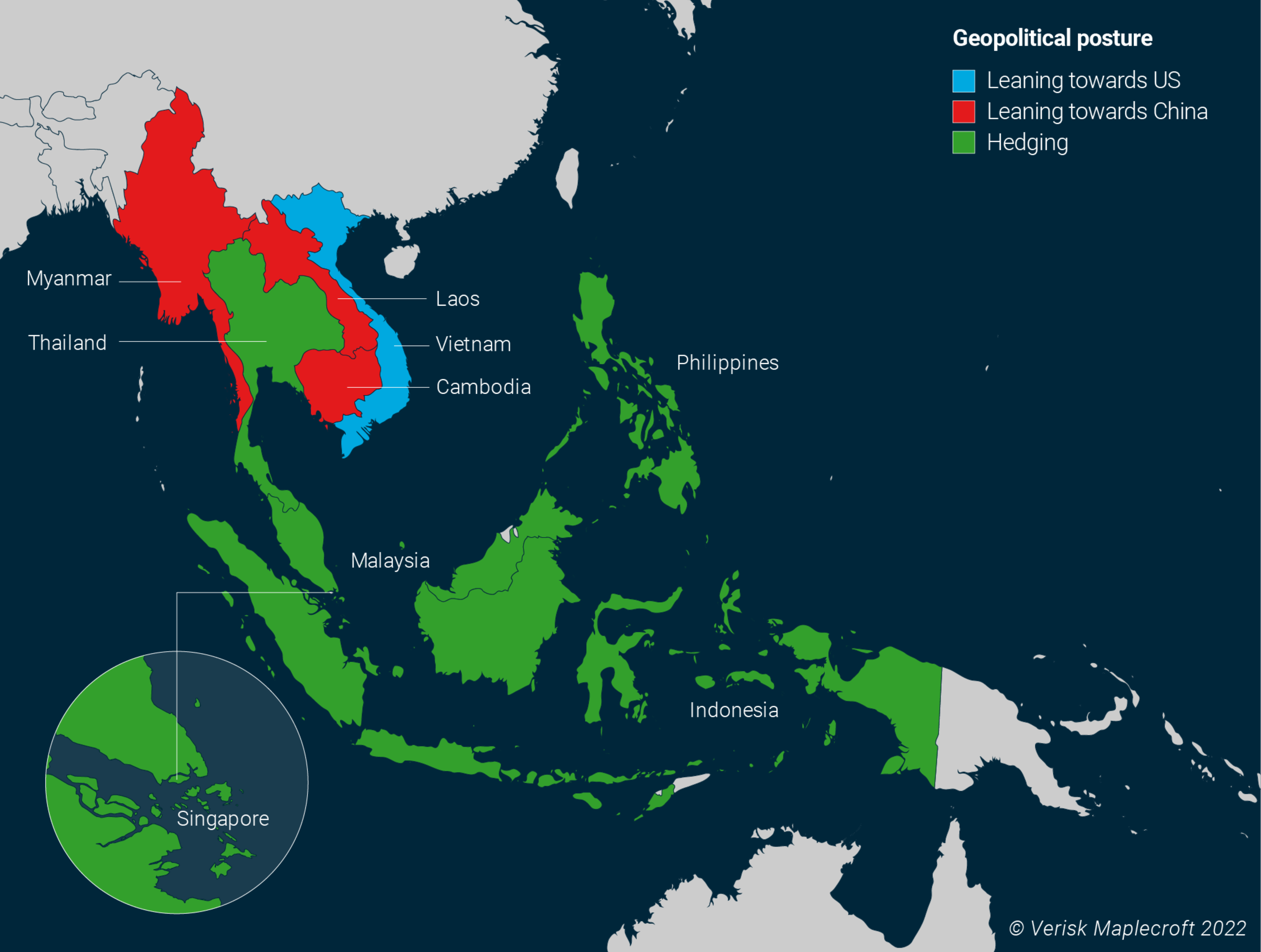 Most ASEAN states are hedging between the US and China

We won so big you can see it from the moon, let alone from Brussels.