Kermit the Frog was right. It’s not easy being green, especially at the end of a week when President Joe Biden released a record 180 million barrels of crude oil from the US Strategic Reserve, and ordered US producers to pump faster.

Leading US banks will be happy to assist. According to the latest (March 2022) Fossil Fuel Financing Report (compiled by Bank Track, Reclaim Finance and five other NGOs), overall global fossil fuel financing remains dominated by four US banks, who together accounted for fully a quarter (25%) of all identified fossil fuel financing in the past six years. Total fossil fuel financing from the world’s 60 biggest banks is now estimated at USD4.6 trillion since adoption of the Paris Agreement in 2015, of which USD742 billion in 2021 alone.

Taken as a whole, the report notes, bank fossil fuel financing was flat from 2020 to 2021, under continuing pandemic conditions - yet it is still higher than it was in 2016, after the Paris Agreement. In a nutshell, Canadian banks are backing tar sands, US banks fracking, MENA expansion and Arctic exploration, and Chinese banks coal.

The report echoes the International Energy Agency’s demand for the immediate cessation of all new oil and gas development. But given the current global juncture, with the US, China and Europe all looking to reinforce short-term energy supply on the back of the Russia-Ukraine war, there is a very clear possibility that it will rise again in the coming years.

The report is scathing for banks “patting themselves on the back” for committing to Net Zero 2050 (fully 44 of the 60), the Net-Zero Banking Alliance and the umbrella Glasgow Finance Alliance for Net Zero (GFANZ) - even as they simultaneously provided “massive support’ to the 20 companies responsible for more than half of resource development and exploration Capex.

Of the 60 banks included in the report, 28 led financing for the top 20 upstream oil and gas expansion companies in 2021. This support is very concentrated. The top 10 bankers of those top 20 companies have accounted for two-thirds (63%) of the companies’ big-bank financing since the Paris Agreement. All 10 are formally committed to Net Zero 2050.

As the report notes, there is “a serious disconnect between net-zero aspirations and current practices”. Out of the 44 banks in the report currently committed to net-zero by 2050, 27 still lack a meaningful corporate-level ‘no-expansion policy’ for any part of the fossil fuel industry.

While most banks tout policy language addressing fossil fuel finance, much of the focus is still on project-specific finance, and/or only on coal.

Yet, most fossil fuel financing since 2016 has been to oil and gas companies, and the vast majority was not project-specific financing.  In other words, there is a big discrepancy between where banks have focused their policies and where money is actually flowing.

And another critical finding is that the majority of bank fossil fuel financing over the last six years has been in the form of bond and equity underwriting, as opposed to lending. Again, this amounts to a glaring loophole for any bank policy that applies to lending only.

The banks were not invited to comment for the report, but even accepting the fact that most Western banks strongly argue in favour of engagement over divestment, there will be fresh accusations of wholesale greenwashing.

And it’s not just activist NGOs calling out the sector. As we mentioned last week, the European Central Bank (ECB) recently complained that, for the second year in a row, the vast majority of banks were woefully inadequate on climate disclosure and instructed them to adjust their practices without delay.

Echoing this, the report also warns that the ‘net’ in Net Zero also threatens to entrench a system of offsets that does not nothing to reduce emissions.

Against this, the evolving international regulatory framework may prove instrumental. With the proposed new disclosure rules from the US SEC, plus existing TCFD disclosure rules in other countries, portfolio risk exposure is growing, as is the pressure to set out material pathways to Net Zero pledges.

TCFD rules in progress across the world 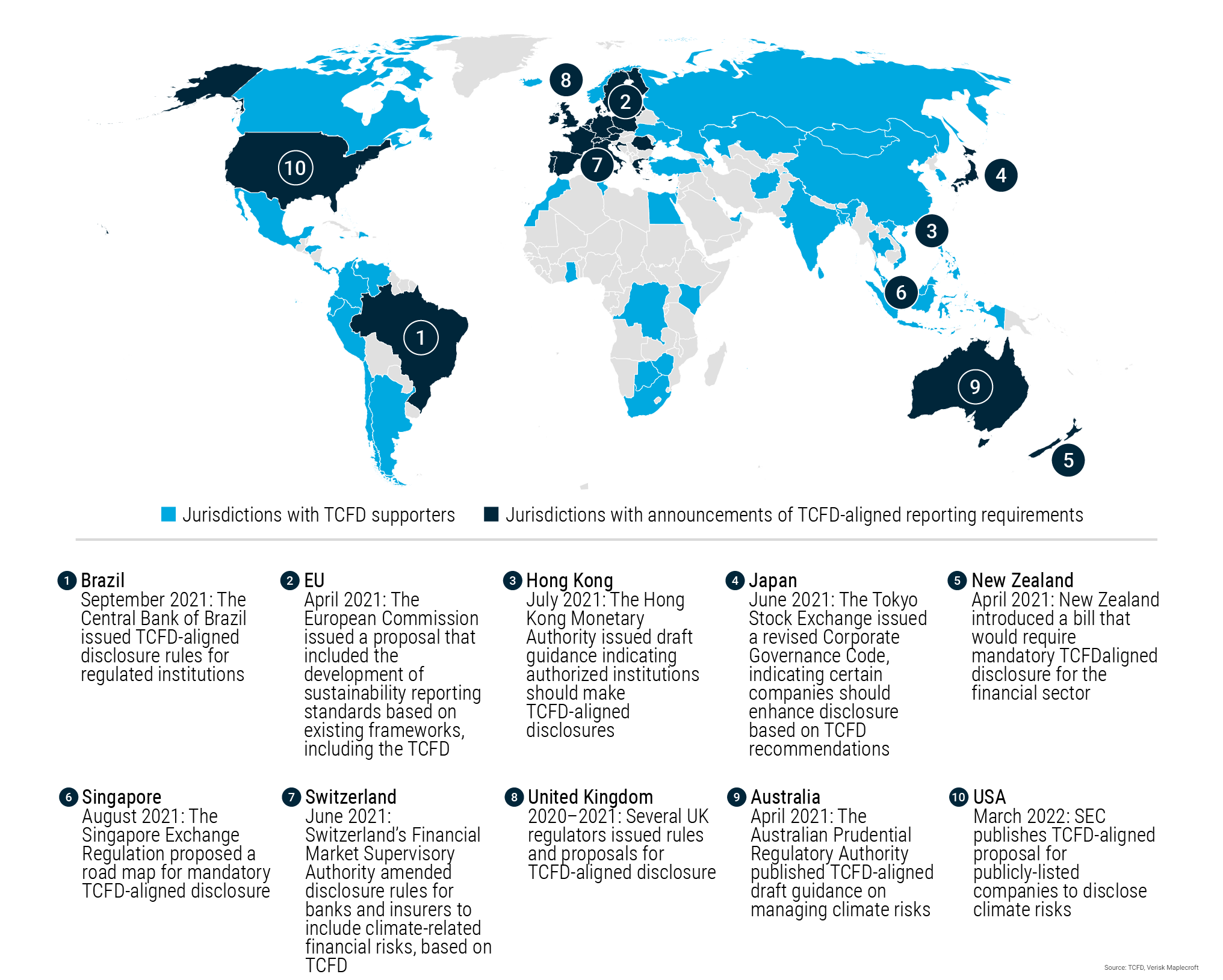 TCFD rules in progress across the world

We do not have a strategy of regime change in Russia or anywhere else, for that matter. In this case, as in any case, it’s up to the people of the country in question.

US Secretary of State Anthony Blinken issues a clarification after President Joe Biden appeared to call for Vladimir Putin to be ousted, 27 March 2022