Will Turkey rock the boat for E&P in the East Med?

Risk of disruption to exploration and production in East Med

The East Mediterranean will remain a focal point for O&G executives in 2019 as exploration plans move ahead. Eni will be particularly busy. The Italian company is due to launch appraisal drilling off Cyprus in Block 6 (Calypso) to fully assess the reservoir’s potential and is also expected to be awarded Block 7 as part of a consortium that includes France’s Total. To the east, Israel expects to announce the winners of its second bidding round for 19 offshore blocks in July.

If 2018 is anything to go by, IOCs cannot expect smooth sailing over the course of 2019 due to geopolitical tensions and competing claims for the Mediterranean’s riches. Back in February, for instance, a drilling vessel contracted by Eni was blocked by the Turkish navy from reaching Block 3, offshore Cyprus. That same month, Lebanese political and armed group Hezbollah released pamphlets and a video threatening to target E&P infrastructure off the Israeli coast.

The big question is whether Hezbollah will follow through on its threat and whether IOCs operating in waters which Turkey and the Turkish Republic of Northern Cyprus (TRNC) claim sit within their Exclusive Economic Zones (EEZ) will once again be frustrated by the Turkish navy.

Turkey’s bark is worse than its bite, but its bite can hurt too

Our base case for offshore Cyprus is that Turkey will continue to posture and flex its muscles in the East Mediterranean. Our East Mediterranean Disruption Index Projection (EMDIP) places the risk of an incident occurring which would cause disruption to offshore operations at 4/10.00. This means that the Turkish navy is more likely than not to harass drilling ships looking to explore in disputed waters, if left undeterred.

The main drivers behind this score include the negative trajectory of Turkish policy in the East Mediterranean and the fact that Turkey got off lightly for blocking Eni’s drilling vessel in February. Ankara has an incentive to do so again in a bid to force Greek Cyprus to sit down and come to an agreement to share future hydrocarbon revenues with the TRNC, which it solely sponsors.

While our data shows that President Erdogan’s bark on the East Mediterranean is typically worse than his bite, the Turkish navy is likely to sustain, or even expand, its presence in the region in 2019. This is not just to shield Turkey’s own drilling in Mediterranean waters, but also to discourage IOCs such as Eni and Total from discovering new reserves and, by extension, strengthening Greek Cyprus’ hand as a regional player.

Turkey’s bolstered naval presence does not mean that Ankara would go to war in the East Mediterranean or Aegean Sea. This is notwithstanding the highly unlikely scenario of Greece expanding its territorial waters from six to twelve nautical miles in the Aegean. In normal circumstances, the rules of engagement make war between the two NATO allies extremely unlikely.

Disruption risk for IOCs boils down to conflicting EEZs 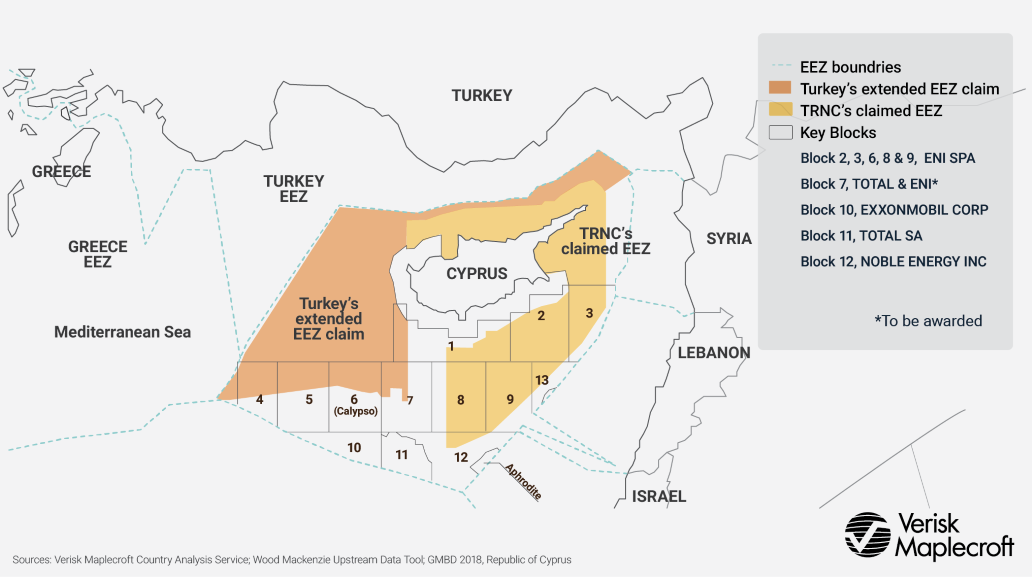 Disruption risk for IOCs boils down to conflicting EEZs

The threat of disruption to E&P activity off Israel is not, for the foreseeable future at least, as acute as off Cyprus. This is reflected in offshore Israel’s modal score of 6.67/10.00 in EMDIP, as shown below. Though ideologically bent on the destruction of Israel, Hezbollah is very unlikely to have an incentive in 2019 to spark what would without doubt be a devastating conflict for both Lebanon and Israel.

The party-cum-militia currently occupies the largest share of parliamentary seats in Lebanon and would be shooting itself in both feet by provoking Israel at a time when it enjoys strong domestic political traction and has not reached maximum military strength. The group has lost up to 1,800 mostly hardened fighters in the Syrian war, although anecdotal evidence suggests that it has been able to attract a good flow of new recruits.

Even in the event of war between Israel and Lebanon, Hezbollah would not necessarily be able to damage O&G infrastructure off Israel. The group’s ability to penetrate Israeli defences around offshore drilling rigs remains untested and Prime Minister Netanyahu stated this month that Hezbollah owned at most a few dozen precision missiles.

But the Israel Defence Forces (IDF) are rightly concerned about Hezbollah’s continuous drive with the help of Tehran to upgrade its missile arsenal – a stockpile which has expanded 10-fold to around 150,000 rockets since the war of 2006.

And so IOCs can’t completely dismiss the possibility of an unplanned escalation triggered say by Israeli airstrikes in Lebanon to set back Hezbollah’s missile development programme.

New discoveries will exacerbate the risk of disruption near Cyprus

Hezbollah will not have any more of an incentive to attack Israel should future discoveries in Israeli waters prove big. This is little cause for comfort, however, as a large part Hezbollah’s identity hinges on violently resisting Israel and its range of interests. Furthermore, Israel’s claim on contested waters was the very trigger behind Hezbollah’s threat against drilling rigs off Israel in February.

The dynamic is different for Turkey. The risk of a naval standoff or interception by the Turkish navy of IOC drilling rigs will probably rise in the event that new and large gas discoveries are made around Cyprus. Turkey’s determination to secure a piece of the pie for the TRNC and to defend its own EEZ will follow the same trajectory. 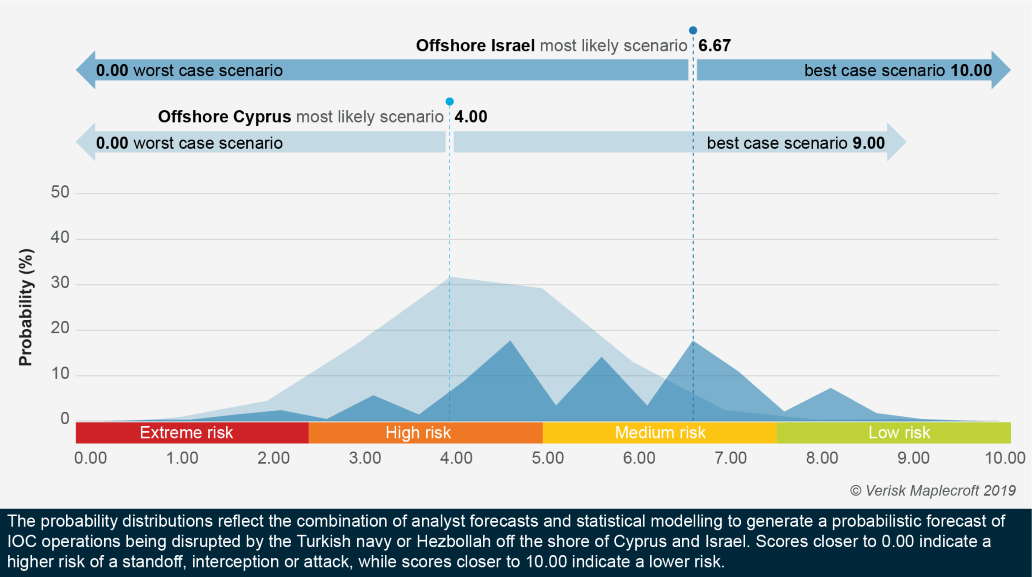