Despite pledges by US political actors to introduce – in the words of Senator Lindsay Graham – “crushing” new sanctions on Russia, the likelihood that new restrictions on the country’s financial sector will be enacted remain minimal. We forecast that there is just a 15% chance of transaction restrictions being placed on any of Russia’s five biggest banks (Sberbank, VTB, Vneshekonombank, Gazprombank and Alfabank) prior to 1 August 2019.

Russia has also taken actions to sanctions-proof its economy, which means that US and allied states have little incentive to enact new measures that will cause domestic economic pain with little prospect of significantly hurting key institutions or power players. Additionally, political change has resulted in greater strategic divergence between the EU and US, and less appetite for burden sharing, reducing the likelihood of a co-ordinated package of financial restrictions further.

While the Kremlin has taken domestic measures to pre-empt the threat of sanctions, Russian foreign policy has been more provocative and aimed at seeing what actions will elicit a Western response. In the absence of new sanctions measures, Russia will be incentivised to act in a more confrontational and aggressive manner.

This dovetails with our forecast that waivers will continue to be extended for the oil embargo in place against Iran. In both cases, we anticipate that despite intensified rhetoric from Washington, the US will ultimately avoid pursuing a maximalist sanctions policy. This substantially reduces the risk to existing investments in Russia, as well as renewed instability in markets of Russian produced commodities.

US lacks will to engage in Russian financial sanctions struggle

Our low probability forecast relating to the imposition of new sanctions is driven primarily by the fact that financial sector sanctions, in particular, would be regarded as a major escalation. The Kremlin has explicitly stated that it would regard such a move as tantamount to “economic warfare” and threatened an asymmetrical response.

The Trump administration’s Russia policy has been difficult to predict. The unintended impact on global aluminium markets of additional sanctions enacted in April 2018 – and the resulting US climbdown – have substantially diminished Washington’s appetite for a confrontation. The decision to place Oleg Deripaska on the sanctions list dramatically impacted global aluminium supply, causing input prices for US and European manufacturers to spike and roiling commodity markets. The quick issuance of several waivers following the imposition of sanctions indicates the Treasury Department did not anticipate the scale of their impact, and that this week’s decision to lift sanctions represents a means of saving face.

Financial sector sanctions would also be extremely challenging for US agencies to enforce – existing sanctions on Iran have tested the capacity of the Treasury department.

While the US administration responded to the attempted assassination of Sergei Skripal in the UK in March 2018, by invoking counter-chemical weapons legislation (the CBW act) – signalling a major escalation in the sanctions regime – it has allowed the act’s deadline for the imposition of heightened sanctions to pass without action. More notably, a skirmish between Russian and Ukrainian naval forces in November, and the subsequent detention of Ukrainian naval personnel, has not elicited a response from the White House.

Breaking up the team - US and its allies

US and allied sanctions have become less co-ordinated and severe since the start of Ukraine crisis.

Timeline of Russian sanctions since 2014 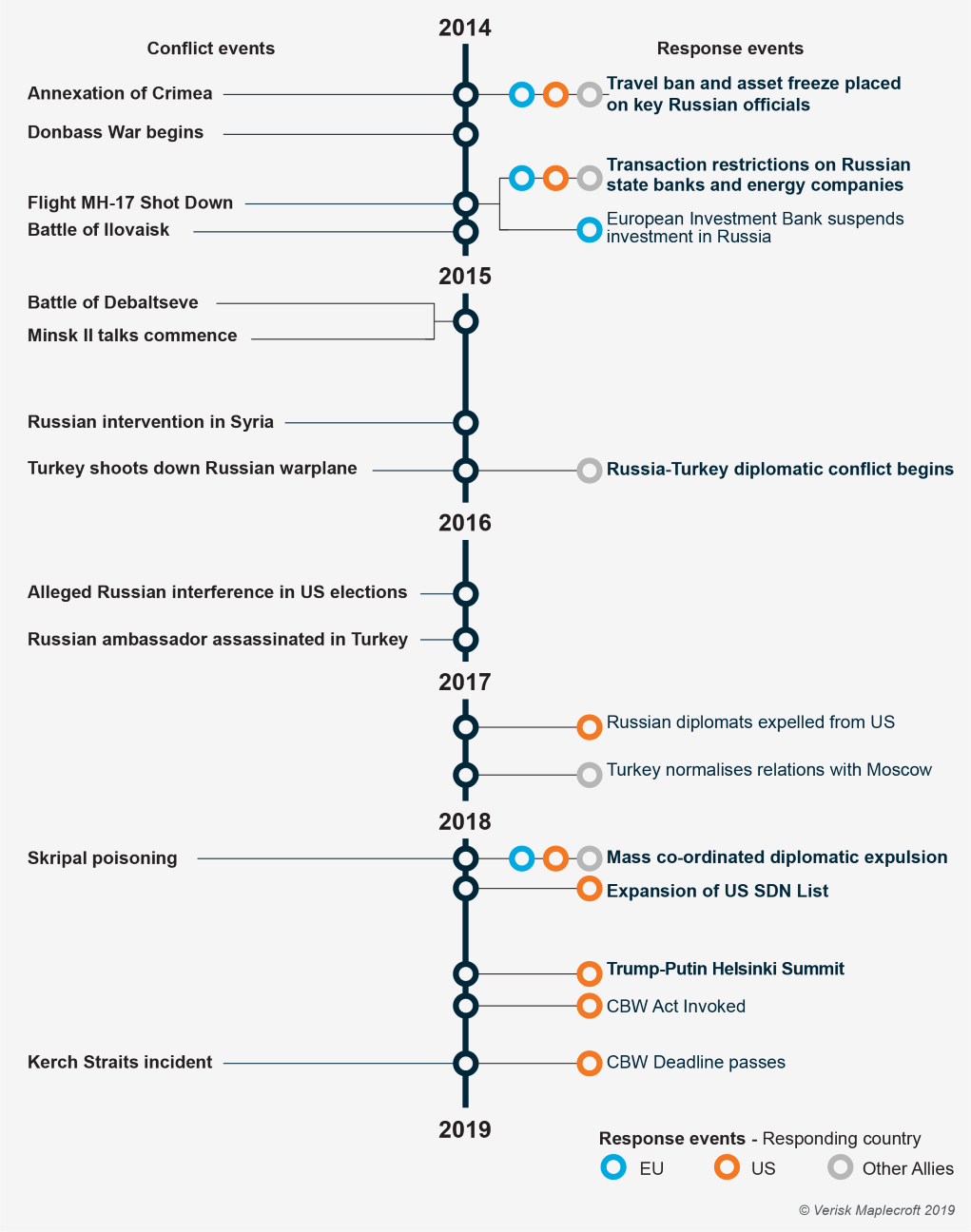 Timeline of Russian sanctions since 2014

Since President Trump’s election, the strategic coordination between Europe, the US and other allied states that characterised the early sanctions regime has broken down. Following Russia’s annexation of Crimea and its invasion of the Donbass in the first half of 2014, the EU and US synchronised their introduction and application of specific legal measures. By contrast, since 2017 the only major coordinated effort was the joint diplomatic expulsions in response to the poisoning of Sergei and Yulia Skripal, an important but mostly symbolic measure.

The reason for this shift is straightforward: the initial regime required in-depth coordination and negotiated burden-sharing between the US and other sanctioning states.

The Trump administration’s claim that European states “take advantage” of US economic largesse is a leitmotif of its foreign policy. The election of several populist governments sympathetic to Russia. This has reduced the political will for both intensifying sanctions and sharing the resulting economic pain equitably.

Nevertheless, Russia has taken the threat of financial sector sanctions very seriously, and has enacted counter-measures which have had a structural impact on the Russian economy. The Russian central bank has increased its foreign currency reserves while reducing its holdings of US T-Bills as part of an effort to sanction-proof the financial sector over 2018. Greater fiscal discipline and higher than expected oil prices have pushed the federal budget into surplus.

More generally, economic policies adopted in the light of the original sanctions regime have proved to be broadly beneficial to the economy, particularly import substitution in the agricultural sector. Hydrocarbon revenues, while still important to Russia’s overall economy, are becoming less important for basic macroeconomic indicators such as the ruble exchange rate, which in turn has stimulated the competitiveness of Russian exports.

Status quo of US unpredictability almost certain to endure

The political dynamics in Washington are set to be even less predictable in 2019 than during the first half of the Trump administration, and this unpredictability argues against firmly ruling out any flare-up in Russia-US tensions. The reluctance of the US and its allies to agree to new sanctions will also encourage Russian foreign policy assertiveness. While new sanctions may be unlikely under current conditions, neither is any change to the status quo sufficient to alter the existing sanctions regime.

Why do we use judgement-based forecasting?

Our forecasting method is based on academic research into best practice for achieving accuracy in probabilistic forecasting. Analysts establish a baseline probability for the general occurrence of the type of event in question before considering factors pertinent to the specific case. Anchoring a forecast to the general occurrence of an event is an essential first step towards eliminating bias; our internal process, which includes group forecasts and peer reviews, also ensures that our analysis is robust. Our forecasts are updated throughout the forecast period and we track the accuracy of our predictions over time.