Will energy firms weather the storm?

Oil and gas assets could be exposed to extreme weather

Using our new Corporate Exposure Tool, we've found that US offshore production is much more exposed to tropical storms and cyclones than offshore operations globally. The newly developed tool measures asset-level company and industry exposure to a range of natural hazards, along with 100+ other political and ESG risks, by marrying our risk data with field-level commercial data from our sister company Wood Mackenzie.

When Hurricane Harvey made landfall, it dumped more than 50 inches of rain in and around Houston, Texas, and temporarily disabled more than 10% of US oil and gas refining capacity. In contrast to the major disruption to refineries, US oil and gas producers operating in the Gulf of Mexico dodged a bullet. The near-misses from Harvey, and the major hurricanes in September, are now followed by Tropical Storm Nate, which has led to BP shuttering its offshore operations in the Gulf of Mexico.

These latest events underscore the threat that extreme weather poses to energy producers and the need for the industry and investors to understand which assets and companies are most exposed.

US offshore producers most at risk

72% of US offshore production in 2017 takes place in areas categorised as extreme or high risk in our Tropical Storm and Cyclone Hazard Index, compared with 7% of the rest of global offshore production (see Figure 1). The US exposure represents an average of 1.6 million barrels of oil equivalent per day of production. The same disparity is evident when it comes to offshore reserves, with over 52% of US reserves in high and extreme risk areas compared with just over 6% of offshore reserves globally.

Exposure of offshore production and reserves to storm and cyclone risk 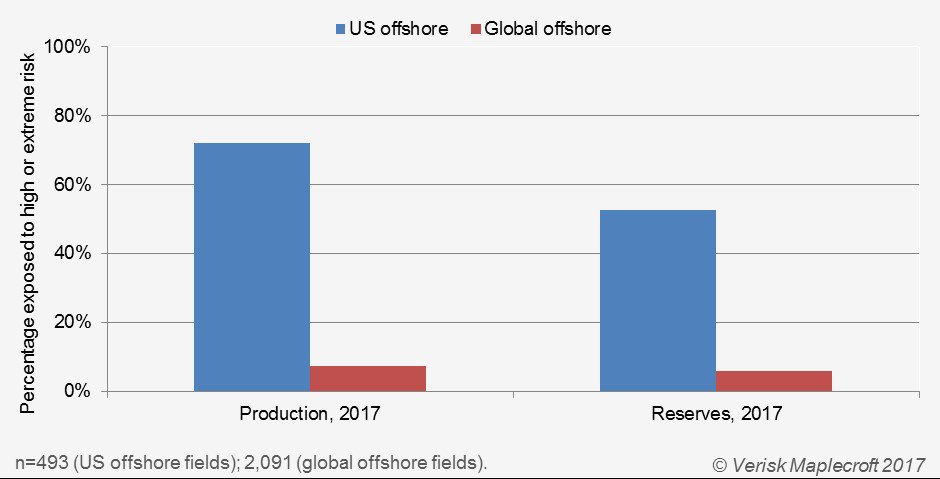 Exposure of offshore production and reserves to storm and cyclone risk

Offshore producers are accustomed to operating under hostile weather conditions and, in extremis, can tow rigs out of the path of storms. In the Gulf of Mexico, as Wood Mackenzie notes, improvements in platform design, contingency planning and the reshuffling of production centres over the past decade reduced Harvey’s impact considerably. Yet such conditions impose substantial costs over project lifetimes: even where damage is avoided, downtime proves expensive.

Climate change is likely to worsen the damage from tropical storms, which in turn will have a negative impact on US offshore producers’ cost competitiveness. Not only has there been a significant increase in the intensity of tropical cyclones in the Atlantic basin in the last few decades, but climate models predict an increase in the number of major (category 3+) hurricanes in the future. Operators can also expect coastal flood risks to worsen due to sea level rise and inland flood risks to increase owing to more frequent heavy rainfall.

Globally, the outlook is more encouraging. No single storm or series of storms is likely to have a dramatic, long-term impact on the O&G industry – or a major short-term impact on prices – as only a relatively small percentage of current production and reserves are in extreme or high-risk areas.

The risks for individual O&G companies reflect this, although firms with high exposure – or investors buying their equities or bonds – would do well to pay careful attention. Using field-level risk scores weighted by the share of a company’s production in those fields, we see that overall exposure to tropical storms and cyclones is low for the 10 largest global O&G companies and NOCs, measured by output. The risk landscape for extra-tropical cyclones is roughly the same – though Russia’s Gazprom receives a medium-risk score of 6.55 out of 10.00.

Looking ahead to where future oil supplies will come from, the risk landscape is only slightly more fraught for the largest O&G companies in terms of total reserves. Of the top 10 firms by volume of reserves, all are low-risk for tropical storms and cyclones except the Abu Dhabi National Oil Company, which is classed as medium risk at 7.16/10.00. And Gazprom is again the only firm to fall into the medium-risk category for extra-tropical cyclone risk, receiving a score of 5.98 out of 10.00.

The challenge ahead: Climate preparedness

The global threat that extreme weather poses to oil and gas supply is moderate – even, arguably, when projected climate change over the decades ahead is taken into account. For individual producers, however, the associated downtime will always be expensive, and the reputational and regulatory costs associated with the environmental harm that often follows accidental damage will only increase as investors and governments raise the bar for ESG compliance. The business rationale for routinely assessing exposure across both existing and potential investments is clear.

About the Corporate Exposure Tool

Our new Corporate Exposure Tool combines global data for more than 100 natural hazard, economic, political, and ESG risks with commercial data from its sister company Wood Mackenzie for almost 3,000 O&G companies and 10,000+ onshore and offshore fields. Company-level risk scores are calculated as the weighted average of their geo-tagged commercial exposures.

In the case of extreme weather, risk is calculated using historical storm track and intensity data at a resolution of 5 km sq. for tropical storms and cyclones (of warm-water origin) and 21 km sq. for extra-tropical cyclones (or winter storms, which are mid-latitude storms which that derive their energy from temperature differences between air masses).