As 2017 came to a close, Russian foreign minister Sergei Lavrov was optimistic that the legal status of the Caspian Sea would soon be resolved. His statement raised hopes in the oil and gas sector that the remaining border disputes in the lake’s southern section will finally be settled. A resolution would remove a key obstacle to oil and gas investment in these disputed areas, which account for around 20% of licensed and unlicensed blocks in the Caspian.

Even if a convention is signed in 2018, border demarcation will not be a part of it; the littoral states would still have to resolve this issue through bilateral negotiations. This means the convention would be much less consequential than generally assumed. Indeed, Iran has dampened the optimism generated by Lavrov by reiterating its position, which is irreconcilable with that of the former Soviet states (see infographic below).

We therefore believe that the border dispute between Azerbaijan and Turkmenistan represents the only plausible prospect for a resolution in 2018. Were these two countries to reach a deal, the disputed Serdar / Kapaz oil and gas field would finally be open to renewed exploration.

The immediate gain from Serdar / Kapaz would likely be tempered by an indefinite freeze on developments in Azerbaijan and Turkmenistan’s border regions with Iran. An Azeri-Turkmen agreement would leave Iran in a position where any compromise it made would be seen as a climbdown. Without full demarcation of the lake, development of the southern section’s gas and oil fields will be held up for many years.

Oil and gas the root and key to Caspian disputes

While the uneven distribution of the lake’s hydrocarbon wealth lies at the root of the disputes, the oil and gas resources can also be the key to the solutions. Iran, for example, dispatched gunboats in 2001 to stop Azerbaijan from surveying the disputed Alov exploration block. Meanwhile, Russia was motivated to strike a deal with Baku because of the untapped oil resources. Once Moscow saw the prospective economic benefits – from corporate Russian participation in exploration and potential transit revenues – Russia shifted its position. Similarly, Russia and Kazakhstan are jointly developing fields located in their border region.

These bilateral deals were later consolidated in a trilateral agreement between Russia, Kazakhstan and Azerbaijan. The resulting de facto legal arrangement has facilitated the successful development of oil and gas resources in the Caspian’s northern section.

Territorial disputes in the Caspian are driven by unequal hydrocarbon distribution

Territorial disputes in the Caspian are driven by unequal hydrocarbon distribution

Iran’s position is at odds with that of the other Caspian states. Unless Tehran’s approach to settling borders – or that of Azerbaijan and Turkmenistan – changes, progress in the southern section is only plausible in the dispute between Turkmenistan and Azerbaijan.

Indications are that the Turkmen coffers are emptying rapidly. This would explain why the government in Ashgabat appears open to compromise. While Turkmenistan would very likely have to forego some of its territorial claims in a deal with Azerbaijan, it would open the Serdar / Kapaz oil and gas field to renewed appraisal. The field would be technically challenging and expensive to develop, but its large oil reserves could be the future commercial key – offering easier export logistics than a gas-heavy project in the Caspian.

A resolution to the border dispute with Azerbaijan would also improve prospects for the trans-Caspian export of Turkmen hydrocarbons to the West, including via the proposed Trans-Caspian Gas Pipeline (TCGP), at least on paper. The Turkmen government places a high priority on the construction of TGCP and is therefore likely to be open to compromise with Baku. In practice, however, without a convention on the Caspian Sea, the project risks further objections from Iran or Russia.

Whether a convention is signed or not, the commercial logic behind the TCGP will remain highly questionable. Existing and planned Southern Gas Corridor infrastructure cannot accommodate significant volumes of Turkmen gas without further capital-intensive expansion. Moreover, it is unclear whether the demand for gas in Europe warrants significant imports from Turkmenistan.

In contrast to Turkmenistan, Iran is by all accounts less concerned about the immediate monetary upsides of delineating borders in the Caspian Sea. This, in part, reflects the relatively low priority afforded to the Caspian by the Iranian upstream sector. Moreover, since Iran is set to lose the most by accepting the median line approach – which would give the country at best 13% of the Caspian, significantly less than the 20% it claims – the country has little incentive to make concessions.

At the same time, however, a deal between Azerbaijan and Turkmenistan that excludes Iran would expose the country’s isolation and entrench its disputes. This would once and for all remove the possibility of a multilateral solution involving all the Caspian states and highlight any concessions Iran would make in bilateral deals as a sell-out.

In a worst-case scenario, renewed Azeri or Turkmen attempts to explore in disputed waters risk provoking Iran to militarise the dispute. However, under current conditions, our Interstate Tensions Model forecasts very low risks of militarised conflict between the Caspian states.

The caspian sea - The risk of interstate tensions.. 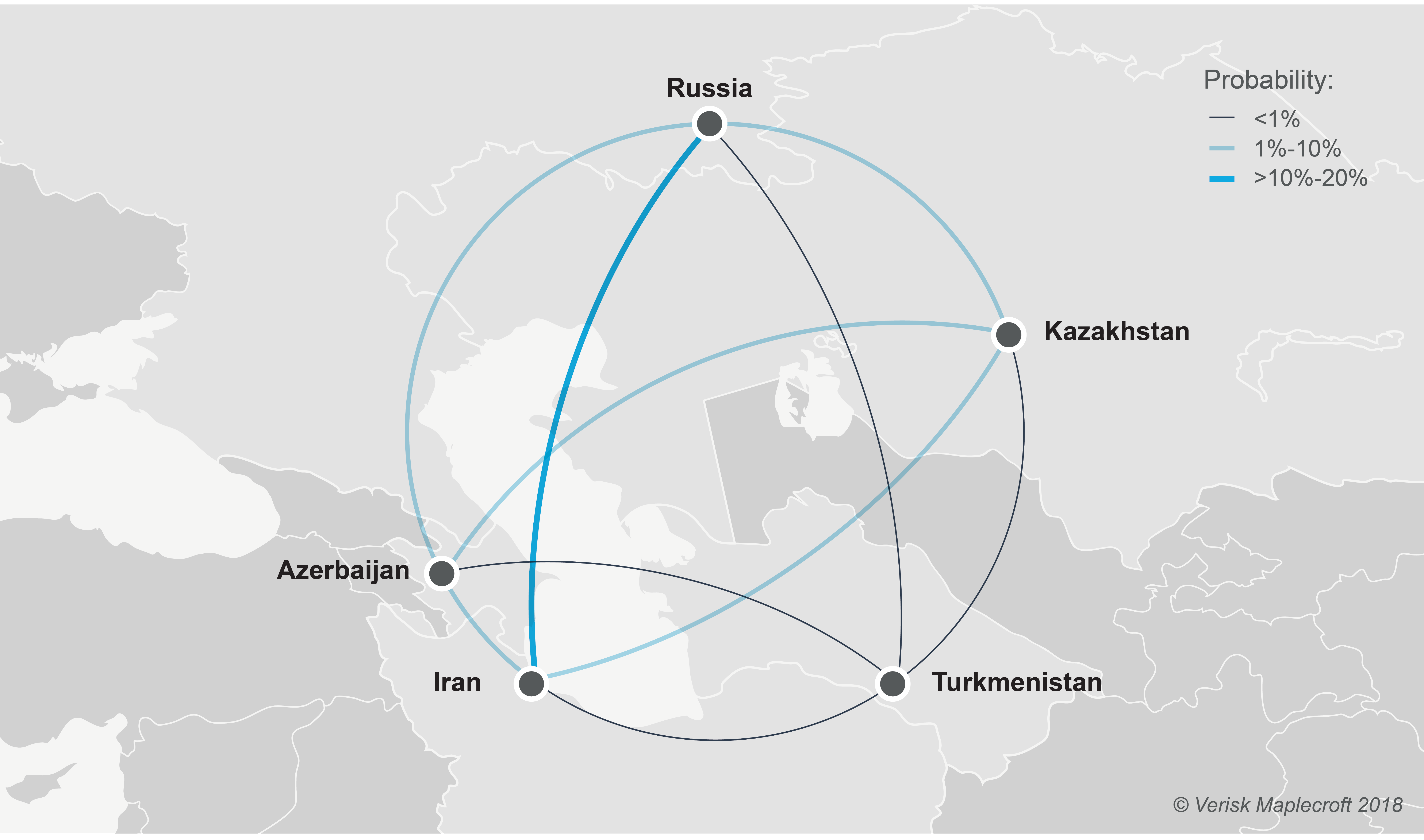 The caspian sea - The risk of interstate tensions..

Despite Lavrov’s talk of a breakthrough on the legal status of the Caspian in 2018, we consider it very unlikely that full border demarcation is on the cards. Moreover, even if progress can be achieved, the TCGP and Serdar / Kapaz face significant challenges. Any short-term opportunities from a deal between Azerbaijan and Turkmenistan would be countered by a long-term freeze on the remaining blocks under dispute as Iran remains isolated in a high-stakes game.