Following a year characterised by widespread conflict and civil unrest, escalating geopolitical tensions and spiralling terrorism fatalities, global stability is unlikely to improve over 2015, according to our seventh annual Political Risk Atlas (PRA).

The PRA, which scores 198 countries on 54 political risks to enable organisations to identify risks to their operations, investments and supply chains, identifies ten countries as posing an ‘extreme risk’ for dynamic, short-term risks, such as terrorism, conflict and rule of law. Somalia marginally retains its status as the highest risk country for the 7th year, over Syria in 2nd place, followed by Central African Republic (3rd), South Sudan (4th), Iraq (5th), Libya (6th), Afghanistan (7th), DR Congo (8th), Sudan (9th), and Yemen (10th). Nigeria (11th), Pakistan (12th) and Myanmar (13th) are on the cusp of the ‘extreme risk’ category 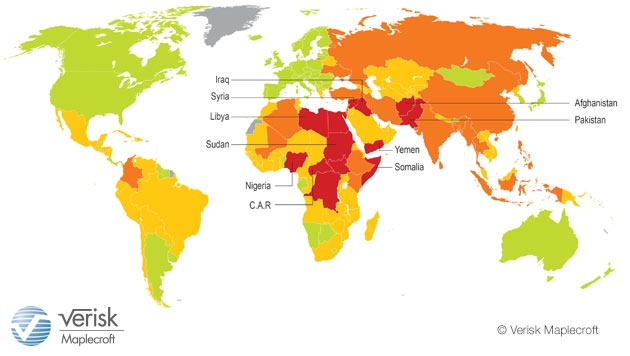 Despite attempts to combat the Islamic State, we expect the upward trajectory of terrorism and political violence to continue over 2015. Outside of Syria, Iraq and Nigeria, we highlight Egypt and Libya as countries to watch, as terrorist incidents have nearly doubled in the past year.

“Corruption not only undermines overall governance levels, but also serves as a key source of popular dissatisfaction.”

In recent years, corruption, coupled with a lack of political will to combat the problem, has been one of the main drivers of mass demonstrations in Brazil, India, Ukraine and Venezuela. With nearly 70% of countries rated as ‘extreme’ or ‘high risk’ in our Corruption Risk Index and 41% in the Civil Unrest Index, widespread discontent is likely to remain a significant feature of the global political risk environment in the short-term.

Divisive elections in key markets are identified as potential flashpoints for large scale incidents of civil unrest and political violence in 2015. Africa’s largest economy, Nigeria, will almost certainly witness an increase in violence around February’s controversial presidential election. The country, which is rated by the PRA as ‘extreme risk’ for terrorism, conflict, civil unrest and human security, is set to go to the polls amid a growing North/South divide, institutional corruption and an ineffective response to the threat of Boko Haram.

Political unrest also constitutes a high risk in the run up to Myanmar’s (13th) general elections in late 2015. Early reforms have helped move the country out of the ‘extreme risk’ category for the first time since the inception of the PRA in 2008. However, the military maintains control over the reform process and the constitutional amendments sought by the opposition face strong resistance from the military leadership.

Unrest in Venezuela (26th highest risk in the Dynamic Political Risk Index 2015) will continue to grow in 2015 as the country moves towards contentious parliamentary elections in December, while investors in Thailand (47th) face continued uncertainty. Elections intended to return the country to democracy now appear unlikely to take place in 2015 and growing concerns over the royal succession present a further source of risk. Beyond this, the failure to address the underlying causes of 2014’s mass unrest heightens the potential for further instability.

Four of our ten highest risk countries – Central African Republic, South Sudan, Libya and Yemen – are increasingly unlikely to see elections take place as scheduled in 2015, highlighting how extreme and persistent levels of political violence and regime instability conspire to prevent the worst performing nations from establishing even basic forms of governance.

We flag Russia (21st and ‘high risk’) as a grave source of political risk uncertainty in 2015. In 2014, Russia’s actions in Ukraine contributed to the latter experiencing the biggest deterioration in the Dynamic Political Risk Index, falling from 82nd to 20th highest risk during the year. Resulting Western sanctions have effectively shut major Russian corporations out of international financial markets and barred energy firms from further operations in Russia’s oil sector.

As Russia’s economic situation deteriorates there is a high risk that the Putin government will attempt to maintain its authority and popular support by triggering external conflicts. Already, Putin and other senior Russian officials have claimed the US and other Western states are actively seeking to weaken or destroy Russia as a sovereign state. NATO has simultaneously reported a dramatic increase in Russian military flights and other probing activities, heightening the risk of serious security incidents due to accidents or miscalculations by either side.

The Political Risk Atlas 2015 provides a comprehensive appraisal of 54 ‘dynamic’ and ‘structural’ political risks which impact business operations, investment and supply chains. Dynamic risks are those which change rapidly over a relatively short period (the next few quarters) and include political violence, business and macroeconomic risks and the degree of good governance. Structural risks, by contrast, are those that evolve incrementally over time and which are ingrained features of a country or society. The Atlas assesses, quantifies, compares and monitors political risks and responsibilities in 198 countries around the world with scorecards for each country and maps for each issue. These include sub national maps for countries where conflict and political violence represents extreme or high risk.

Will Turkey rock the boat for E&P in the East Med?

Join us at the 2020 PDAC Convention