Hardening immigration policy in the US, which is increasing the risk of modern slavery and labour abuses against undocumented workers, has emerged as one of the top drivers of human rights risks for business in 2017.

The Human Rights Outlook 2017 draws on our portfolio of global human rights data and its interactions with multinational companies to assess the top 10 human rights issues impacting business in the year ahead. A major theme of the report is that human rights risks are now surfacing closer to home for Western companies just as legislation strengthens and scrutiny of business practices increases.

A by-product of the Trump administration’s stance on tightening immigration in the US is that companies with supply chains relying on low-skilled, migrant labour will face increasing risks of modern slavery. Stricter deportation rules for 8 million undocumented migrant workers will push them further underground, while a US-Mexico border wall would increase criminal trafficking fees, leaving migrants more deeply mired in debt and vulnerable to exploitation.

The report identifies agriculture, construction, manufacturing and hospitality as the sectors facing the highest risk, due to their dependence on migrants for informal, low-paid work. Commodity risk data in the report reveals the risk of migrant labour exploitation is already ‘high’ or ‘extreme risk’ in the production of fruit in Florida and California. At a national level, a sharp decline in the security of America’s underclass of migrant workers will also shift the US from ‘medium’ to ‘high risk’ in our Modern Slavery Index. For companies sourcing within the US, a revision of auditing priorities, which have traditionally concentrated in less mature markets, may now be needed. 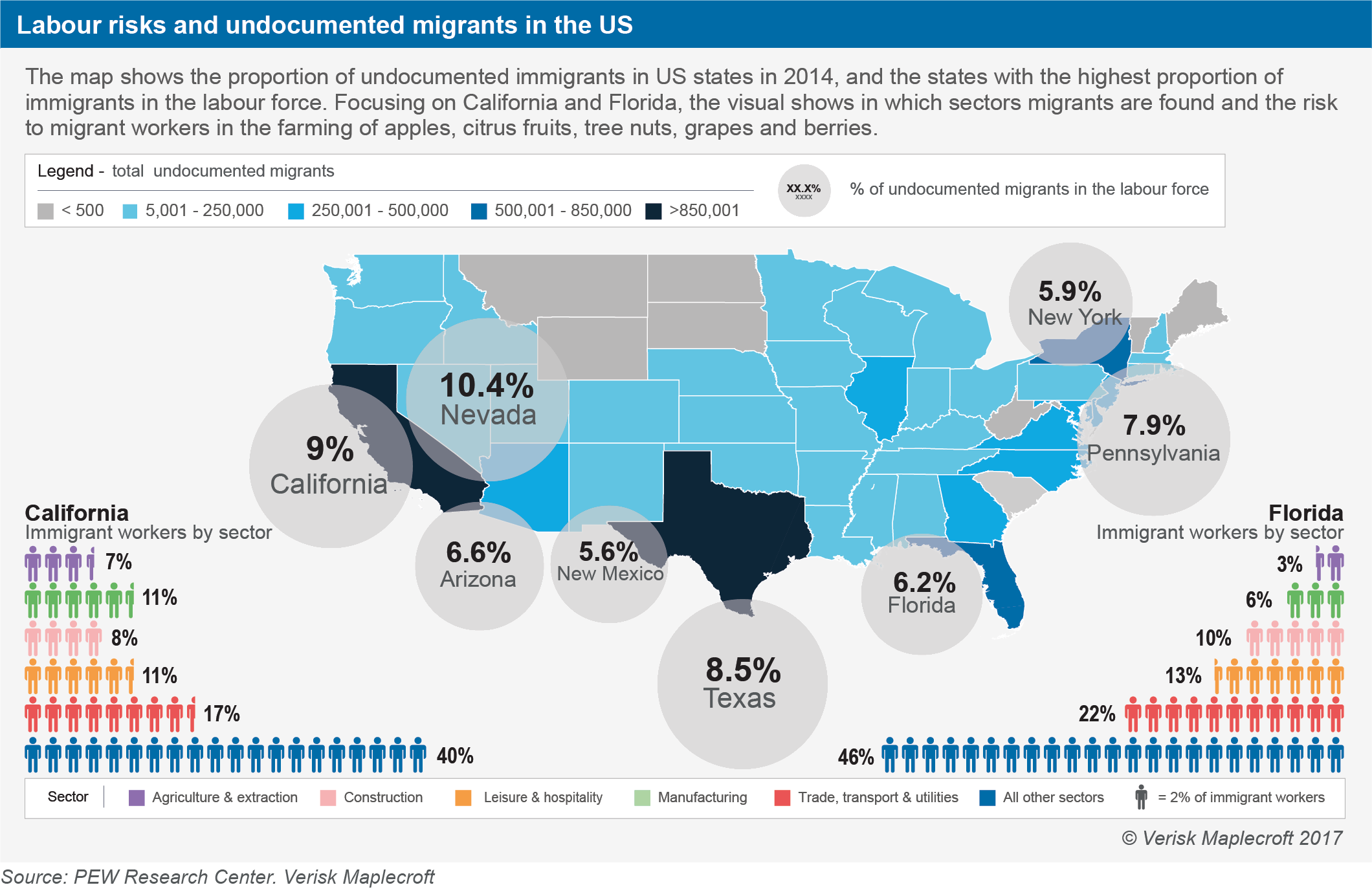 Our research finds that companies focusing their human rights due diligence efforts on the production of raw materials and manufacturing are creating high risk, supply chain blind spots. The seafarers who transport 80% of global trade, truckers and workers in warehouses are mostly invisible in supply chains, despite being highly vulnerable to modern slavery and other labour rights abuses. Similarly, low-skilled workers in support services, like cleaning, security or catering, across more developed economies are often forgotten when companies conduct human rights risk assessments.

Seafarers are highlighted in the Outlook as being particularly at risk of modern slavery because they lack state protection. Germany is picked out as a prime example of where these risks lie. The country has almost 4,000 large merchant vessels, but 80% are registered under foreign flags of convenience, meaning they are subject to less stringent regulation of maritime labour rights. Under flags of convenience, Panama, Liberia and the Marshall Islands host 40% of world ship tonnage in their registers, but are all rated ‘high risk’ in our Maritime Labour Rights Index.

Rising scrutiny of the money trail behind ‘land grabs’ in the emerging markets is an issue we sees gaining more traction in 2017, as Western banks and funds are subject to a rising trend of NGOs mapping investment webs to connect land deals to capital markets. Commodities, such as palm oil, sugar cane, rubber, and bio fuels, are driving a global rush for land. Companies not undertaking proper due diligence of land deals they are funding could become associated with forcible evictions or even violence against local land owners.

The Human Rights Outlook reveals that most land deals are conducted in countries where the rights of land owners have the least protection, such as Indonesia, Ethiopia, Mozambique and Argentina. British banks and funds are flagged as being particularly exposed to the risk of association with ‘land grabs.’ In 2016, 17 of the top 20 countries in which UK firms were investing in land deals were in the ‘high’ or ‘extreme risk’ category of our Land and Property Rights Index.

Expanding legislation across Western markets means mandatory human rights due diligence on supply chains could soon become the norm for multinational companies. Failure to get it right will now come with a hefty price tag in key jurisdictions since the passing of new laws in France and the Netherlands. More countries are set to follow suit, with legislation likely to emerge in Switzerland next.

Companies covered by the French Duty of Care law (Le Devoir de Vigilance), the Dutch Due Diligence Child Labour Law, and the pending Swiss Responsible Business Initiative, will have to implement human rights due diligence in their supply chain. The trend to move from voluntary to mandatory reporting means the costs of non-compliance are increasing, but we believe making human rights due diligence a standard business practice will create commercial opportunities for early adopters of best practice.

“Mandatory disclosure makes it more likely that consumers, shareholders and investors will vote with their wallets for ethical companies who can prove their respect for human rights,” says Dr Alexandra Channer, Principal Human Rights Analyst.

The German Supply Chain Due Diligence Act: A Simple Guide