US energy policy is governed by a determination to secure a steady and cheap supply of oil to buttress domestic economic activity. The Trump administration has gone further than its predecessors in articulating a vision of ‘energy dominance’ rather than the traditional push for ‘energy security’. Domestically, the administration has sought to scale back federal environmental regulations and loosened energy infrastructure constraints put in place by the Obama administration.

Abroad, President Trump himself has been consistent in his calls for OPEC to maintain a level of supply that keeps oil prices low. As early as 2011, Trump repeatedly used his platform on Twitter to attack OPEC and what he considers artificially high prices.

US sanctions policy towards Iran and a confused stance on the Libyan conflict, however, appear to run counter to this overall priority of keeping oil markets well-supplied. This compounds the devastating effect that US pressure and sanctions have already had on oil exporter Venezuela. We examine US policy on Iran and Libya below.

One year since nuclear exit - what now for Iran?

It is now more than a year since Trump’s decision to exit the nuclear agreement between Iran and world powers. Last May, the message was clear: the US will implement the “highest level” of sanctions against Iran.

A year later, the official policy is still zero Iranian oil exports. But Washington’s Iran policy is a puzzle for oil markets. The decision to grant eight countries temporary waivers to continue importing reduced volumes of Iranian crude oil and condensates in November 2018 caught oil markets, OPEC and Saudi Arabia off guard. As highlighted by the chart below, oil exports from Iran almost doubled between November 2018 and March 2019 when total volumes exceeded 1.9 million bpd.

The sharp fall in April back down to the 1 million bpd mark is a direct result of Washington’s decision to not renew import waivers that expired in early May. However, the implications of Washington’s hardening stance on Iran are still unclear. Firstly, the ongoing trade war between the US and China is a major complicating factor. Aside from the obvious impact on the demand side, the direction of talks will be a crucial factor in determining the extent to which China complies with US sanctions.

Secondly, oil markets will need to gauge how synchronised Saudi Arabia and the UAE are with US efforts to drive down Iranian exports further. Riyadh, Abu Dhabi and Washington clearly have an informal understanding that involves the two Gulf monarchies replacing Iranian barrels taken off the market by US sanctions. In practice, however, there will almost certainly be divergence over the extent, pace, and duration of Saudi and Emirati efforts to meet increased demand.

Preliminary figures suggest that Iranian oil exports will fall toward the 500,000 bpd mark in May; if Riyadh and Abu Dhabi are out of sync with Washington, diminished supply will place upward pressure on oil prices. A lag in the response from Saudi Arabia and the UAE is likely. Unlike last year, they will want to make sure there is a sustained physical shortage before increasing supply.

Washington’s hardening Iran stance also adds to the risk premium associated with the Middle East. In short, the more successful Washington is in removing Iranian barrels from world markets, the greater the tensions between the two countries and the greater the incentive for Iran to disrupt the flow of oil from the Persian Gulf.

Iranian threats to disrupt tanker traffic through the Strait of Hormuz are nothing new. Renewed threats in April to close the strait nonetheless warrant greater concern than in the past. Previous threats have lacked credibility as the vast majority of Iranian oil exports are shipped through strait. However, a further reduction in Iranian oil exports in May would push Iran into unchartered territory below 1 million bpd. As Iranian exports decline, Tehran’s threshold for taking measures to disrupt traffic through the Strait of Hormuz will fall in parallel.

The risk of supply disruption in the Persian Gulf has been brought sharply into focus by a “sabotage attack” against four oil tankers near the Emirati port of Fujairah on 12 May 2019 and a Houthi drone attack against two pumping stations along Saudi Arabia’s East-West pipeline two days later.

Details of both attacks are still scant. But an investigation carried out by the Norwegian Shipowners’ Mutual War Risks Insurance Association is reported to have concluded that Iran’s Revolutionary Guard is “highly likely” to have facilitated the 12 May attack. Although the Saudi authorities have not implicated Iran directly in the incident, Riyadh continues to accuse Iran of supplying Houthi rebels with weapons that are used by the group against Saudi Arabia. Houthi attacks against Saudi Arabia will almost certainly continue. In the current regional environment, the risk of a Houthi missile or drone attack sparking a confrontation between Saudi Arabia and Iran is high.

The increasingly tense regional environment is a significant complicating factor as the US attempts to push down Iranian oil exports without pushing up prices. Even if Washington can maintain effective cooperation with Saudi Arabia and the UAE, it is unlikely that the Trump administration will be able to pressure Iran further without adding to an already high Middle East risk premium.

Libya under fire - will oil and gas production be disrupted?

On 4 April 2019, the Libyan National Army (LNA) under the command of Khalifa Haftar launched an offensive on the Libyan capital of Tripoli, under the control of forces affiliated with the internationally-recognised Government of National Accord (GNA). The fighting has ground down into a protracted stalemate, with neither side willing to give in or able to gain a military advantage.

So far Libya’s oil and gas production has not experienced major disruption as a result of the fighting - most infrastructure is situated away from the frontlines. Despite this, oil market jitters over the renewed conflict already contributed to Brent price rising above USD70 in early April 2019. 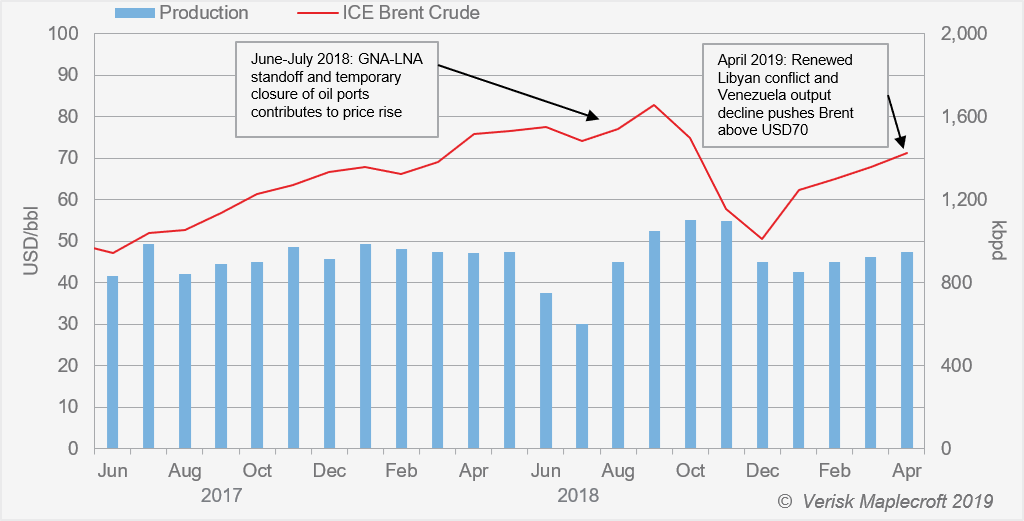 The continuing fighting, however, is dragging in men and resources and deepening a security vacuum in the rest of the country – exposing oil infrastructure to attacks. In May, Islamic State (IS) claimed an attack on a checkpoint near the Zillah oil field and further attacks by the group against energy infrastructure are to be expected. This followed another abortive attack by an anti-LNA militia group on the El Sharara oil field, Libya’s largest producing asset (300,000 bpd).

The LNA has also renewed efforts to sell oil independently of the internationally recognised National Oil Corporation (NOC). The last time the LNA engaged in similar attempts, when it tried to transfer the control of Libya’s export ports to a parallel and illegitimate NOC based in the east of the country, it provoked a crisis that took 450,000 bpd off the market. Owing to these security and political concerns, Mustafa Sanalla, the NOC chairman, claimed recently that as much as 95 percent of Libya’s approximately 1.1 million bpd of production are under threat unless an immediate ceasefire is reached.

Oil production and disruption in Libya 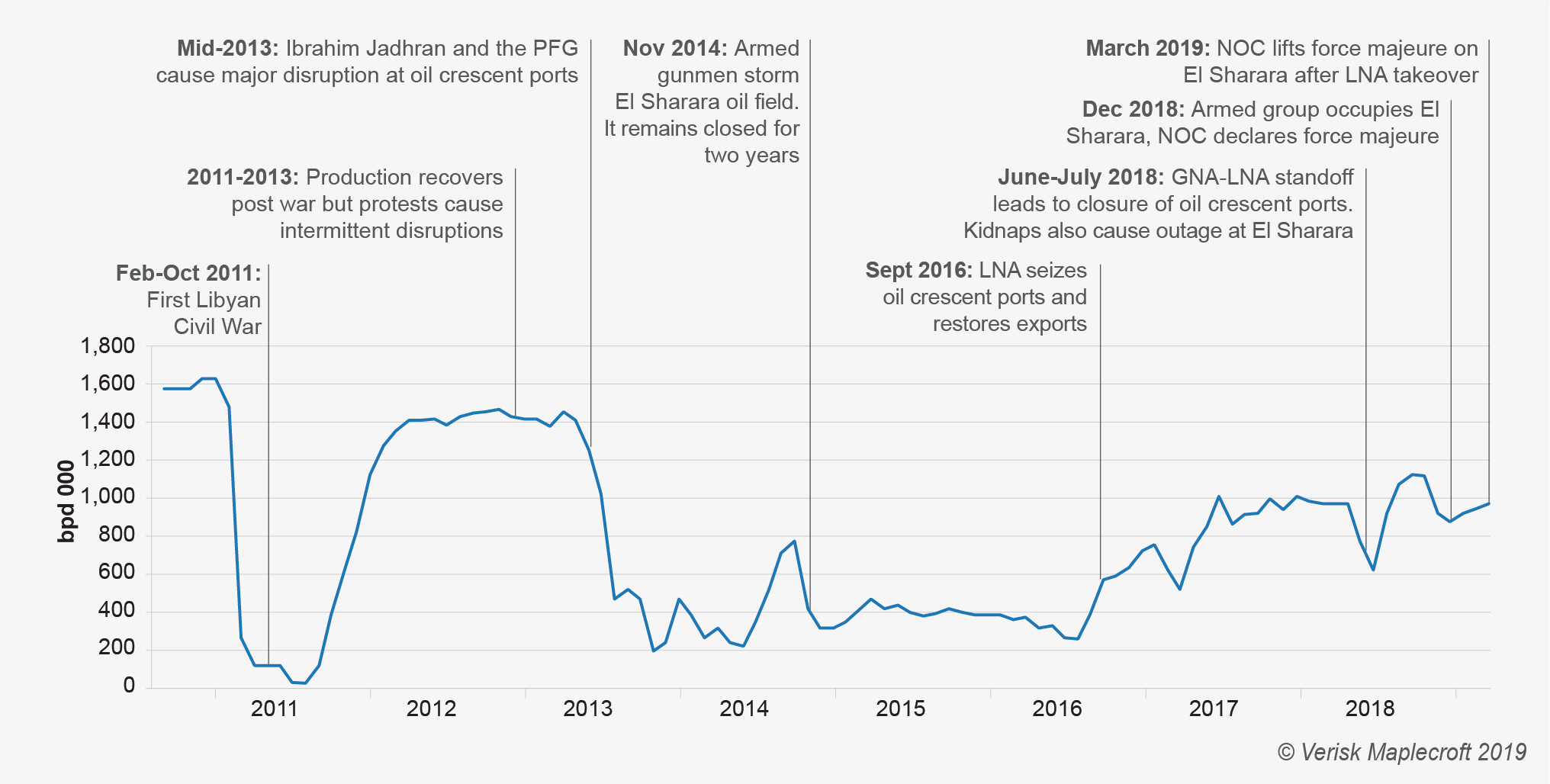 Oil production and disruption in Libya

Trump-Haftar call opened a can of worms

The US has played a critical role on oil-related matters in Libya in the past, and is the only actor with the political and military influence to broker a ceasefire that would reduce disruption risks. Last June’s crisis over the control of the oil export ports, for example, was brought to a swift end when the US effectively vetoed the LNA’s attempt to sell oil independently of the recognised NOC.

This potentially influential role, however, is hobbled by muddled US policy. Initially, the US position on the offensive appeared to be unequivocal. In a statement on 7 April 2019, Secretary of State Mike Pompeo called for an immediate halt to the “unilateral” military campaign and stated that “there is no military solution to the Libya conflict”.

Two weeks later, however, Bloomberg reported that President Trump and his National Security Advisor John Bolton had telephoned Haftar and expressed support for the Tripoli offensive. A White House spokesperson later stated that the calls between Haftar, Trump and Bolton were mischaracterised, but didn’t provide any further detail.

As it stands, then, US policy towards Libya is in flux. While this remains the case its potential role as a mediator will remain on ice. Arguably, this confused stance has stoked the conflict, as both main parties, to attract US and international sympathies, have made increasingly outlandish claims about the other. The LNA spokesperson, for example, claimed on 30 May 2019 that the leader of the GNA is a “terrorist” and “no longer a partner in peace”.

The US still has time to reclaim its role as a mediator, but calm diplomacy has not been a hallmark of the Trump administration. This is not good news for the prospects of a ceasefire that would put a lid on disruption risk in the country.

Wishful thinking on supply may be saved by weakening demand

In official statements, the White House has shrugged off concerns about sanctions exacerbating a supply shortage. Instead the administration has argued that the US shale industry and OPEC members friendly to US interests will plug the gap.

This is far from fool-proof. In the short term, increased US shale production will not be a substitute for customers with refineries built for Iranian blends. As for OPEC’s spare capacity, the Saudi government has publicly expressed its reluctance to raise production. Saudi officials could be forgiven for their scepticism over US demands, given the US’ unexpected move of granting oil waivers on Iranian oil imports in October 2018 – which resulted in a plunge in oil prices.

Weakening oil demand may yet eliminate the risks posed by tightening supply, and recent developments certainly point in this direction. The US-China trade talks remain unresolved, and Asian oil refiners are reportedly considering reducing their output.

Nevertheless, during Q3 2019 the market will be faced with declining Iranian output and limited spare OPEC capacity. This means that a supply shock from a military confrontation in the Gulf or a Libyan outage could have major impact on prices. 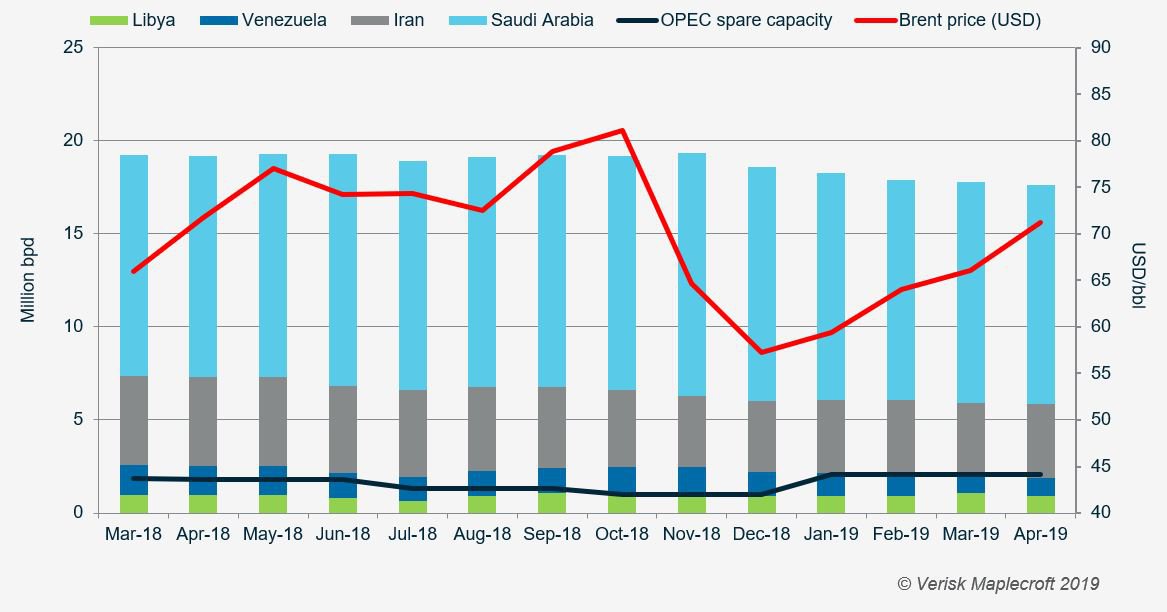