UK’s economic exposure to flooding among world’s highest, US, China, India most at risk

The UK is among the countries with the greatest risk to their economic output from flooding, behind only to the US, China, India, Bangladesh, Germany and Japan, according to our 4th annual Natural Hazards Risk Atlas, which warns the situation could worsen in the face of climate change.

The Natural Hazards Risk Atlas, which assesses 197 countries on physical and economic exposure to 12 types of natural hazards, including flooding, storm surge, earthquakes, tsunamis, cyclones, wildfires and volcanoes, is produced annually to assist companies and insurers to identify risks to assets worldwide, down to 22km².

While we rank the UK as 42nd most at risk for physical exposure to flooding, the country’s high population density and the proximity of commercial centres, private property and infrastructure to areas susceptible to flooding means its total non-agricultural economic exposure to flooding is the 7th highest globally. 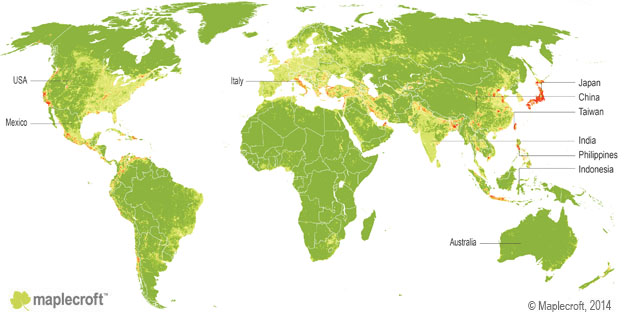 Intense storms, known as extra-tropical cyclones, which have seen England and Wales suffer the wettest January since records began, are considered the most operationally disruptive and costly natural hazard facing northern Europe. According to our results, the UK’s economic output has the world’s highest exposure to extra-tropical cyclones, followed by Norway, Russia, Sweden and the US.

Our findings are illustrated by the recent succession of extra-tropical cyclones that have battered the UK’s coastal defences, damaged transport infrastructure and flooded large swathes of England. While putting a precise figure on the costs of the recent storms is difficult, the Environment Agency has estimated that 175,000 commercial properties are at risk across England and Wales, while Governor of the Bank of England, Mark Carney, suggests the UK’s economy will suffer in the near-term.

The Natural Hazards Risk Atlas also analyses the socio-economic resilience of a country by calculating its capacity to mitigate and manage natural hazard risks. Despite the UK’s high physical and economic exposure, we rate the UK’s resilience to flooding and other natural hazards, as one of the best in the world, ranking it 184th out of 197 countries, due to its spending power and robust infrastructure and institutions. While the UK is well placed to rebound from the impacts of natural hazards, the country’s physical exposure to intense storms means that resilience in the country will continue to face severe tests.

“Predictions for the UK suggest climate change is likely to boost the frequency of major storms and increase risks to economic output as a result of flooding.” states Dr Richard Hewston, Principal Environment Analyst. “The future scale of the problem will depend heavily on the government continuing to build resilience and apply resources through flood mitigation and risk management schemes.”

Global economic exposure to natural hazards on the rise

In our Natural Hazard Risks – Absolute Economic Exposure Index, which factors in non-agricultural economic exposure to hydro-meteorological and geophysical hazards, including seismic risks and tropical cyclones, Japan, US, Taiwan, China, India, Mexico, the Philippines, Italy, Australia and Indonesia make up the ten countries facing the highest total financial costs from natural hazards, while the UK is ranked 16th most at risk.

The concentration of global economic output in countries facing substantial natural hazard risk is set to rise. The share of global economic output in countries categorised as ‘extreme risk’ in our Absolute Economic Exposure Index 2014 is projected to increase from 44.3% to 49.9% by 2025. Much of this economic growth will occur in markets that are highly susceptible to natural hazards, such as Bangladesh, India, Indonesia and the Philippines, which all feature as ‘high risk’ in our Socio-economic Resilience Index.

Many emerging markets have demonstrated minimal improvement in their capacity to prepare for, mitigate and manage the impacts of natural hazards. However, Myanmar is one of the only countries to exhibit strengthening resilience, due to recent political reforms which have led to improved stability and governance. Further steps, including the formation of the Myanmar Disaster Preparedness Agency, have resulted in the country improving its ranking in the Socio-economic Resilience Index from 11th most at risk in 2011 to 39th in 2014 and moving from ‘extreme’ to ‘high risk.’

In general, the majority of economic losses from natural disasters occur in advanced economies, while fatalities are concentrated in lower income nations. However, Typhoon Haiyan, which devastated the Philippines in November 2013 and left more than 6,200 dead, also resulted in US$10 billion in economic losses, representing 4% of national GDP. The frequency of natural hazard events in the Philippines – a major destination of foreign direct investment – illustrates the challenges of building resilience when resources are repeatedly channelled into recovery rather than preparedness and mitigation.

“While significant investment opportunities lie in the growth economies, they are exposed to significant natural hazard risks and have a constricted capacity to bounce back when disaster strikes,” states Professor Alyson Warhurst. “The private sector has a critical role in building resilience in these countries and companies engaged in disaster risk reduction will see benefits through greater investor confidence, direct cost savings and improved social licence to operate.”

Corporates set to foot the bill in battle to combat deforestation