Corporates are asking ‘where now?’ after 2020 deadline for sustainability goals.

Companies face key decisions on where to focus sustainability resources and strategy over the coming decade, while under pressure from shareholders, customers and employees to increase transparency and accountability.

Organisations rejecting company-centric goals in favour of jointly working towards external benchmarks. 2020 seemed a long way off when companies were setting corporate sustainability goals in the early 2000s. Fast forward to 2019 and the endpoint is in sight. Shareholders are now starting to demand not only new targets, but new ways to measure progress – look at Shell linking executive bonuses to emissions targets.

Currently, only around one in five companies have set emission reduction targets to 2030 or beyond. This leaves them out of sync with the shift to long-term targets demanded by the influential TCFD recommendations and those governments that have set out net zero pathways by mid-century. More than 130 countries pledged to limit emissions by that date under the Paris Agreement, but the rise of right wing populists in major economies in the last two years and the concurrent rise in global emissions puts the onus on business to pick up the climate baton.

Even so, curbing emissions is far from the only game in town. Companies looking to 2030 will have this year to decide whether to also address air pollution, water quality, loss of species and habitats and the growing mountains of waste that will take thousands of years to break down.

In the past five years, reports from the UN, the World Bank and NGOs like WWF have clearly shown that economic activity is pushing the boundaries of what the planet can support. The concurrent rise of reporting on forests and water – and increasing alignment with science-based benchmarks – shows that boardrooms recognise that a wide range of topics need to be tackled and they may not have the expertise internally to do this. This realisation suggests that when setting the next generation of sustainability goals this year companies will not focus just on what they think they can achieve, but instead work towards collaborative, cross-industry partnerships or align with overarching initiatives like the Sustainable Development Goals. 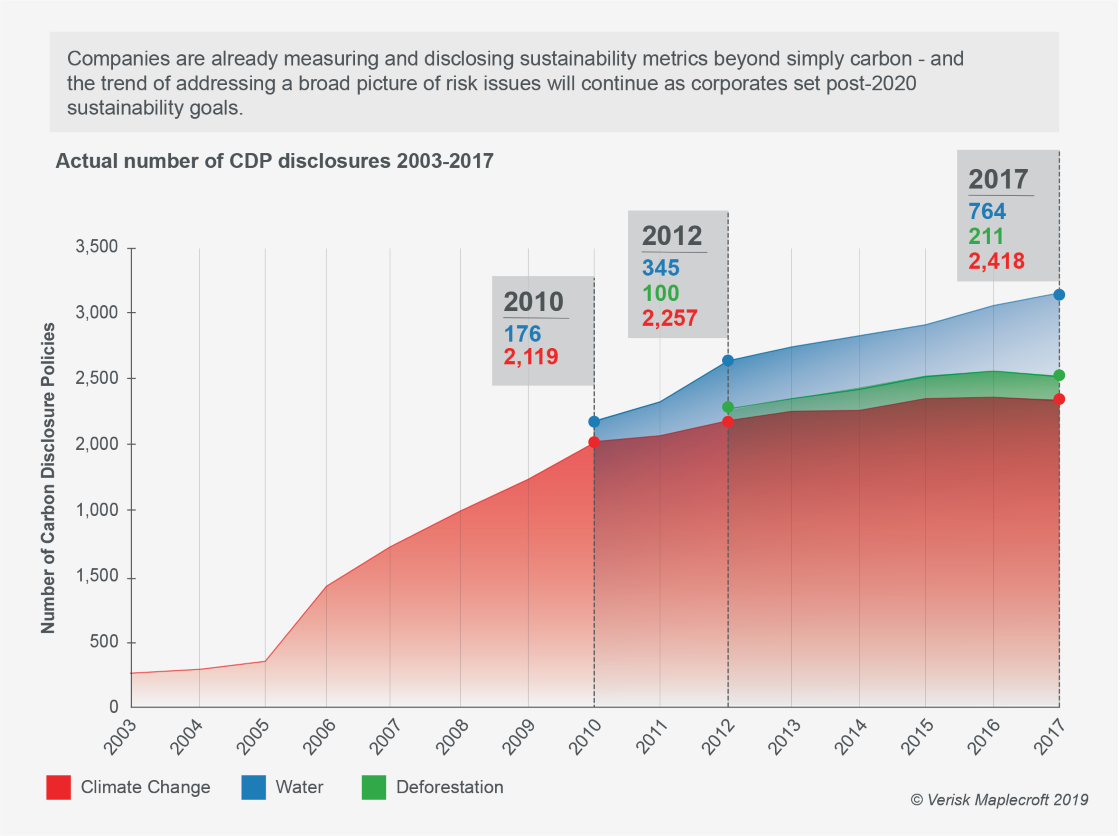 Creating corporate profiles of the most material risks and opportunities will help companies identify which topics to target and where they are happy to let others lead. Fully embedding sustainability into the way a company does business, joining industry-wide partnerships with definite and comparable benchmarks, and creating KPIs that enable meaningful assessment of progress towards those benchmarks, will go some way to allaying investor concerns.

How can companies work towards sustainability targets?

Register to download our Environmental Risk Outlook webinar and slides