The supply chain risks that could blemish cosmetic reputations

Recent years have seen a surge in demand for natural and organic beauty products, and cosmetic brands have responded by using more naturally-occurring ingredients. But while consumers are clamouring for makeup made with all manner of fruit, nuts, grains and minerals, companies that increase the proportion of natural ingredients in their cosmetics could be opening a Pandora’s box of risk. A whole range of commodity-based ingredients are linked to severe ESG risks on cosmetics supply chains that could blemish the reputation of the multi-billion-dollar cosmetics industry.

About 30% of the ingredients used in the cosmetics assessed are derived from either mined or agricultural commodities. The challenge for cosmetics companies is to balance the necessary secrecy around the thousands of formulations they use to create their products, with the transparency that consumers and regulators increasingly expect in relation to how and where ingredients are sourced. But to achieve transparency, cosmetics companies must first dig into the depths of their extensive and complex cosmetics supply chains to find out the risks that may lie hidden there.

We investigated the environmental, social and governance (ESG) risks associated with commodity-based ingredients commonly used in best-selling products in five categories of cosmetics from face cream to lipstick. What we found was that there was at least one high-risk commodity in each product’s ingredient list, with risks ranging from child labour and deforestation through to corruption.

Numerous commodities used in mainstream cosmetics are linked to ESG risks across every continent. The production of cocoa, commonly used as cocoa butter and balm in face and body creams, has been prominently linked to child labour in Cote d’Ivoire, the world’s leading producer. Similarly, vanilla, shea nuts, copper and silk, often used in foundations and creams, have all been reportedly produced using child labour in the last five years in at least one of their major producing countries. And carnauba wax or candelilla wax, which provide a wax base for many mascaras, have been tainted by associations with working hour violations in Brazil and Mexico, respectively. 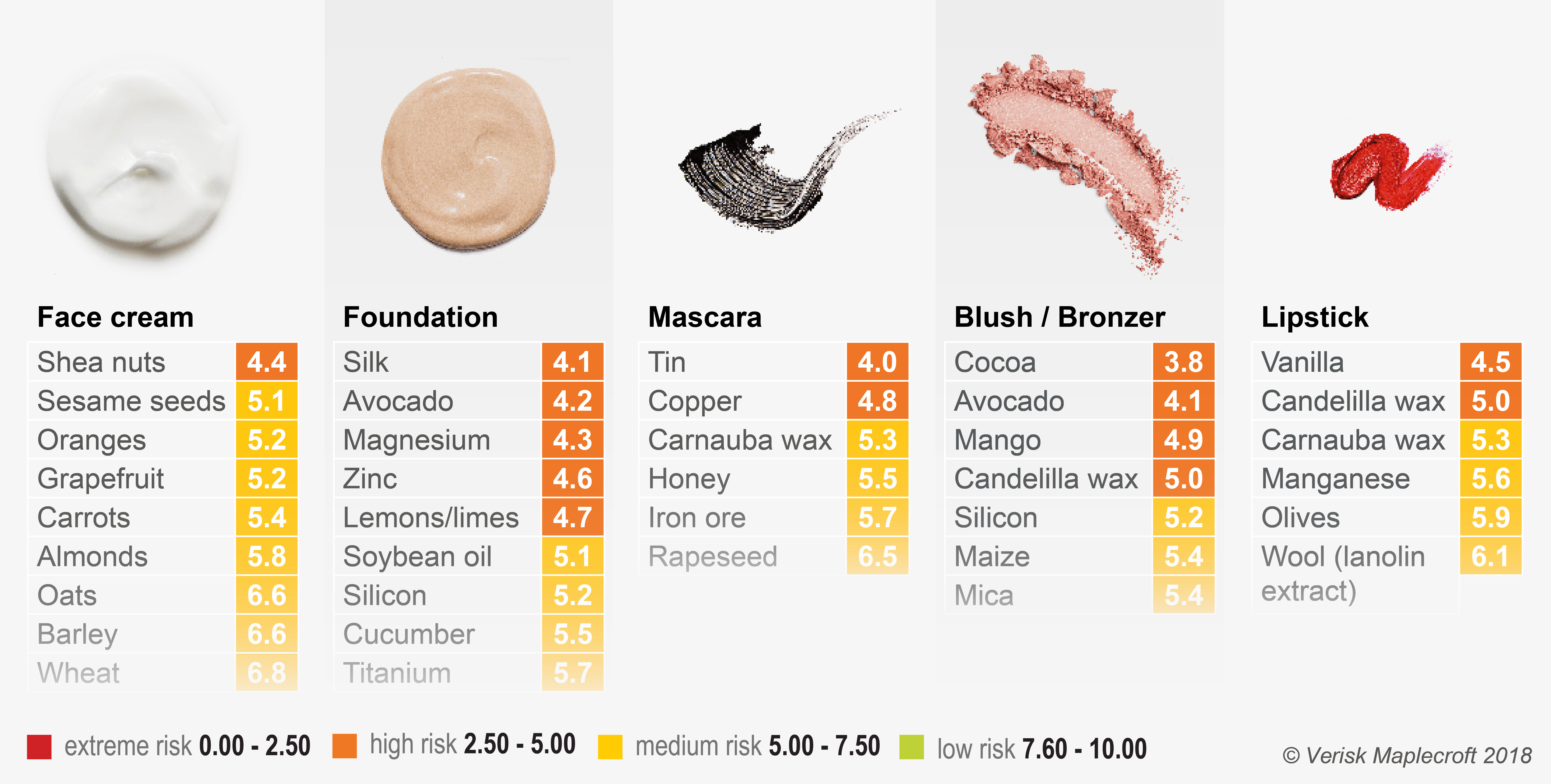 Mined commodities used in cosmetics are associated with forced labour in at least one of their major respective producing countries. Mica, a mineral used to add glimmer and pigment to cosmetics, has been tarnished by its connection with child and forced labour in India, and yet it is still widely used by cosmetics manufacturers. Across the products we assessed, mica was found in 100% of blush / bronzers, 60% of foundations and lipsticks, and 40% of mascaras.

Cosmetics supply chains also have a significant environmental footprint, which has brought allegations of deforestation and water pollution. While it is well known that the cultivation of palm oil has caused severe deforestation in Malaysia and Indonesia, grains such as oats, barley and wheat – often used as extracts in face creams and foundations – have been linked to water pollution in major producing countries ranging from France to India, China and Australia. The fact that many key commodities – including shea nuts, cocoa, and carnauba and candelilla wax – are produced by smallholders is a key driver for the high levels of risk.

Indeed, companies with smallholder farmers in their cosmetics supply chains can face a higher risk of being associated with labour violations ranging from child labour and working hour or wage violations to informal employment and occupational hazards. Governments rarely have the resources or scope to monitor or uphold regulations relating to working conditions and sustainable operations at this level, while businesses also struggle to keep track of the large number of individual farms used by their suppliers.

Scrutiny of suppliers and transparency key for the cosmetic industry

Cosmetics companies must source a vast range of ingredients for the dozens of new products they release each year, and this creates a huge challenge for procurement departments when it comes to identifying – let alone managing – the potential risks attached to core commodities.

Given the depth and breadth of the cosmetics supply chain, tracing and monitoring the tiers of production is virtually impossible, as the cosmetics company Lush found when it made the commitment to remove all traces of mica from its products in 2014. It became clear that even though the company could stop its direct use of mica, it was unable to guarantee that the mica in many pigments supplied by third parties had no association with child labour. As of 2018, the company is using only synthetic mica.

Abandoning the use of key commodities altogether is not always possible or practical, and could also deprive stakeholders of their livelihoods in developing economies. The answer then is for companies to ensure that their due diligence procedures and audits are of the highest quality. In October 2017, a documentary revealed the punishing working conditions on Brazilian farms producing carnauba wax – an ingredient used in mascara. In this instance, the reputational damage was not to a cosmetics brand but to a multinational sweet manufacturer, whose products contain the wax. However, the revelations should have raised alarm bells in the board rooms of global cosmetics brands.

Certification schemes not a silver bullet

Companies, including major cosmetics brands, have relied increasingly on the growing number of certification schemes to help them tick the sustainable procurement box. But these schemes do not guarantee the absence of risk in cosmetics supply chains. Certification bodies including the RSPO, UTZ and the Rainforest Alliance have faced mounting criticism by NGOs for failing to uphold their own labour and environmental guidelines, which have also been attacked for being too weak. What’s more, some commodities used in the manufacturing of cosmetics – such as candelilla wax – are not produced to a scale that justifies a certification body.

The pressure on businesses to do the right thing has led some to craft their own in-house standards. Unilever, for example, has its own Sustainable Agriculture Code, while L’Oréal has implemented a Sustainable Sourcing Methodology and has committed to improving the environmental and social profile of 100% of its products by 2020. While such home-grown approaches may give a business greater oversight of its supply chain, only time will tell whether they can stand up to the scrutiny of consumers and NGOs demanding transparency.

Ethical consumerism is here to stay, and it has significant influence over the shopping decisions made by millennials, so scrutiny of what goes into the millions of cosmetics produced every year will continue, and demands for transparency will increase. When a brand’s reputation is at stake, it is worth remembering that the cosmetics supply chain is only as strong as its weakest link.