1.4bn people in South Asia, 81% of the region’s population, are acutely exposed to at least one type of natural hazard and live in areas considered to have insufficient resources to cope with and rebound from an extreme event.

A lack of resilience to hazards across the region, especially in India, Pakistan and Bangladesh. These governments have struggled to translate record levels of economic growth into improved resilience against natural hazards, leaving investors open to disruption to economic outputs, risks to business continuity and threats to human capital.

To reach its conclusions, we assessed the risks posed by 11 types of natural hazards, including tropical cyclones, floods, winter storms, earthquakes, wildfires and tsunamis in 20 new risk indices covering 198 countries. The research forms part of its annual Environmental Risk Dataset, which has been developed to help companies identify risks to their assets, personnel and supply chains.

India lags behind US, China and Japan in capacity to mitigate natural disasters

Crucially though, South Asian nations lag behind the world’s leading economies when it comes to mitigating the worst impacts of natural hazards. Our Natural Hazards Vulnerability Index, which assesses a country’s ability to prepare for, respond to, and recover from a natural hazard event, rates Japan (183) and the U.S. (173) as ‘low risk,’ and China (126) ‘medium risk’. In comparison, the weaker institutional capacity, financial resources and infrastructure of Bangladesh (37), Pakistan (43) and India (49) mean they are rated ‘high risk,’ leaving companies and populations there under greater threat if a significant event strikes. 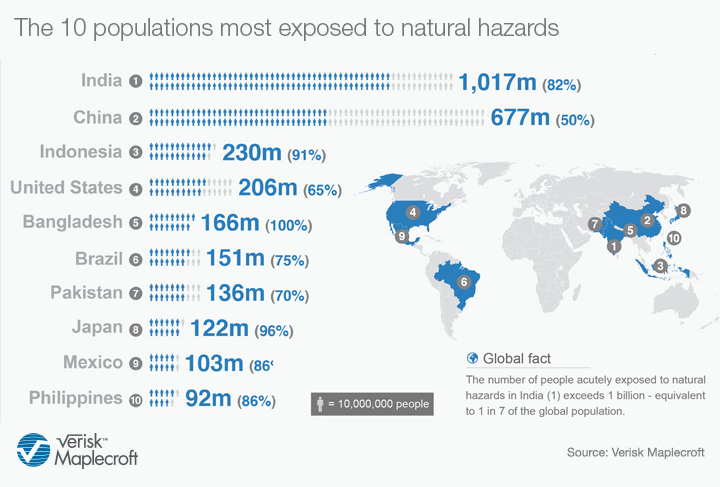 The data identifies flooding as one of the most substantial risks to communities and business in South Asia. In India alone, 113 million people, or 9% of the population, are acutely exposed to flood hazard, with a further 76 million exposed in Bangladesh and 10 million in Pakistan. Indeed, heavy monsoon rain in November-December 2015 sparked record flooding in South India, which cost the country upwards of US$3 billion and displaced more than 100,000 people.

In its city-level analysis, we flag the populations of three South Asian cities among the 10 most exposed globally. These include the major garment producer Dhaka in Bangladesh (ranked 5th most exposed) and the rapidly growing tech hubs of Kolkata (6) and Delhi (9) in India. Manila, Philippines (1), Tokyo, Japan (2), Jakarta, Indonesia (3), Dongguan, China (4), Osaka, Japan (7), Mexico City, Mexico (8) and Sao Paolo, Brazil (10) complete the list.

Resilience to natural hazards lowest in Africa and South Asia

“This data highlights the scale of the task facing governments and business in mitigating the threats to populations and workforces from natural hazards in these high risk regions,” states Dr James Allan, Director of Environment.

“With overseas investment pouring into the emerging Asian markets, companies have an increasing responsibility to understand their exposure and work with governments to build resilience.”

Outside of Africa, South Asia is the most vulnerable region. Despite progress in recent years, rapid economic growth is yet to translate into the development of resilience at the community level, including bolstering healthcare and education provision. Additionally, the capacity of these countries’ building stocks to withstand hazards is typically inadequate. This was evident during the April 2015 earthquake in Nepal (31), where a lack of institutional capacity and poor infrastructure contributed to a death toll of more than 9,000 people and left many communities isolated for days afterwards.

Our 2016 Environmental Risk Dataset features comparable business risk data and sub-national mapping for 198 countries across 40 separate issues, including climate change vulnerability, ecosystem services, greenhouse gas emissions, environmental regulation, and natural hazards. The Dataset is available via an integrated data and mapping portal, alongside an extensive portfolio of indices quantifying the key political, economic and human rights risks, which has been developed to enable multinational organisations to identify, prioritise and manage threats to global operations, supply chain continuity and corporate reputations.