The Guinean government on 13 July issued a tender for the smaller half of the Simandou iron ore resource: blocks 1 and 2. The controversial Israeli investor Beny Steinmetz relinquished control of the assets in February, after agreeing an out-of-court settlement with the Guinean government, bringing an end to their protracted legal feud.

The Guinean mining minister Abdoulaye Magassouba trumpeted that the reissued tender will be “open, competitive and transparent”. Such contracting terms would represent a major break with the past in Guinea, where mining deals have historically been opaque and clouded by allegations of corruption.

The next day, Sheikh Ahmed Dalmook Juma Al Maktoum, an Emirati prince, signed a memorandum of understanding (MoU) with the Liberian government to upgrade the existing railway from the Guinean border to the Port of Buchanan. The deal could provide Guinean iron ore deposits with a more commercially viable export route than the proposed USD8 billion trans-Guinean railway. The Sheikh is no stranger to the region, having secured a lucrative power supply agreement for his Ameri Group with Ghana’s former NDC government. Upon coming to power in 2017, the now ruling NPP judged the contract to be overpriced by USD150 million and set about renegotiating terms.

The presence of Australian iron ore giant Fortescue Metals Group’s (FMG) chairman, Andrew Forrest, who in a video appeared to sign the MoU, has set off speculation that the company is the frontrunner for the Simandou blocks. FMG has denied that it signed the MoU, claiming Forrest was present in a philanthropic capacity.

We project a 71.9% probability of Guinea remaining in the extreme risk category until 2021-Q3 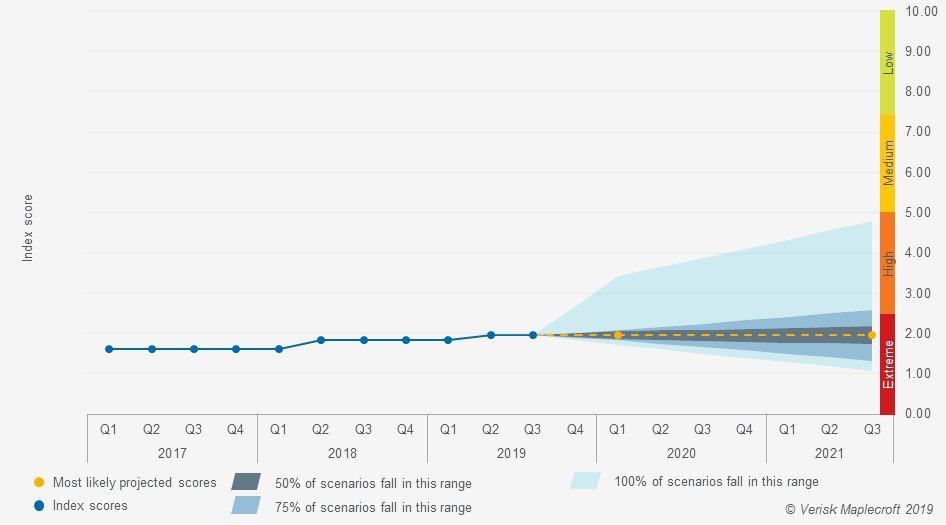 We project a 71.9% probability of Guinea remaining in the extreme risk category until 2021-Q3

Short deadline and high threshold - was the Simandou tender predetermined?

The tight turnaround of the Simandou tender will force mining companies to scramble to prepare offers – prospective bidders must express interest by 2 August and offers are to be finalised within 30 days. Firms must fork out USD300,000 by 19 August for the privilege of accessing the tender specification documents, which are otherwise not publicly available. Such pay-to-play terms undermine the minister’s claims of transparency.

Assertions that this is an open tender are similarly questionable. Investors would be hard-pressed to find an example of a Guinean mining tender in which the government disclosed the full list of bidders, never mind the relative value of their offers against the tender’s scoring criteria.

It is true that the process is more transparent than the first-come, first-served method, but bidders may still be exposed to reputation risks. There are indications that the British law firm Phanar Legal Ltd, selected as the third-party transaction adviser for the tender, may have a conflict of interest. The firm’s director Philip Rogers is a co-director of Guinea Bauxite Corporation Ltd (GBC), a mining company established in January 2019 by Alexander Zotov, a Russian businessman. Zotov holds an active production licence for a bauxite mine in coastal Guinea through his mining company Eurasian Resources (EAR).

Even if Rogers acts only as a secretary for these companies, his active interest in the Guinean mining sector leads one to question his law firm’s impartiality in the Simandou tendering process. In other words, Phanar’s management of the tender could lead the contracting authorities to look favourably on a prospective bid by one of Zotov’s companies for another mine concession.

The FMG chairman’s presence at the meeting between the Emirati prince and President Weah remains suspicious, however much the company’s public relations teams may refute assertions that he signed the MoU. The Liberian minister of state for presidential affairs, Trokon Kpui, admitted in a press conference that the meeting in Monrovia was the result of Weah’s visit to Guinea, just three days earlier.

Should FMG emerge as the winner of the Simandou blocks, it would provide compelling evidence that Guinean mining tenders are transparent in name only. On the other hand, if the government makes the full list of bidders and their relative scores public, it would go a long way towards improving Guinea’s score for contract publication, a key indicator on our Corruption Index. The country currently scores 1.96/10, placing it alongside Nigeria and Zimbabwe. We project a 71.9% probability of Guinea remaining in the extreme risk category until 2021-Q3 (see chart).

If FMG fails to secure the Simandou concession, however, the key determinant for a winner will likely be their proposal for development of the trans-Guinean railway, which the government had previously insisted on coupling to the Simandou project. It has long been argued that the Chinese are the only investors with sufficient risk appetite and appropriately deep pockets to soak up the costly railway investment. However, the 60% rise in iron ore spot prices since January 2019 is likely to have shifted the calculation for multinational mining companies.