China is taking steps to ensure that shale gas blocks are managed more efficiently. The need to build a considerable amount of additional infrastructure will stimulate the construction industry and domestic demand for steel. But despite political pressure to fast-track shale gas projects, China is likely to fall short of its 2020 output target.

What is the situation for China's shale gas?

China’s two main shale gas regions, both located in the Sichuan Basin, reached a new combined production record of over 10 bcm in 2018, supporting green development and the government’s bid to transition from coal to gas. However, such a performance is far behind the target set by the National Energy Administration (NEA) for China's shale gas to produce 30 bcm per annum by 2020.

In December 2018, the Ministry of Natural Resources (MNR) decided to reduce the size of 19 shale gas blocks that were licensed to 16 independent companies during China’s second shale auction in 2012. The move is designed to enhance production efficiency as the licensees had failed to meet investment obligations.

Has the Chinese government made a difference?

Although China has been going to great lengths to boost domestic shale gas production, the efforts of 2018 do not seem to have had much impact at existing fields. The government’s decision to punish underperforming operators by reducing the size of their blocks is a step in the right direction in terms of encouraging more effective management of China's shale gas blocks.

What is the risk level for China's shale gas blocks in the Sichuan Basin?

Our Corporate Exposure Tool (CET) shows that the shale gas blocks located in the Sichuan Basin are categorised as medium-to-high risk across a range of above-ground risks (see below).

The MNR needs to ensure that the shale gas blocks are accompanied by attractive investment incentives and robust development framework sufficient to outweigh the risks that characterise such fields.
-Kaho Yu, Senior Political Analyst, Asia 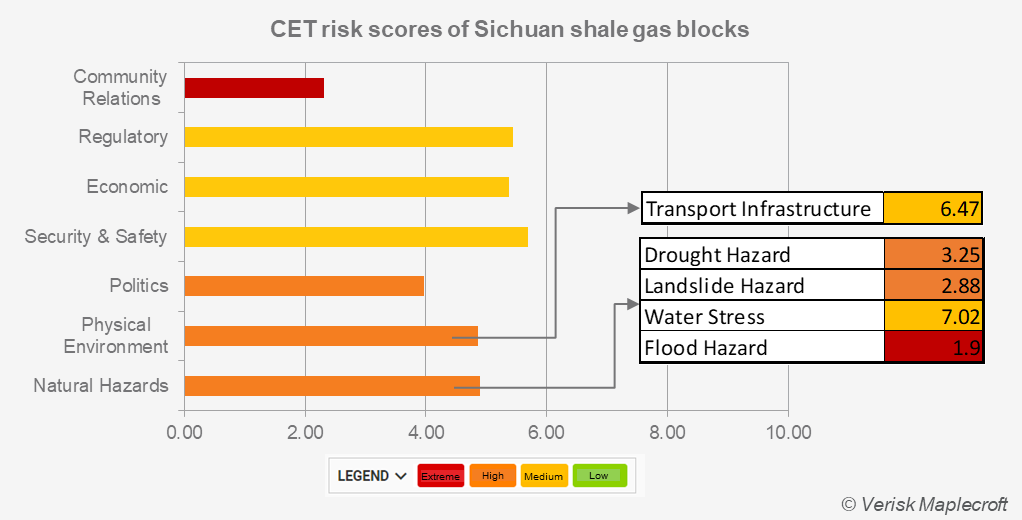 A lack of infrastructure in the highly mountainous Sichuan Basin requires operators to build their own roads and water pipes that connect to the shale gas sites. A considerable amount of additional infrastructure will need to be built in the area, given that China plans to develop over 700 new wells in pursuit of its 2020 gas production target.

What is the outlook for Sinopec and PetroChina?

The Chinese government is highly supportive of shale gas development as part of its efforts to promote the use of natural gas and cleaner, greener development. State-owned Sinopec and PetroChina will likely come under political pressure to fast-track their shale gas projects in the Sichuan Basin and ramp-up output volumes.

Nevertheless, the technological and infrastructural challenges that have impeded China's national oil companies and other domestic players from making rapid progress are not going to disappear overnight.

We forecast that China’s shale gas output in 2020 is likely to fall short of the official target.

The NEA expects that the need to build additional gas infrastructure in the Sichuan Basin will have the added benefit of stimulating the construction industry and domestic demand for steel.

Will government instability in Asia hinder oil and gas investment? Read the article