The ability of workers to communicate directly with businesses is becoming increasingly important for companies, NGOs and trade unions. For businesses trying to tackle labour rights violations and exploitation in their operations and supply chains, hearing the ‘worker voice’ is crucial to ensuring compliance with international standards. However, for effective dialogue to take place, workers must feel free to raise grievances in an independent forum, free from intimidation and employer interference.

But as our data shows, approximately 43% of countries fall into the extreme or high risk category in our Freedom of Association and Collective Bargaining Index. This means that 63% of the world’s workers experience serious restrictions on their right to join or form independent unions and bargain collectively. This presents major challenges for companies that recognise the value of union representation in combating issues such as unethical recruitment, forced labour and unsafe working conditions. 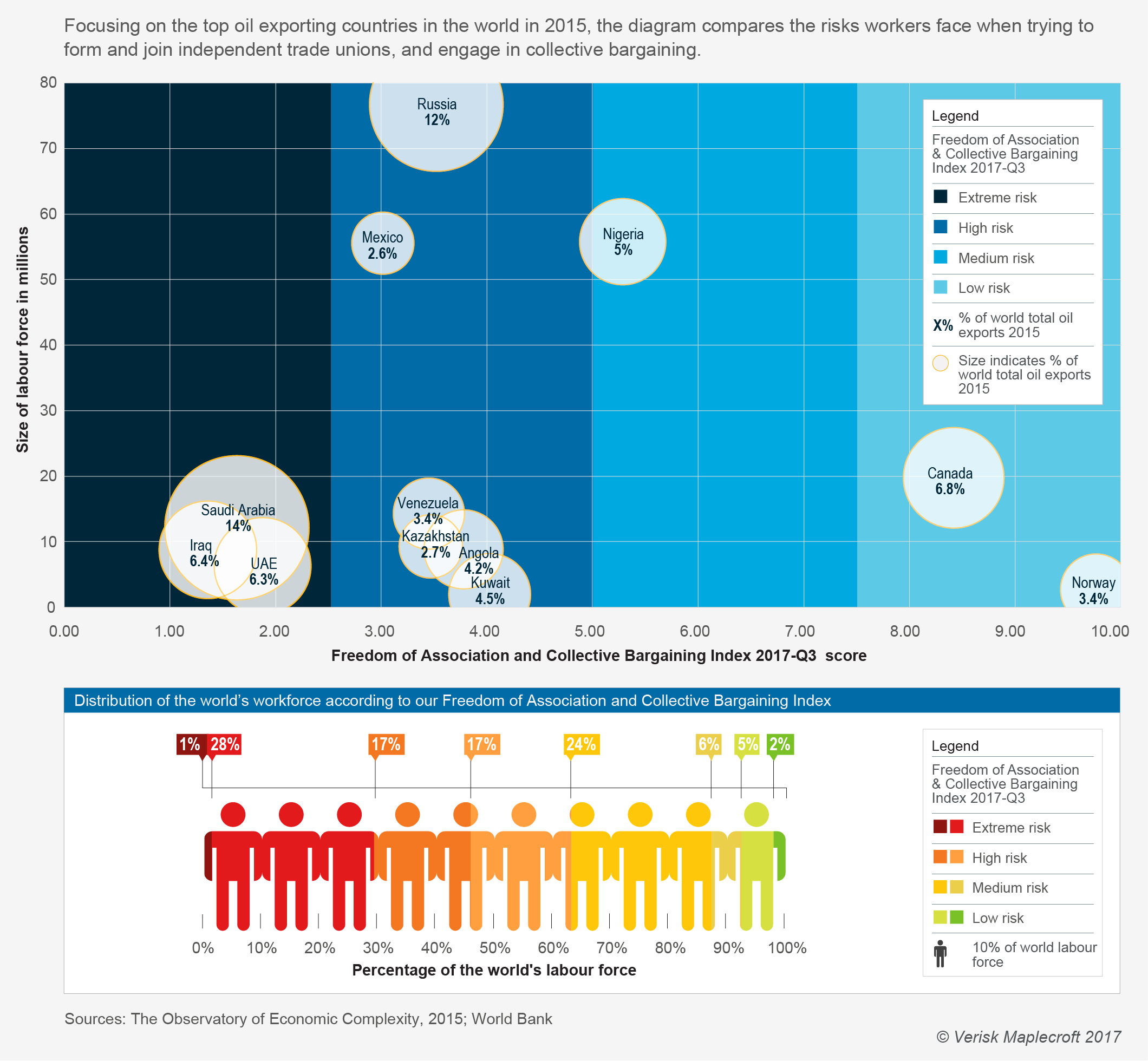 Our visual shows that the majority of oil is exported from countries that place restrictions on freedom of association and collective bargaining. Given the hazardous nature of the industry, hearing the worker voice is one way in which oil companies can ensure health and safety standards are met, both within their own operations and in those of suppliers and subcontractors. Where businesses cannot rely on the national labour inspectorate, engaging with workers becomes even more important for identifying and dealing with violations. Russia, for example, which accounted for 12% of global oil exports in 2015, has 2,144 labour inspectors; only 56% of the total number required by the ILO for an economy of its type. Weaknesses in the state’s capacity to monitor and enforce labour laws contribute to Russia’s categorisation as a high risk country in our Occupational Health and Safety Index.

While international oil companies are becoming increasingly aware of the need to engage with workers in a representative manner, often the environments they operate in are hostile towards unions. For example, in Saudi Arabia, the world’s largest oil exporter, trade unions are outlawed. In many other oil producing countries, authorities actively repress unions and harass union leaders.

In Kazakhstan, the recent jailing of a trade union leader is just one example of the severe restrictions Kazakh workers face in relation to their right to freedom of association and collective bargaining. Amin Yeleusinov, chairman of the Oil Construction Company trade union, is the second union leader to be imprisoned in the country in the last three months. Charged with embezzlement of funds and disobeying state officials, his case highlights the harassment that many union leaders face. 1 His lawyer has argued that the charges were politically motivated, while the International Trade Union Confederation and the UN Special Rapporteur on Freedom of Association and Assembly have also expressed serious concerns about the case.

Kazakh authorities have been incrementally restricting workers’ rights since the killing of at least 14 oil workers by police during protests in Zhanaozen in 2011. The introduction of a new trade union law in 2014 and a new labour code in 2016 has made it more difficult for unions to register, while workers are regularly subject to fines or arrested for participating in strikes or protests. In one of the most extreme cases, 400 oil workers went on hunger strike in protest at the forced closure of the Confederation of Independent Trade Unions in January 2017. Dozens of the protesting workers were subsequently arrested and fined, accused of causing USD$9,000 worth of damage to their employer.

Nevertheless, restrictions on workers’ right to unionise does not completely prevent strike action and protests, as the Kazakhstan example shows. For workers in many national oil companies, where working conditions are poorer and wages lower, the use of strike action continues to be a way to channel grievances that are otherwise not heard. The risk for international oil companies is that strike action in national companies may cause solidarity movements to spread within their own operations, resulting in delays and potential violent crackdowns by the police and other security forces. In a country like Kazakhstan - which is facing an upcoming political transition - underlying socio-economic discontent risks transforming worker strikes into widespread social unrest. This situation is also likely in OPEC’s ‘Fragile Five’ (Nigeria, Venezuela, Algeria, Iraq and Libya) which face a mixture of social, political and security-related issues that severely impact stability.

While many international oil companies have implemented policies that commit to protecting the right to freedom of association and collective bargaining, in practice, these are often constrained by the laws and regulations of the countries in which they operate. Several initiatives are in place to try and overcome these barriers, including the introduction of workplace councils and the use of technologies which provide a platform for workers to report issues and air grievances. As well as helping to identify violations of labour standards, these platforms also enable businesses to understand the needs of workers and develop wellness and training initiatives that improve productivity and retention. While these may go some way to reducing complicity in the restriction of fundamental labour rights, companies may find themselves associated with serious human rights violations if confidentiality is compromised and employers or authorities retaliate against workers.