Internationalisation of ISIS among top concerns

The global turbulence of 2015 is set to continue in the coming year, according to our 2016 Political Risk Outlook, which forecasts little respite from the political instability, civil unrest, economic volatility, security crises and geopolitical rivalries that defined the last 12 months.

We highlight low commodity prices as one of the primary drivers of political risk for investors in major producing countries across Africa and Latin America, while the increasing international threat posed by the Islamic State and rising tensions between Iran and Saudi Arabia are flagged among the foremost geopolitical risk multipliers.

Risk of food insecurity and civil unrest in sub-Saharan Africa 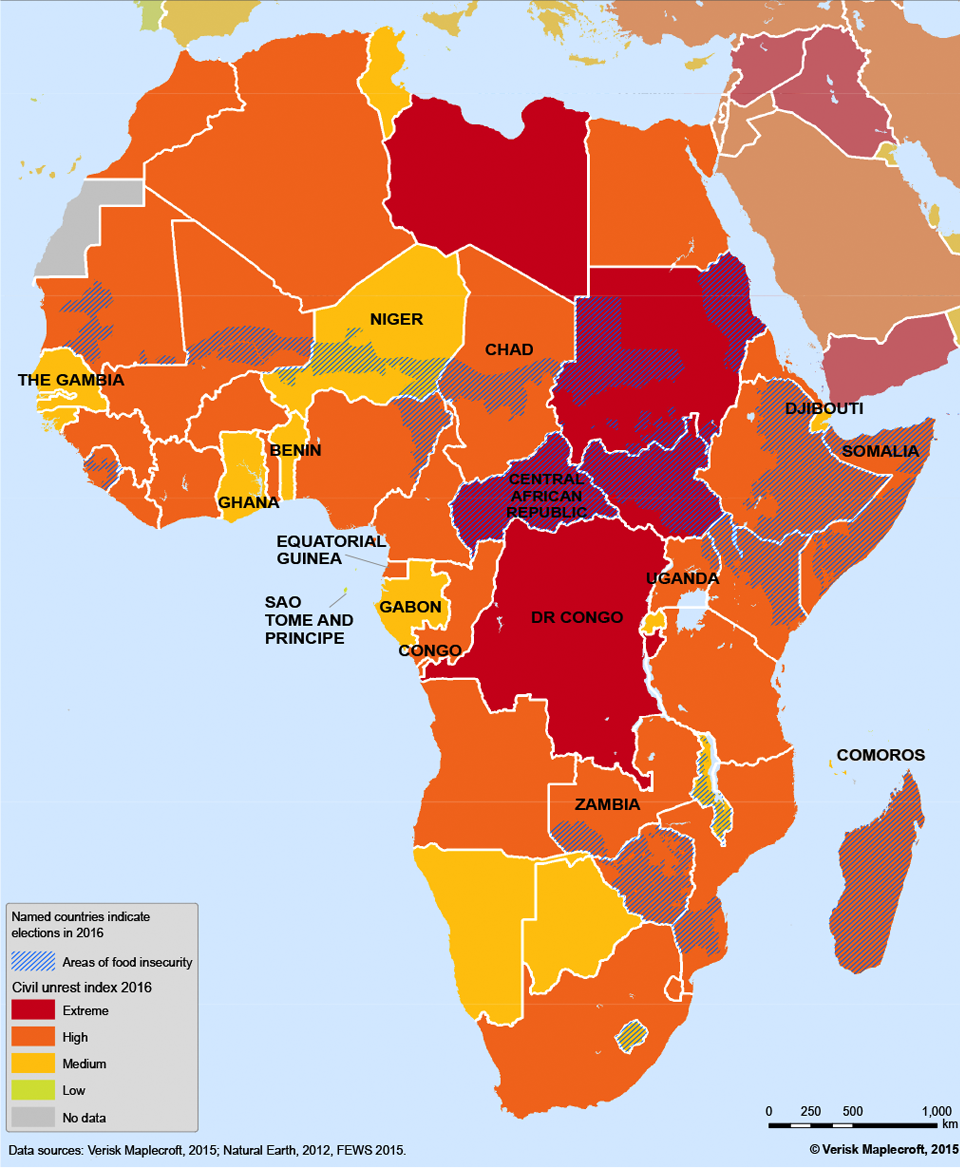 Risk of food insecurity and civil unrest in sub-Saharan Africa

Job losses in the extractive sector of Africa’s resource-rich countries are expected to provoke industrial action, while the impacts of depressed oil, gas and metals prices on domestic government spending and rising living costs across the region are likely to stoke social turmoil.

The fact that 31 of sub-Saharan Africa’s 49 countries already fall within the ‘high’ or ‘extreme’ risk category of our Civil Unrest Index 2016 underscores the threat of disruption for companies operating in these markets. Countries to watch include Central African Republic, Sudan, Kenya, Ethiopia, DR Congo, South Africa and Nigeria.

The risk of civil unrest will be compounded by a strong El Niño event extending into early 2016, which may increase the cost of food staples as a result of reduced rainfall negatively affecting agricultural outputs. Our Food Security Index 2016 shows that all but five African countries are considered ‘high’ or ‘extreme’ risk.

The end of the commodities boom that fuelled Latin America’s decade-long growth has laid bare the profligacy of South America’s two largest economies, Brazil and Argentina, and the largest oil producer in the region, Venezuela. The effects of lower commodity prices, coupled with chronic economic mismanagement, dealt heavy electoral losses to the ruling parties of Argentina and Venezuela in late 2015. Both countries will experience a rise in political instability as they make the painful adjustments necessary to get back on a more sustainable growth track.

In Brazil, corruption and economic recession will dominate the political landscape. The ongoing impeachment process against President Dilma Rousseff is unlikely to be successful, but it will ensure protracted legislative gridlock during 2016 and prevent the passage of the reforms required to arrest the deteriorating fiscal landscape and restore investor confidence. The mass anti-government protests witnessed in 2015 are set to continue and could spike in the run-up to the summer Olympic Games in Rio de Janeiro.

The region’s economic problems are compounded by social concerns over graft, increasing the risks of political and civil instability in 2016, as the emerging lower middle class see its socioeconomic gains threatened or reversed. Our Corruption Risk Index 2016 identifies Argentina, Colombia, Ecuador, Peru, Venezuela and Brazil as posing a ‘high’ or ‘extreme’ risk.

Global terrorism threats on the rise

We recorded an estimated 7,750 conventional terrorist acts in 2015, and the company doesn’t expect the global risk from terrorism to diminish in 2016, with the Middle East and Africa on the frontline in the fight against radical Islamists. Islamic State will remain resilient in Syria and Iraq, despite the international coalition’s efforts to defeat the group. This is due, partly at least, to a lack of alignment between the agendas or methods of key local, regional and global powers involved in Syria and Iraq.

As the international coalition doubles-down on its efforts to eradicate Islamic State, the group is expected to add momentum to its terrorist campaign well beyond its heartland in Syria and Iraq. Armed groups which have pledged allegiance to Islamic State in such countries as Egypt, Libya and Nigeria will figure prominently in 2016, exacerbating existent security concerns in these countries. As made abundantly clear during the November 2015 Paris attacks, Western intelligence agencies will continue to struggle to manage the risk posed by returning Western members of the Islamic State and by lone wolf attackers at home.

For Europe, populist parties will seek to drum up further support amid the ongoing inward flow of migrants. Public disillusionment with the EU, the uneven pace of economic growth in the eurozone, in combination with concerns over record levels of inward migration, will sustain pressure on the political mainstream. This could make government policy and legislation less predictable and less conducive to business.

Whether the UK has a future in the EU and whether Greece can hold onto the euro will likely be determined in 2016. A negative vote in a UK referendum on the issue would cause months of severe uncertainty for business within the United Kingdom and mainland Europe. Meanwhile, Greece’s future in the common currency will depend on Athens’ continued readiness to execute painful structural economic reforms and service its national debt (and whether the reforms actually succeed).

Geopolitical tensions will remain acute in a number of world regions through 2016. Tehran and Riyadh will almost certainly fail to bury the hatchet, instead intensifying their struggle for influence and power in the Gulf, Levant and beyond. Escalating conflict through proxy forces could increase the risk of disruption to business operations and supply chains in the MENA region. The execution by the Saudi authorities of the prominent Shi’ite, Sheikh Nimr al-Nimr, in early January has caused a full rupture in bilateral diplomatic ties, with Iran’s supreme leader predicting divine vengeance.

Supreme Leader Ali Khamenei may pursue an increasingly confrontational foreign policy in a bid to appease hard-line elements in the Revolutionary Guard and clerical establishment who oppose the nuclear agreement that was signed by Iran and world powers in July 2015. The test-firing of Iranian rockets near American warships in the Strait of Hormuz in late-December is a case in point.

Russia’s President Vladimir Putin has engaged more closely with Western countries in the fight against the Islamic State and has at least temporarily reduced the number of Russian resources committed to the Ukraine conflict. However, Western sanctions are unlikely to be dropped in 2016. It is no coincidence that Russia is classified as ‘high risk’ in our Legal and Regulatory Environment Index 2016.

The crisis between Russia and Turkey over the shooting down of a Russian fighter jet in December 2015, and Moscow’s continued support for Syria’s President Bashar al-Assad and, importantly, its refusal to stop meddling in Ukraine will remain points of friction with the United States and Europe. 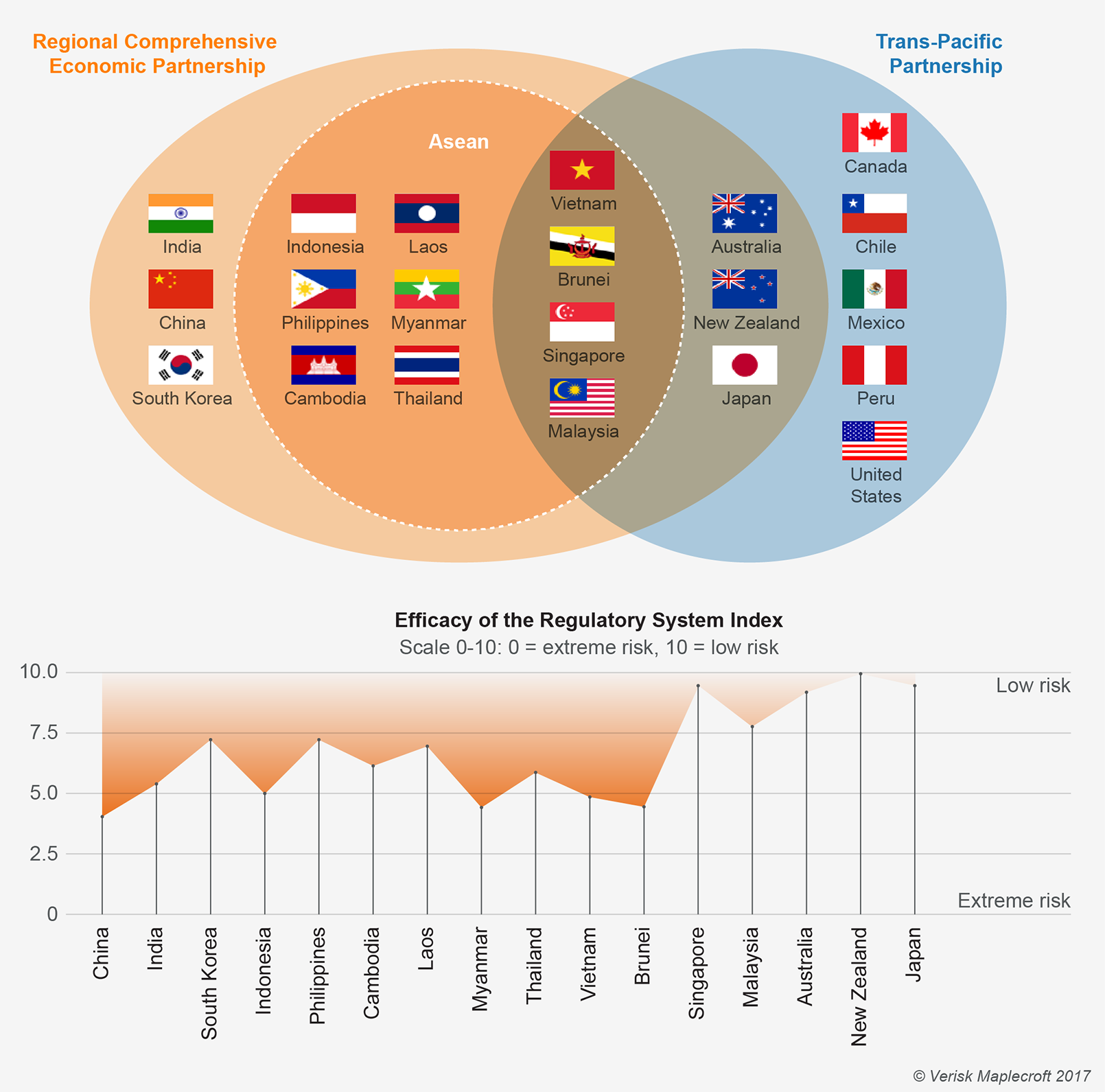